Kissing a guy should be a pleasant and exhilarating experience.

Using a bit of tongue while kissing makes things even more exciting… but, what about when he doesn’t seem to like tongue-kissing?

Read on below, and explore these 10 reasons why some guys don’t kiss with their tongue!

Why Do Some Guys Not Kiss With Tongue?

1. He’s Baiting You in For Sex

When a guy doesn’t tongue kiss, or at least not often, but you feel like he may be pretty good at it, and holding back from you, he could be baiting you. 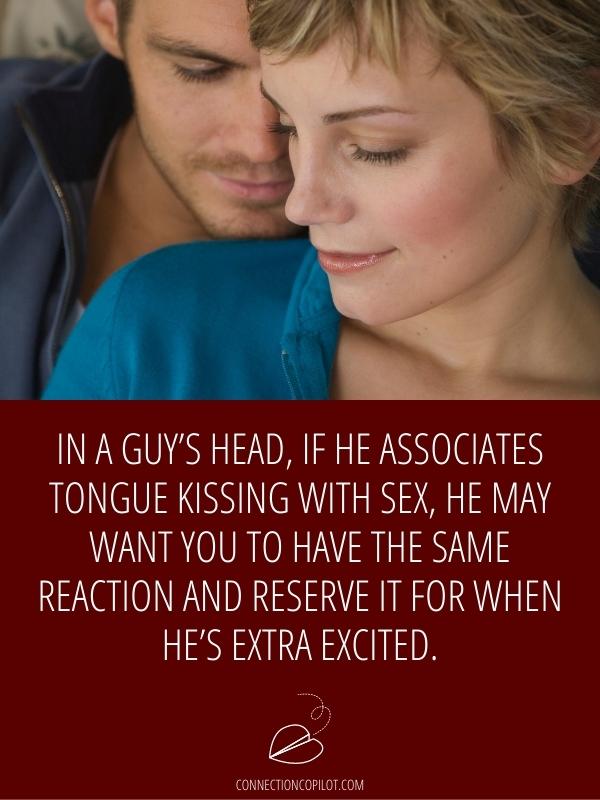 In a guy’s head, if he associates tongue kissing with sex, he may want you to have the same reaction and reserve it for when he’s extra excited.

2. He’s Not Feeling Things on That Level

If a guy just isn’t feeling you on that level(romantically/sexually), it’s not unusual for him to not use his tongue to kiss you. It’s nothing against you, but in his mind, tongue kissing is something to be shared with someone you’re super-intimate with.

The good thing is that if things continue between you, tongue kissing could well be in your future.

3. He Kisses With His Tongue When He’s Excited

Some guys hold back on the tongue kissing until they are really excited and want you to know it. In these cases, it’s more or less him saying “hey, baby, let’s go!”. 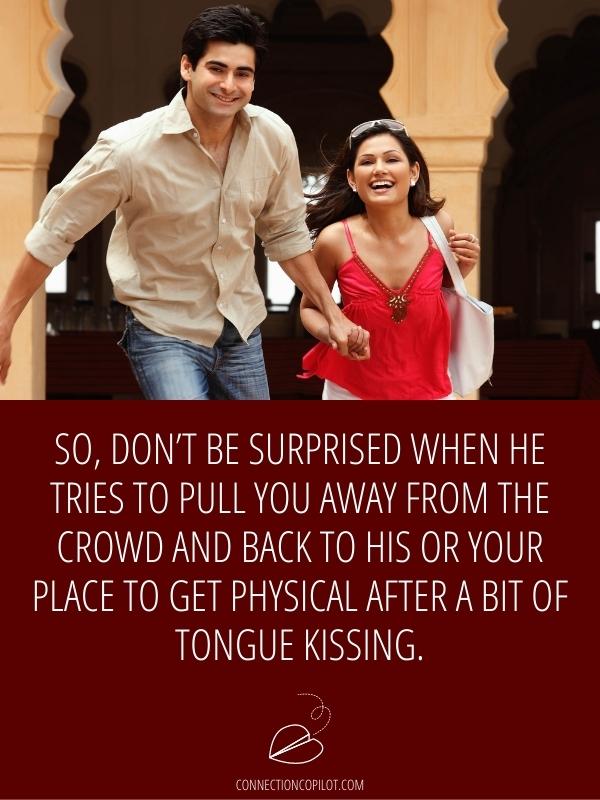 So, don’t be surprised when he tries to pull you away from the crowd and back to his or your place to get physical after a bit of tongue kissing.

4. He Thinks He Doesn’t Know How to Kiss With Tongue

When a guy thinks that he doesn’t know how to tongue kiss, because he obviously lacks the experience, he may hold back from tongue kissing with you(especially if he really likes you).

The last thing he wants is to seem inexperienced or a bad kisser to the girl he’s into the most. If you suspect that’s the case with your guy, don’t be afraid to slip him some tongue and see how he responds.

5. He Doesn’t Want You to Think He’s Sex-Crazy 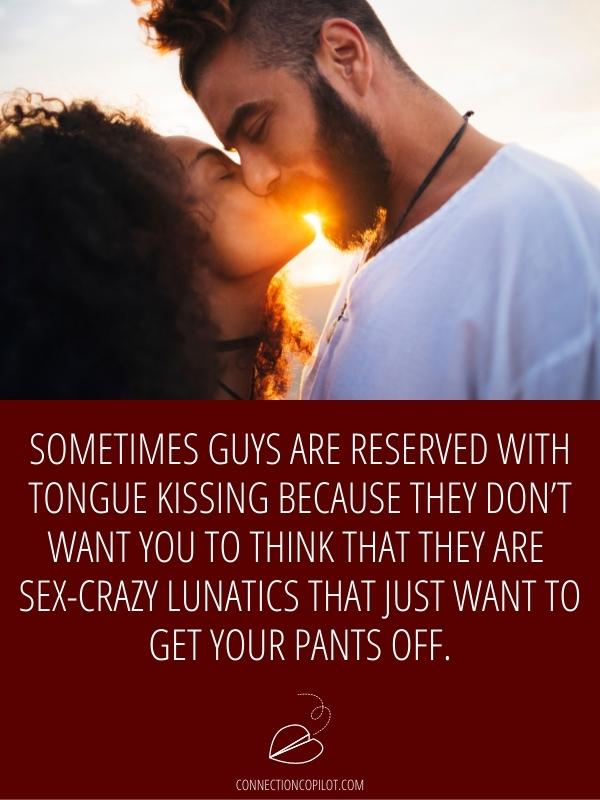 Sometimes guys are reserved with tongue kissing because they don’t want you to think that they are sex-crazy lunatics that just want to get your pants off.

6. He Doesn’t Know Where Your Tongue Has Been

There are also some guys (who are pretty much jerks) that don’t want to kiss with their tongue because they can’t stop thinking about where your tongue has been.

Further, it may bother them that they don’t know where your tongue has been. One thing leads to another and they are feeling extremely uncomfortable. 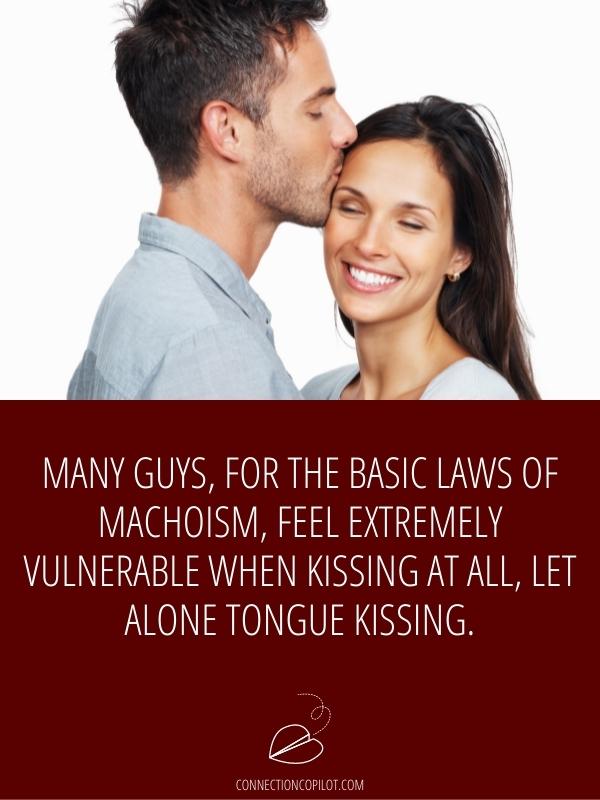 Many guys, for the basic laws of machoism, feel extremely vulnerable when kissing at all, let alone tongue kissing.

If you are in public with one of these match types, you can forget all about tongue kissing even for a second or deal with his scorn afterward(especially if anyone sees you two kissing).

8. He Doesn’t Want to Move to Fast

When guys are afraid things are moving too fast, or are simply trying to set a slow pace to the beginning of a relationship, they may avoid tongue kissing.

They may even outright claim they don’t like it(but it’s probably a bluff). Once things progress and start getting intimate regularly, tongue kissing is rarely an issue anymore.

9. He Isn’t Sure How You Would Respond to Tongue Kissing

Some guys are simply afraid of how you will react if they are the first ones to use their tongue while kissing. 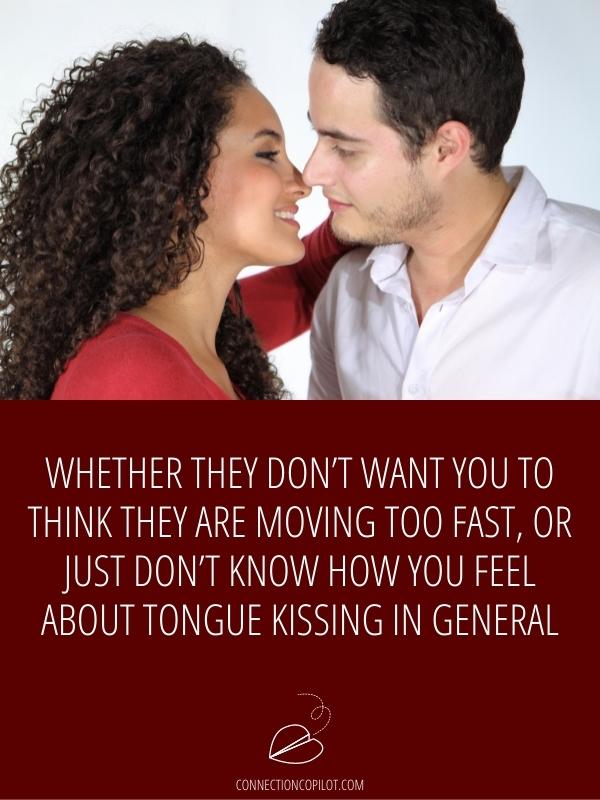 Whether they don’t want you to think they are moving too fast, or just don’t know how you feel about tongue kissing in general, they may hold back until they have a better idea of how you might react to it.

That, ladies, is why you should slip him some tongue if you want some in return!

Last but not least, there are guys who just don’t get into tongue kissing. Why, when, how, where, and whatever the reason for him not liking it, only him and God are likely to know until he gets to know you better.

In these cases, there isn’t much to do but respect his not liking it. Who knows, maybe he’ll come around and start to enjoy it(after you teach him how ;)).

Is it normal to kiss without using tongue?

What does tongue kissing mean to men?

Generally speaking, men view the act of tongue kissing, or French kissing, as a form of “making out”, or even a basic level of sexual exploration of each other’s mouths. Some men like it, and some men don’t(or at least claim as much!). At any rate, it is usually seen as an extremely pleasurable and intimate thing to do(and it is a turn-on to a majority of the men out there). Some men take years of kissing the same person to become comfortable with using their tongue.

Is it normal for guys to not like kissing?