So, he’s cheated on you, and begging to come back… but, you want to know why guys cheat and come back before you decide whether to give him another chance.

We’ve got you covered with 10 reasons why guys cheat and then end up coming back. Read on below!

Why Do Guys Cheat and Come Back? 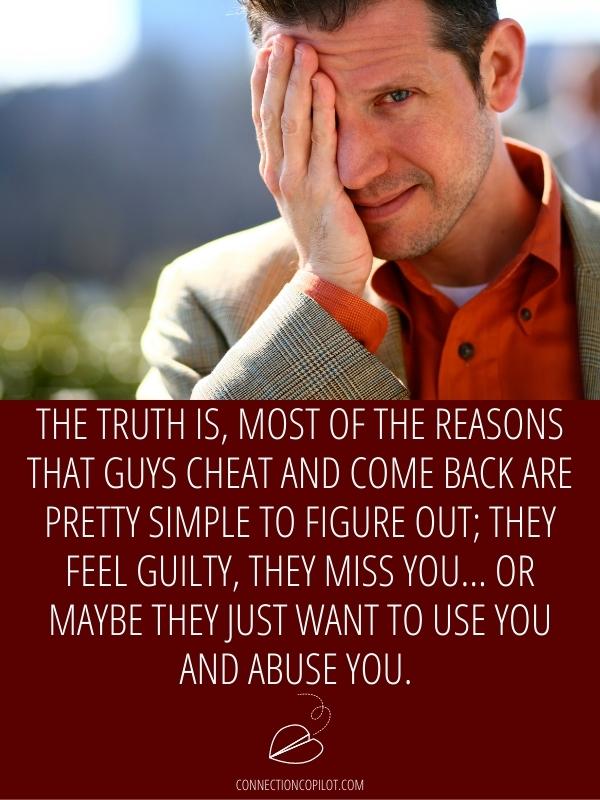 The truth is, most of the reasons that guys cheat and come back are pretty simple to figure out; they feel guilty, they miss you… or maybe they just want to use you and abuse you.

That said, some of their explanations might just surprise you!

Here are 10 of the most common reasons:

1. To Use You as Much as Possible

First and foremost, if it’s not the first time your guy has cheated and come back, it may not be the last.

Also, the more it happens, the more the possibility that he’s just trying to use you as much as possible grows.

2. They Feel Honest Repentance About it

Second on our list is one of the only respectable reasons why guys come back, after cheating… if anything could be considered respectable after he’s already cheated on you, that is. 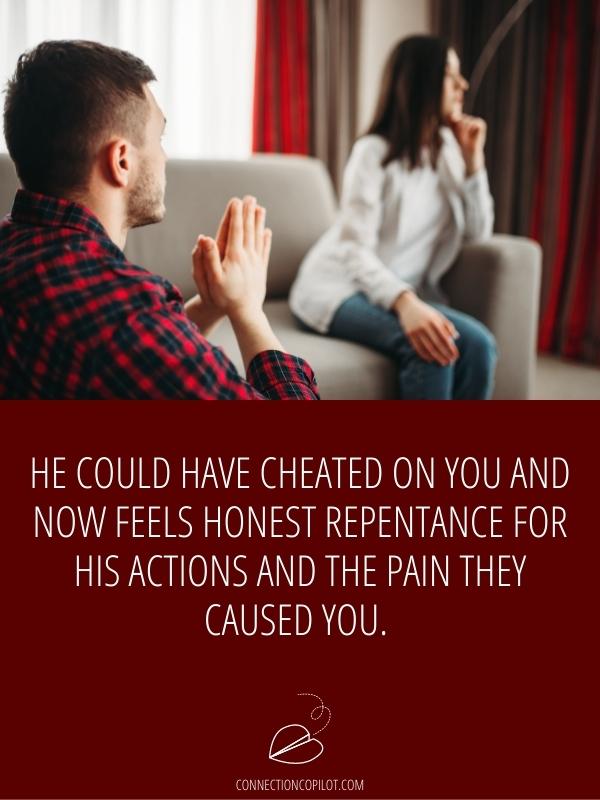 He could have cheated on you and now feels honest repentance for his actions and the pain they caused you.

Sadly, this does not discount the fact that he was cheating on you. And, if you take him back, it isn’t a get-out-of-jail-free card either.

3. Their Guilty Conscience Kicks in After Some Time

One reason you are more likely to experience than his honest repentance is a good old fashion case of a guilty conscience.

When the gravity of what he has done to you sets in, often coupled with the total lack of regard from the person they cheated with, a guilty conscience is one of the top factors that may drive your guy right back into your arms.

4. They Want Their Security Blanket Back 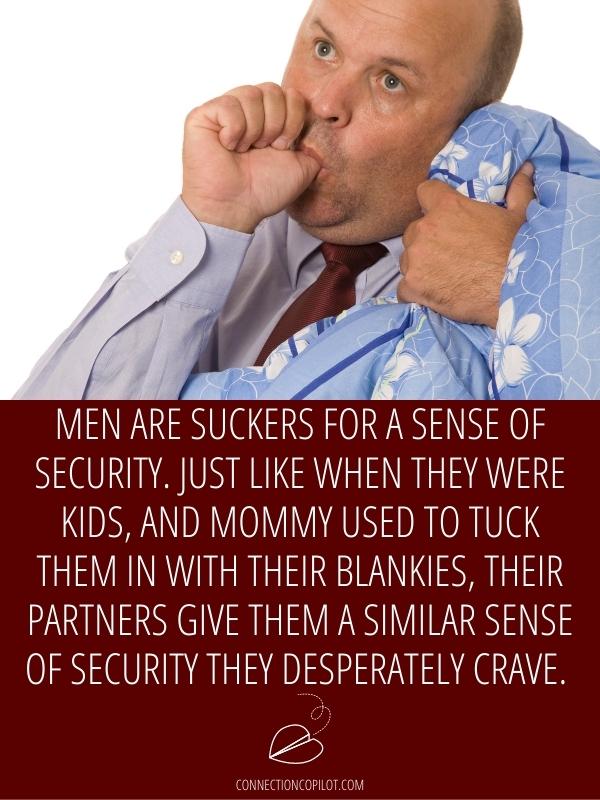 Men are suckers for a sense of security. Just like when they were kids, and mommy used to tuck them in with their blankies, their partners give them a similar sense of security they desperately crave.

If your guy cheats on you and isn’t getting much affection in the meantime, he may be crawling back to you much sooner than later.

5. Too Lazy to Search for Opportunity

In some cases, men overestimate the romantic interest women have in them.

In a scenario where your guy has done just that and saw a potential long-term partner in someone who never wanted anything more than sex, he’ll be back if he’s too lazy to search for new opportunities.

6. You Have Their Trust, and They Want it Back

When a guy cheats on you, and the person they partner up with turns out to be untrustworthy, they tend to come back as quickly as you take them. 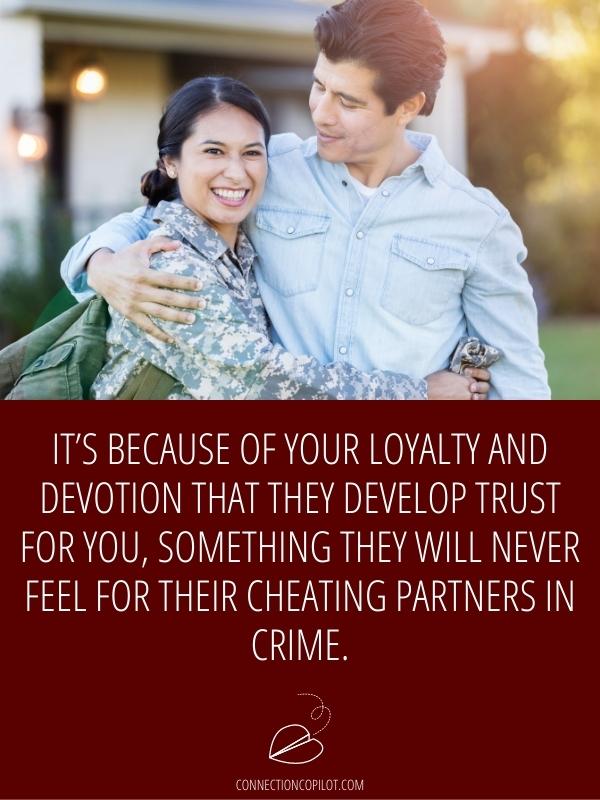 It’s because of your loyalty and devotion that they develop trust for you, something they will never feel for their cheating partners in crime.

If things get rocky between the two new love birds, even for a second, he’ll split and come running for you.

7. The Sex Was Really Good With You, and They Want More

Not every couple has great sexual chemistry, and that’s just how life works. Even if both parties are highly sexual and open-minded, sometimes the spark is just not there.

But, in many cases, couples discover deep sexual pleasures that are only possible between the two of them as a unique couple. Sex with others just isn’t the same.

In these cases, if he cheats on you, he’ll more than likely be back at some point if you allow him because the sex was really good.

8. The Sex With Their New Partner Sucks

Karma has a funny way of paying people back in kind, such as the case with cheating guys from time to time.

For example, after lusting after their co-worker, friend, or whoever they have their eye on, for so long that they’ve built up some crazy fantasy in their head about how great the sex would be… the joke is on them when they do cross the line and cheat on you! 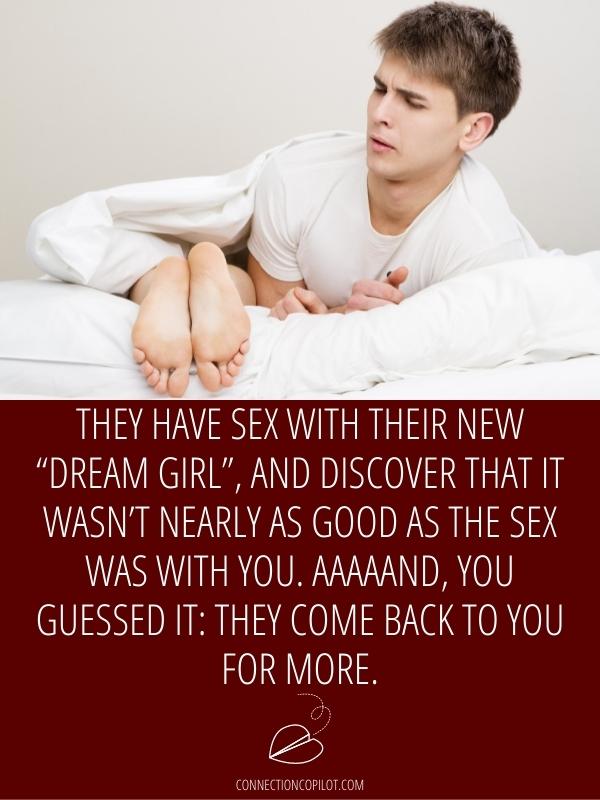 They have sex with their new “dream girl”, and discover that it wasn’t nearly as good as the sex was with you. Aaaaand, you guessed it: they come back to you for more.

9. They Have Lived Out Their Fantasies

Speaking of the crazy fantasies men derive about women before they have sex with them, once they cheat on you and have lived out said fantasies, there is nothing left for them to dream about.

That’s when reality sinks in, they remember where their bread is buttered, and they try everything in their power to come back to you.

10. You Want Them Back and Make Room For Them

The last reason on our list of why guys cheat and come back is another really simple one: they know you want to take them back and you make room for them. 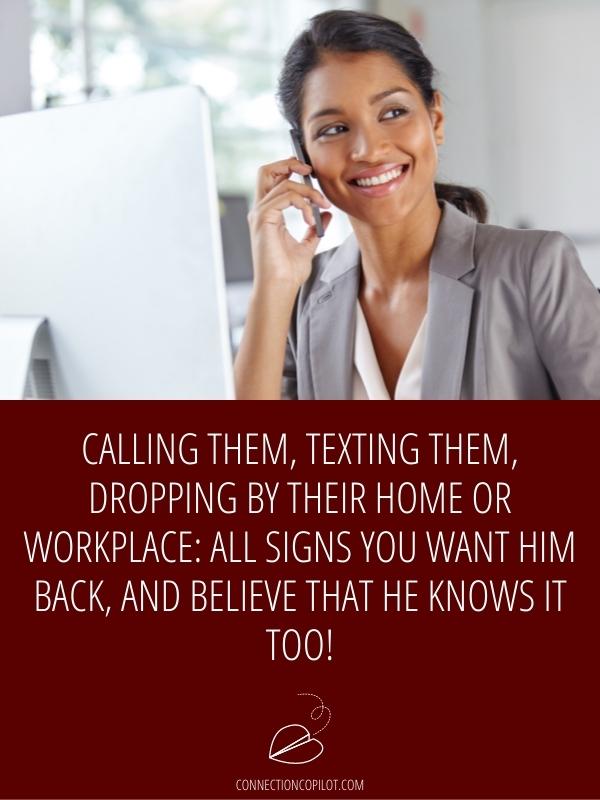 Calling them, texting them, dropping by their home or workplace: all signs you want him back, and believe that he knows it too!

If you are showing him you still care, whether you forgive him or not, he’ll come back. That said, he might just cheat on you again as well.

Why Do Guys Cheat Even If They Love You?

There is no one size fits all answer for this question, rather there are a plethora of individual reasons why guys may cheat even if they are in love with you. From being bored to feeling unimportant and vulnerable, guys cheat for many of the same reasons as women do. Some men even claim they cheat because of the caveman-like/animalistic nature of their very being/DNA.

How Often Do Cheating Guys Come Back?

Do Guys Regret It When They Cheat?

Guys are humans, just like women; of course, they regret it when they cheat, if they are halfway decent human beings. That said, there are a lot of people out there who are too self-centered to regret anything that they do for themselves, regardless of who it hurts.