There are all sorts of reasons why guys act hot and cold, and just as many ways to respond to it as well. Read on below and discover 15 of the most common reasons for this sort of behavior from guys and what you can do about it!

Why Do Guys Act Hot and Cold?

So, everything was going fine between you and your guy, and then seemingly out of the blue, he starts acting hot and cold. Unfortunately, it’s a tale told on a daily basis… because guys are known to act this way for numerous reasons.

Here are just some of the most significant reasons your guy could be acting hot and cold:

1. He’s Not Ready for or is Confused About Commitment

If he isn’t ready for a full commitment and believes you are, he may throw you hot and cold signals. Meanwhile, he’ll be attempting to get his perspective in order.

Likewise, if he’s not against commitment, but simply confused about it, he may seem hot and cold. Until he figures out how he really feels, you can expect the behavior to continue. 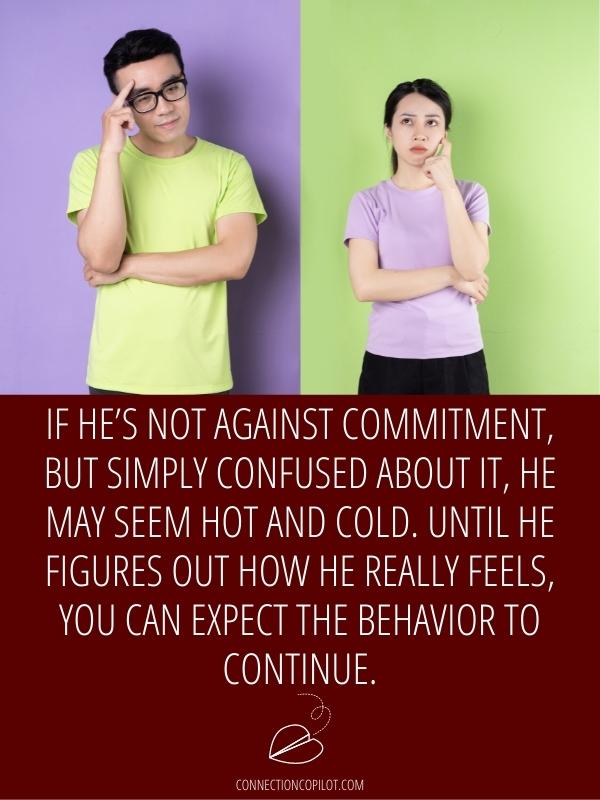 The bad part is that he may not even be aware that he’s acting differently at all.

2. He Doesn’t Feel Comfortable being Affectionate in Public

A lot of guys are simply macho at heart. Others at least want or need their buddies to believe that they are tough.

So, it should come as no surprise that many guys aren’t exactly comfortable with displays of affection out in public.

If you’re trying to hold his hand or lean in for a kiss, or anything similar, and he begins behaving oddly… there’s your sign.

3. He Has Secrets He Doesn’t Want to Open Up About 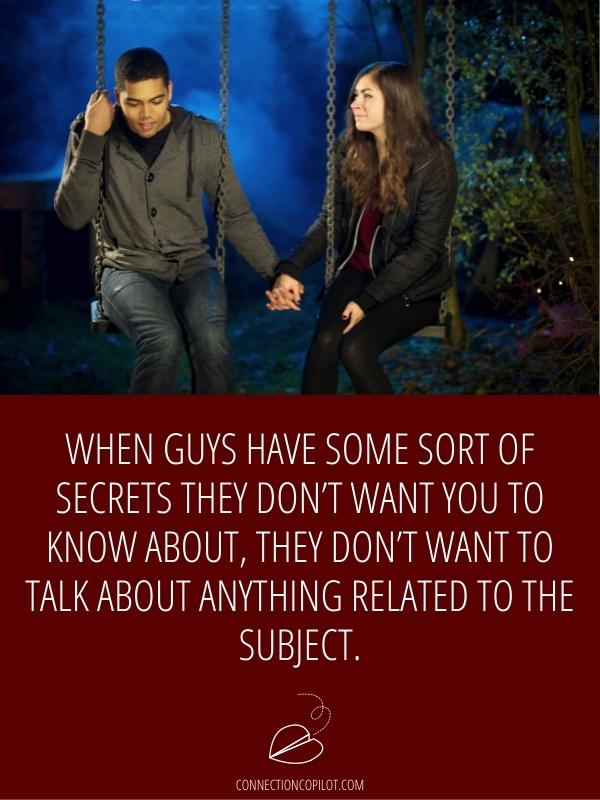 That means whenever you bring about anything remotely touching on the area, he may pull out the fire and ice routine with you.

A lot of the time, once you drop the topic and move on, he’ll warm right back up.

4. He’s Upset About Something But Doesn’t Want to Admit it

Again, guys are a bit macho, to say the least. So, when he’s upset about something, he may not want to admit it.

In these cases, some guys will be hot one minute and cold the next for hours, days, or even weeks.

Until the issue is resolved, don’t expect any change in his on-and-off and then on-again feelings towards you.

5. When He Gets What He Wants, He Changes Back Into the Real Him 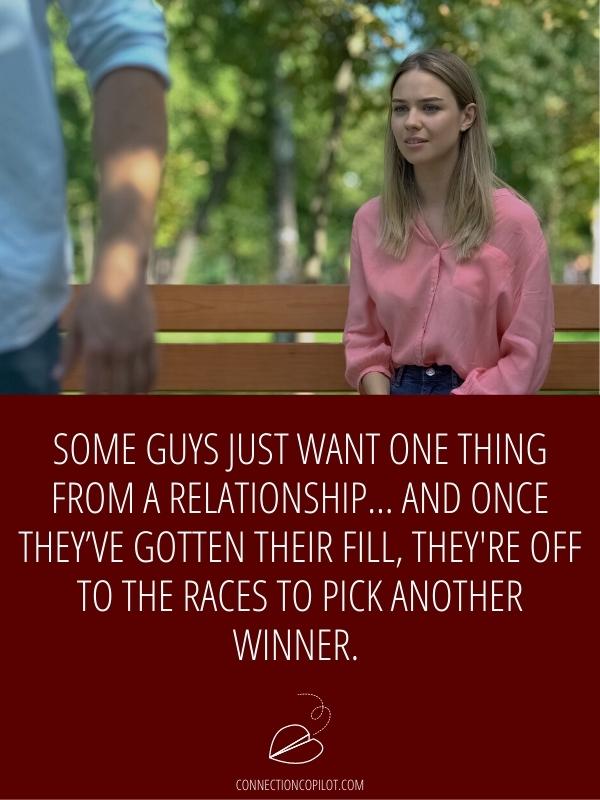 Some guys just want one thing from a relationship… and once they’ve gotten their fill, they’re off to the races to pick another winner.

In other words, once he gets what he wants, he may change right back into the real him. Into the version of him, you may not even know existed.

6. When Things Don’t Go His Way, He Shows His Fangs

If a guy is used to getting his way all the time, well when things don’t go his way he may become pretty agitated.

That’s when the fangs come out and he goes all hot and cold on you.

However, once his ego is appeased, or enough time passes that he forgets why he’s upset, he’ll turn right back into a bowl of sugar.

7. There is Little to No Sexual Attraction Towards You

When there is very little to no sexual attraction towards you, but he is still in love with you, the hot and cold behavior may be observed.

He may not even intend to behave in such a manner or be aware that he is doing so.

That said, successful and meaningful relationships need to be built on more than sex. If he knows as much, and really cares for you, he’ll stick around but may remain hot and cold. 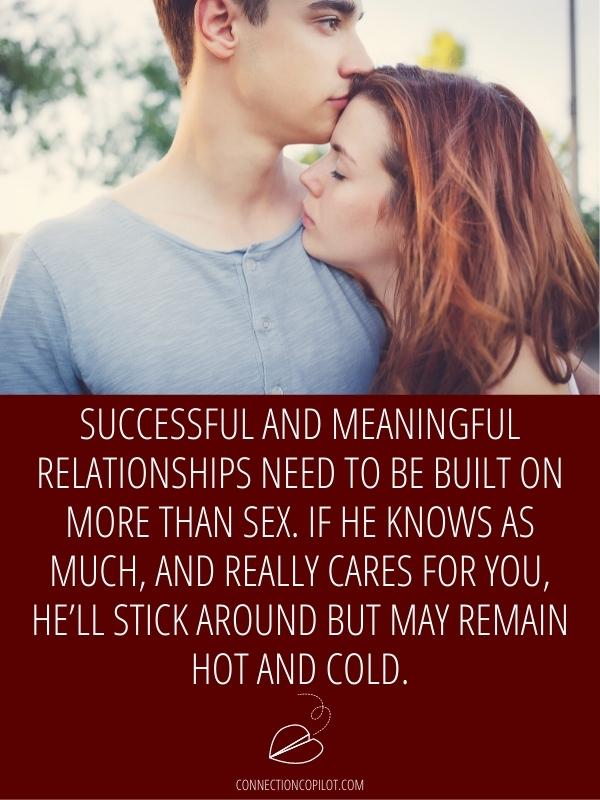 A lot of the time, when guys aren’t too experienced with women, they may attempt to come off as someone they aren’t.

When a guy is playing at something he’s not, his actions may be seen and confused for him actually being hot and cold towards you.

If he’s really good at playing cool kid, and actually impressing you with his devil-may-care attitude, it’s easy to fall for the trap.

9. He’s Attempting Reverse Psychology on You 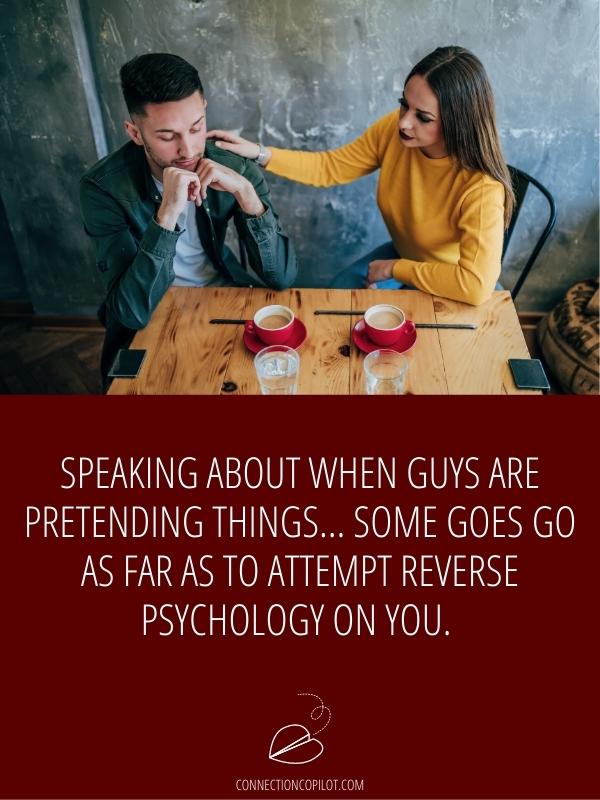 Speaking about when guys are pretending things… some goes go as far as to attempt reverse psychology on you.

Why would they go to such lengths? Simple: the more they seem like they don’t care, the more that you want them to care.

At least, that’s what they’re telling themselves as they pretend to be hot and cold with you.

It’s an old cliche, it’s not you, it’s him. But, sometimes it really IS him and not you.

The universe spares no one from the chaos that is life on earth, and sometimes guys have stuff going on.

In these cases, guys aren’t actually being hot and cold. It just seems like they are if you don’t understand how much they have on their plate.

11. He is Going to Move On and Wants to Upset You 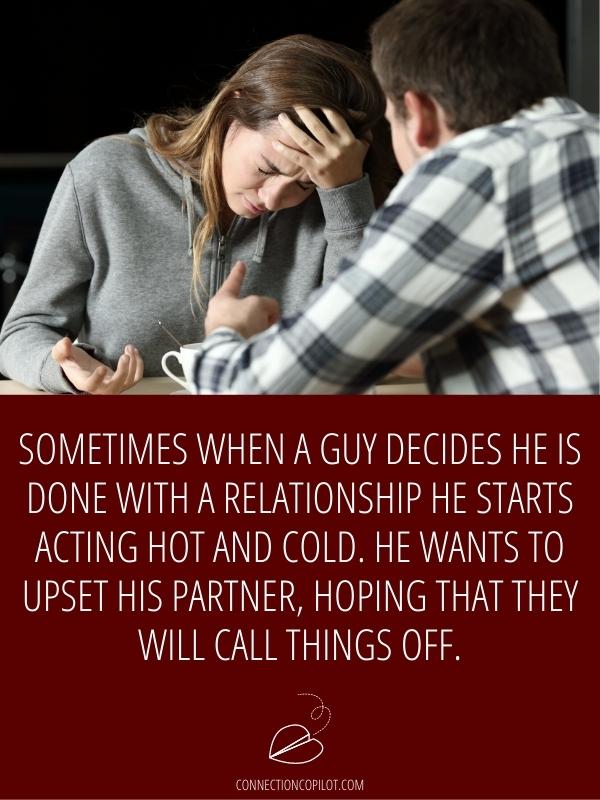 Sometimes when a guy decides he is done with a relationship he starts acting hot and cold. He wants to upset his partner, hoping that they will call things off.

At best, these are attempts to come out of the relationship making you feel like the bad guy.

Unfortunately, the best thing you can do is recognize what’s happening, call him on it, and move on yourself.

12. He’s Trying to Slow Things Down Between You

When he’s really into you but is either still trying to figure things out, or has things going on in his life, he can seem hot and cold.

The truth is, he just wants to continue developing the relationship at a slower pace.

The good thing is that he’s not really hot and cold as much as he is attempting to transition into a new phase of the relationship.

13. He Realizes That He’s Losing Interest in You 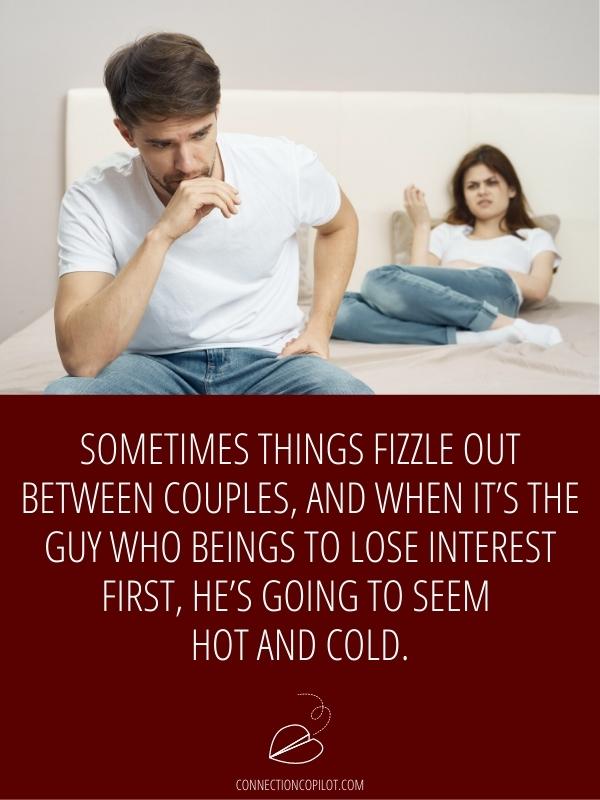 Sometimes things fizzle out between couples, and when it’s the guy who beings to lose interest first, he’s going to seem hot and cold.

His on-and-off signals may be to subconsciously let you know that something has changed between the two of you.

If a guy becomes more romantically interested in someone else than he is with you, expect hot and cold signals.

Likewise, if he is still interested in you, but is also genuinely interested in another person simultaneously, he may come off as hot and cold.

15. It’s Actually YOU That is Hot and Cold

There is always the possibility that your guys aren’t actually being hot and cold at all. 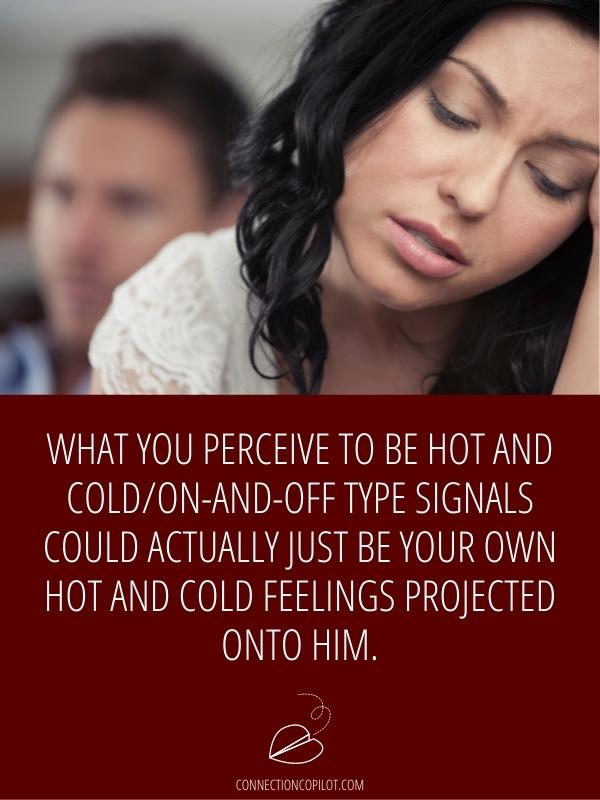 What you perceive to be hot and cold/on-and-off type signals could actually just be your own hot and cold feelings projected onto him.

It’s not the prettiest of possibilities, but it is just as much a reality as the other fourteen reasons on this list.

How to Respond When a Guy Acts Hot and Cold

Now that you’re more familiar with the reasons guys act hot and cold, it’s time to have a look at how you can respond.

When guys act hot and cold:

What is a hot and cold relationship?

A hot and cold relationship is one that goes back and for from sunshine and rose to storm clouds and downpours. The hot phase includes attraction, attention, and intimacy. The cold phase includes pulling away, distance, frustration, and rejection.

Why does a man suddenly go silent?

Men may suddenly go silent for a plethora of reasons. Some of the most typical reasons for sudden silence from men are that they are upset, scared, angry, sad, or even happy. Some men will also become silent suddenly when they experience a stressful or confusing situation.

How do you know if a guy is playing you?

There is no definite way to know when/if a guy is playing you, unfortunately. However, there are many tell-tale signs you can look for, including lack of attention, fewer calls, and texts, coming home late, showing up to dates late, or having too many rules/excuses about how often/when you can see each other.