Whether you’ve been double texting a guy you just met or thinking about doing so, you may be feeling a bit of anxiety. Oh, honey. Take a deep breath, make a tasty beverage, and sit down. Let’s work through this together, okay?

Is it Okay to Double Text a Guy You Just Met? 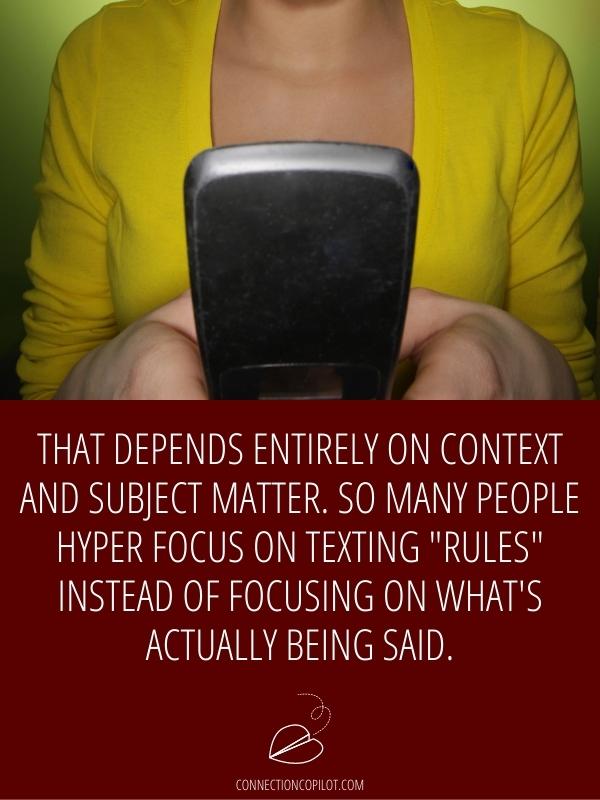 That depends entirely on context and subject matter. So many people hyper-focus on texting “rules” instead of focusing on what’s being said.

Let’s say you texted something, but your phone autocorrected a word to something else. Double texting usually implies that a stretch of time has passed between messages. If you didn’t notice that you messed up a message until hours later, then it’s okay to send another one to clarify.

For example, if he asks what you’re up to and you respond with an answer and a clarifying follow-up:

That’s okay. In this situation, you’ve made an error and have taken a step to correct the information given, even though it’s been a while since the last text. You’re expanding upon the first one for a reason, not trying to grab his attention.

Well, that depends entirely on what you’re texting. If you are double texting something cute or clarifying something important, then no. In contrast, if you double (or triple, or quadruple…) texting specifically because he hasn’t responded and you’re trying to get his attention, then yes.

Here’s an example of a double text that’s considered acceptable pretty much across the board:

This kind of behavior shows that you’re reaching out and thinking of him in a positive light.

Keep in mind that everyone you meet has a lot going on in their own lives. As such, keep double texting to a minimum whenever possible. 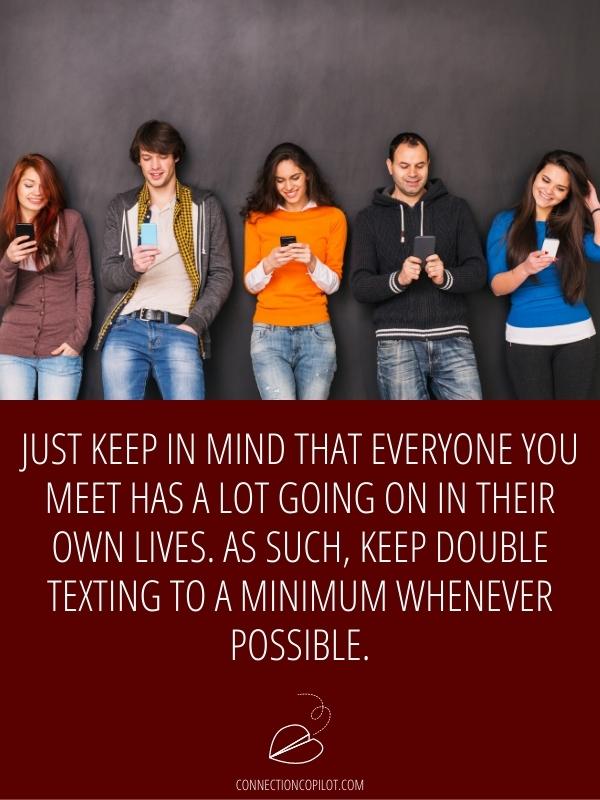 As mentioned, a lot of texting rules depend on context. The following rules are general guidelines, but adapt them to suit your circumstances.

Rule 1: Unless You’re Correcting a Mistake, Wait for a Response

If you’re not correcting a mistake within a short period or adding information that you forgot to mention, wait for him to respond. For example, you can double text if you’re giving him directions, adding to a list, or keeping him apprised of a situation.

Rule 2: Try Not to Send Texts Longer than His

If he’s texting you single sentences, don’t reply with novels. This doesn’t mean you have to count the number of words he sends and match them—it goes by a rough estimate.

Rule 3: Don’t Send Follow-Up Texts Asking Where He Is

Seriously, unless you two have been in a committed relationship for well over a year and/or are living together, married, etc., don’t ask him why he hasn’t responded yet. It’s one thing to worry about where your spouse is when they’re a couple of hours late for dinner, and another thing entirely when you text your new boyfriend a dozen times demanding to know why he hasn’t answered you back.

Rule 4: Wait for Him to Respond Before Sending Another Text 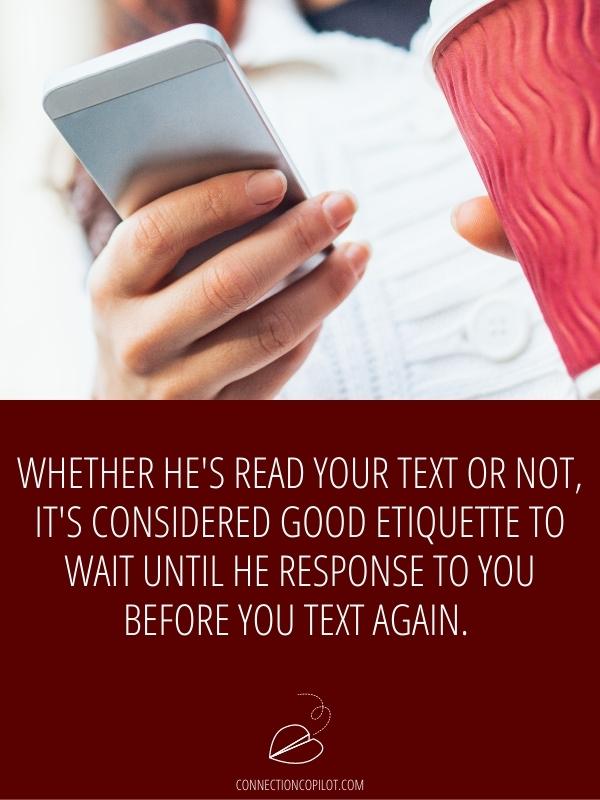 Whether he’s read your text or not, it’s considered good etiquette to wait until he responds to you before you text again. This is a courtesy rather like waiting for the other person to reply to what you’ve said before you continue talking.

He could be otherwise occupied with a ton of other things or just doesn’t feel like communicating at the moment. Show him that you respect him (and his personal space) by giving him the breathing room to respond to you on his terms.

What Does it Mean if a Guy Double Texts You?

Once again, we have to look at the context. 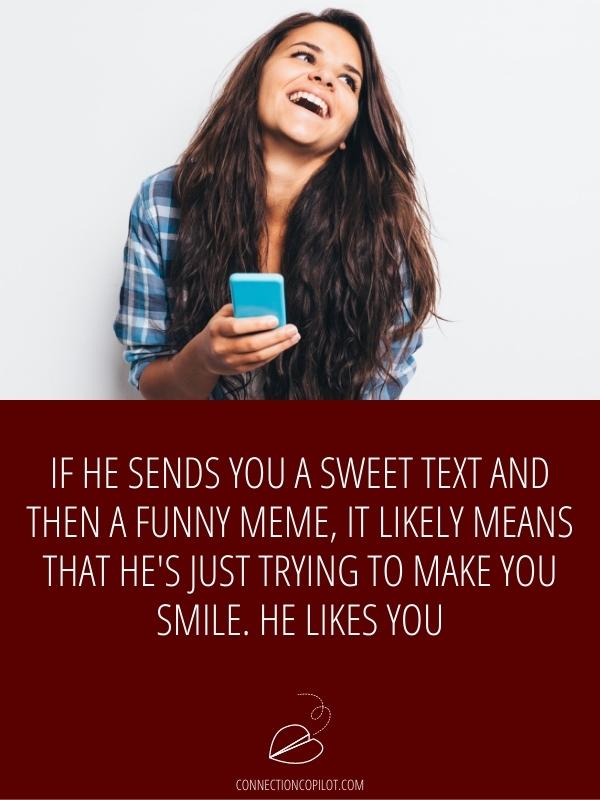 If your guy is sending you follow-up information to a previous text to expand upon it, then that’s cool. It just means that he’s giving you additional info. Similarly, if he sends you a sweet text and then a funny meme, it likely means that he’s just trying to make you smile. He likes you, so he’s doing something cute to brighten your day.

In contrast, that’s a big red flag if he’s double texting to demand why you haven’t answered him. That implies that he expects you to be at his beck and call when he wants, regardless of what else you might be doing at the time.

Additionally, it shows insecurity and neediness on his part. A guy who’s confident in himself isn’t going to freak out and start grasping at you if you don’t text back for an hour or two because you’re soaking in the bath. An even bigger red flag is if he gets aggressive or insulting if you don’t respond quickly enough.

Take a good look at the entire situation in context, and then determine how you feel about the exchange. Your gut instinct will go a long way in terms of inferring his meaning.

As mentioned before, it’s considered double texting if a fair bit of time has elapsed between texts. Adding info to a previous text like this is okay:

That’s fine, as long as you don’t send anything else unless he asks.

If something serious happened and the guy asked to be kept in the loop, double-texting is absolutely acceptable. Like this:

In contrast, the following falls under the category of “oh hell no”:

This one implies that you’re both needy and demanding, and you’re not respecting the fact that he doesn’t feel like communicating right now.

Ultimately, when it comes to double texting, a guy you just met, your best bet is temperance. Try not to do it, and only double text if you have to (like we mentioned earlier). This will show him that you care about clarity and eloquence but aren’t demanding his attention.

If you’ve been left on “read” and feel it’s important to reach out again, wait three days before sending anything else. After that, leave the ball in his court. Suppose he texts you back and tells you why he’s been quiet. Similarly, if you don’t hear back from him after a week, that tells you a lot. If he’s into you, he’ll make a point of staying in touch with you.

With double texting, go by the basic rule of asking yourself whether you would want him to do the same thing to you, and run with your answer.

100+ Flirty Texts To Make Him Laugh

What To Do When He Doesn’t Text You Back: 15 Responses

When a Guy Includes Your Name in a Text: 15 Meanings

101 Text Messages to Make Him Obsess Over You

When a Guy Takes Hours to Text Back (15 Reasons Why)

When a Guy Stops Texting You Everyday: 21 Meanings

75+ Texts to Make Him Think About You All Day

75+ Texts to Make Him Miss You (For Long Distance Relationships)

How to Get a Guy to Text You First – 30 Ways That Work Fast!

101 Sweet Goodnight Texts for Him

150 Flirty Texts for Him – Messages That a Guy Will Love

101 Flirty Goodnight Texts for Him

50 Secret Ways to Say I Love you in Text

101 Cute Goodnight Texts for Him

50 I Know You’re Asleep Texts for him

101 Thinking of You Texts for Him

25 You Make Me Happy Texts for Him

25+ Inspirational Good Morning Texts for Him

101 Sweet Good Morning Texts for Him

100 Flirty Good Morning Texts for Him (Send These To Your Crush, Boyfriend or Husband!)

75+ Funny Good Morning Texts for Him

75 Long Good Morning Texts for Him to Copy and Paste

75 Simple Good Morning Texts for Him

25+ Witty Good Morning Texts for Him

25+ Thoughtful Good Morning Texts for Him

25+ One Month Anniversary Texts For Him

How Long Should I Wait to Text Him Back After He Ignored Me? (ANSWERED)

How Long to Wait Before Texting a Guy Back (ANSWERED)

Double Texting a Guy You Just Met – Is It Okay?

Guy Hot and Cold Texting (What It Means)

How Much Texting Is Too Much to a Guy? (Answered)

Guy Uses Exclamation Points in Texts – What Does It Mean?

Should You Text a Guy When He’s on Vacation? (ANSWERED)

How to Not Be Boring When Texting a Guy (10 Tips)

Does Not Texting a Guy Back Make Him Want You More? (ANSWERED)

A Guy Stopped Texting Me Out of Nowhere: 10 Things to Do

35 Texts to Make Him Forgive Me

101 Sexy Text Messages That Will Make Him Crave You

53 Things to Text Him to Make His Day

50 Texts to Make Him Want You Back

15+ Texts to Make Him Feel Bad

45+ Texts to Make Him Laugh at Work

20 Texts to Make Him Ask You Out

15 Texts to Make Him Worry About Losing You

How to Show a Guy You Like Him Over Text

What to Text Your Boyfriend When He’s Mad at You

What to Text When a Guy Pulls Away (Without Seeming Clingy)

What to Text a Guy Who Keeps Blowing You Off

35+ Examples of What to Text a Guy First

What to Text a Guy First Without Seeming Desperate

20+ Examples of What to Text a Guy You Just Met

15+ Things to Text a Guy to Make Him Like You

40+ Dirty Things to Dare a Guy Over Text

What to Text Back When a Guy Calls You Beautiful

What to Text a Guy You Can’t Stop Thinking About

What to Text a Guy When Conversation Gets Boring

This is What to Text a Guy After Making Out