Calling someone cute is generally a compliment, however, that is not always the case. Further, some people may take the word “cute” as patronizing, or as the same as calling them a sissy.

Read on below and get to the bottom of how guys feel about being called cute!

Most people take being called cute as a compliment, but a lot of guys really don’t like it at all. In the following section, we discuss 11 of the main reasons they don’t like it!

1. It Makes them Feel Feminine 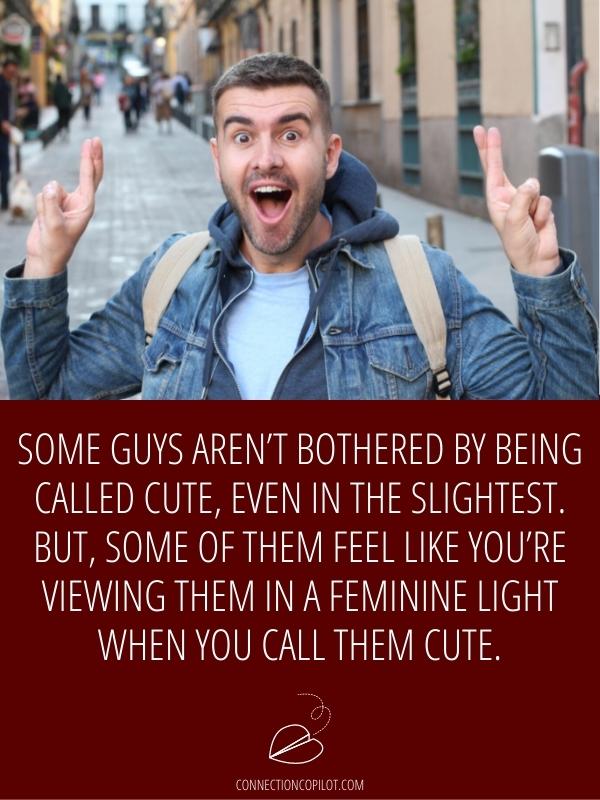 Some guys aren’t bothered by being called cute, even in the slightest. But, some of them feel like you’re viewing them in a feminine light when you call them cute. The word cute is more often associated with girls, especially the young and adorable ones… which is the last thing a guy wants his love interest comparing him to.

2. They Think They Are Friendzoned

When a guy is called cute one too many times, he may believe that you’ve friend-zoned him. After all, girls don’t call Johnny Depp and Brad Pitt types cute, right? They call them hunks, sexy, or man-babes. So, if you are constantly calling him cute, he’s likely to start acting hot and cold or confused around you until he figures things out.

3. It Makes Them Feel Silly 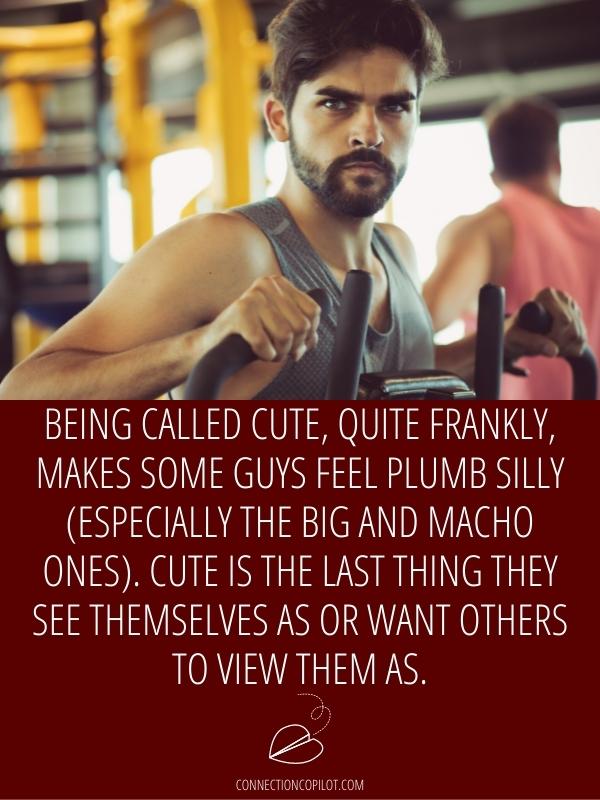 Being called cute, quite frankly, makes some guys feel plumb silly (especially the big and macho ones). Cute is the last thing they see themselves as or want others to view them as. If your guy drives a big truck, talks with an extra deep voice, and walks like he’s carrying a 10-pound summer sausage in his pants everywhere he goes, it’s probably best to avoid the cute-calling.

4. It Makes Them Feel Small

Similar to how being called cute makes certain types of men feel silly, it makes the same type of men, and others, feel small. Cute describes a little girl. Cute describes a puppy dog. In the guy’s mind, cute equates to small. And, again, the last thing a guy wants is for a woman to think that ANYTHING about him is small. Especially the 10-pound sausage he’s packing.

5. They Aren’t Sure If You’re Serious 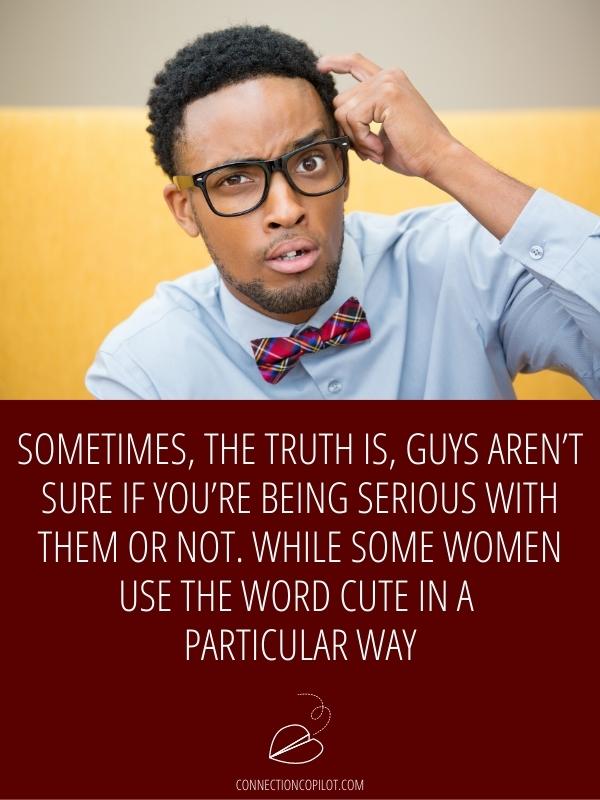 Sometimes, the truth is, guys aren’t sure if you’re being serious with them or not. While some women use the word cute in a particular way, others use it in a patronizing sort of way (to make fun, rather than a compliment). If they’re confused about it, the more you use the term, the more likely it is that they’ll start acting weird.

The bottom line? For many guys, it’s plain and simple: cute isn’t sexy. That’s all there is to it. A guy wants his potential love interest to find him unbelievably sexy (someone they’d ravish every night), not adorably cute and cuddly (just someone they’d like to walk them to class). If you don’t believe us… try replacing “cute” with “stud” or “handsome” and see how he reacts, next time!

7. They Think You Think They’re Ugly

If the cute card is played too many times, guys start to get a complex about it (come one, so would anyone!). They start to wonder if what you really mean is that they are unattractive. If they were at least attractive, you might use the word handsome, or good-looking… but, cute? Cute is for sissies!… not for big, strong, princess-rescuing, butt-kicking skull-cracking, bad boys!

8. They Don’t Feel Attracted to You

One reason a lot of us never see coming is that the guy in question doesn’t actually have romantic feelings towards you. When there is no physical interest in you, being called cute, or targeted in any sort of similar way, is enough to make some guys feel awkward and uncomfortable. 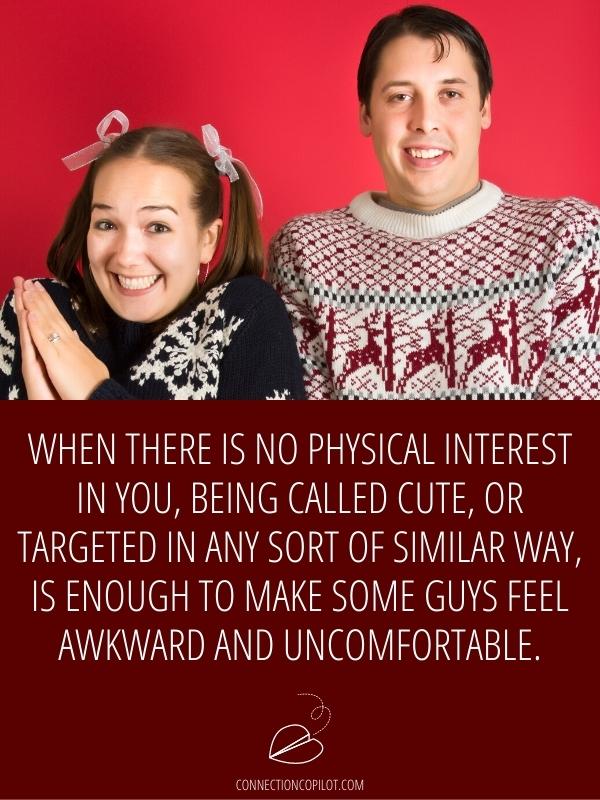 When he wants to be your hero, and you drop the C-word on him, things are bound to get wonky for a minute. In his mind, he is slaying dragons and warding off highwaymen, all for your safety and affection… and then he is crashing back down to reality, by your calling him cute. Guys want to be the hero, not the sidekick. 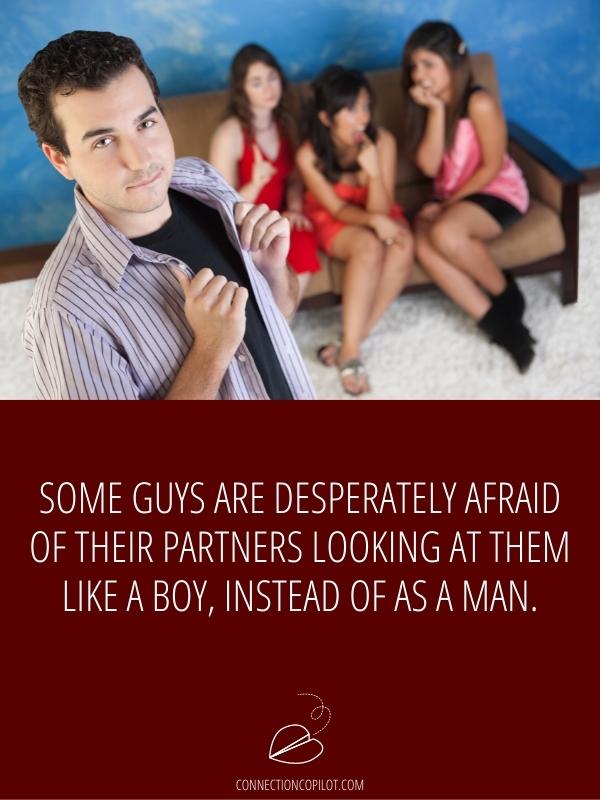 Some guys are desperately afraid of their partners looking at them like a boy, instead of as a man. When he feels like you see him as nothing more than a boy because you are always calling him cute, and avoiding words like “big” “strong” “irresistible” “sexy” and “man-beast” he’s bound to get upset eventually.

Same bottom-line, different package: your guy wants you to see him as a wolf, not as a puppy. Again, cute is what our moms and little sisters think puppies are (because they are). Calling a man cute, in his mind, is as good as telling him he’s adorable, or like a helpless little puppy. Being a puppy is the last thing a guy wants you to think of him as. 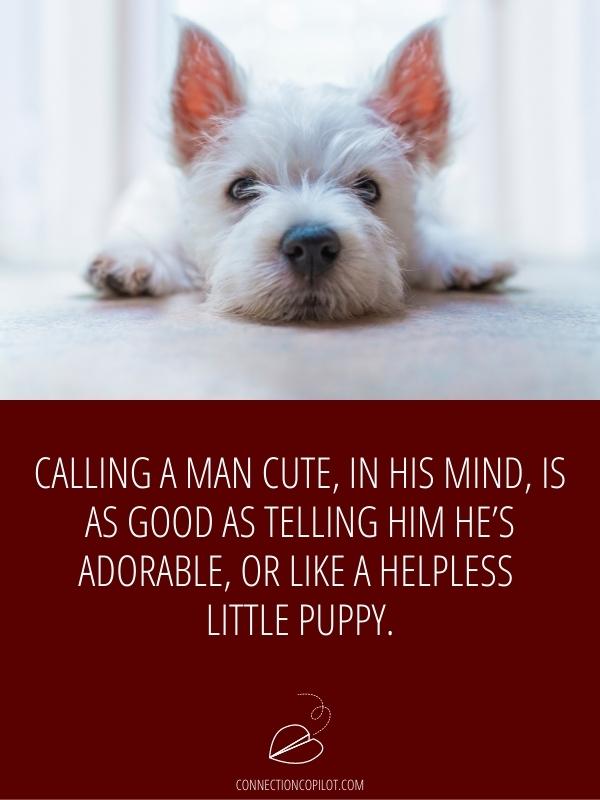 Is being called cute a compliment?

Being called cute is more of a compliment for women than it is for guys. Many guys actually interpret being called cute as belittling, insulting, dismissive, and in other unflattering lights. Cute is a little too emotional for guys, in general, to be comfortable with it.

What does cute mean to a guy?

When a guy calls you cute, it’s hard telling whether he is dismissing you as just a friend, or he’s telling you that he thinks you are adorable. On the other hand, when you call a guy cute, he is likely to take it as you friend-zoning him or you politely letting him know you don’t see him as a sexy man-stud.

Guys vary in what they like to be called, but once you get to know them a little bit it’s not so hard to figure out. A lot of dudes like to be called baby, or babe. They also prefer stuff like “honey” or “sugar” over words like “cute”. Daddy is another one the guys prefer.