So you’re seeing this really nice guy and then all of a sudden, boom, he transforms into Mr. meany-pants.

You are not alone: it isn’t uncommon at all for guys to go from nice to mean.

Read on below and explore these 11 reasons guys act nice, then mean, and what you can do about it!

Why Do Guys Act Nice Then Mean?

1. He’s Attracted to You 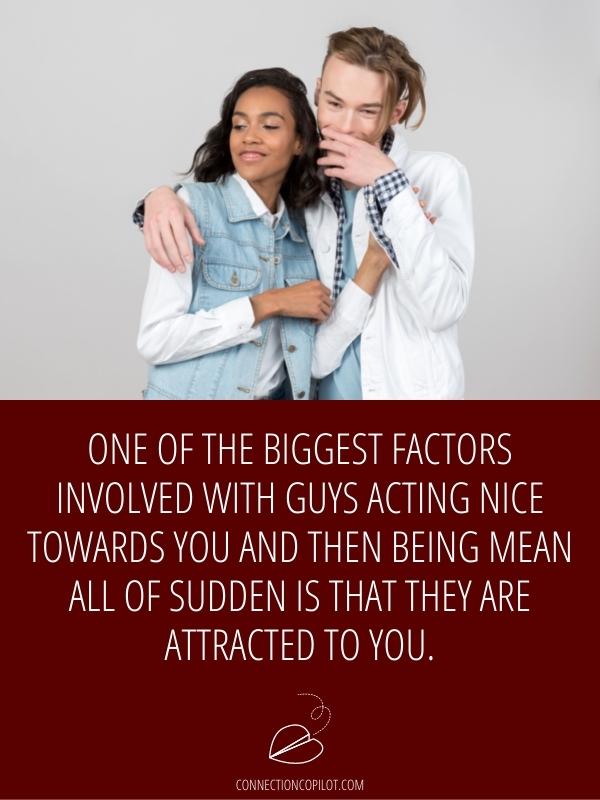 One of the biggest factors involved with guys acting nice towards you and then being mean all of sudden is that they are attracted to you. Now, that doesn’t mean every rude guy on the planet secretly has a thing for you… but there is a good possibility that if your guy is normally nice and has turned mean recently, it could be that he’s hardcore crushing on you.

2. He Wants You to Be Attracted to Him

Sometimes guys get mean because they want you to display the same sort of attraction for them that they do for you. Whether he’s been crushing on you for years, or just met you five minutes ago, if he wants you to be as attracted to him as he is towards you, there’s a good possibility that he’ll go from nice to mean, and hot to cold, and at least a few times.

3. He Wants to Gain Control Over You

Guys that are used to getting their way, and generally always being in control, can get awfully mean real quick when they feel like they don’t have a tight enough grip on you. So, if your Mr. nice guy starts showing his fangs when you make your own decisions, even little seemingly innocent ones, beware: he may want to gain control over you. 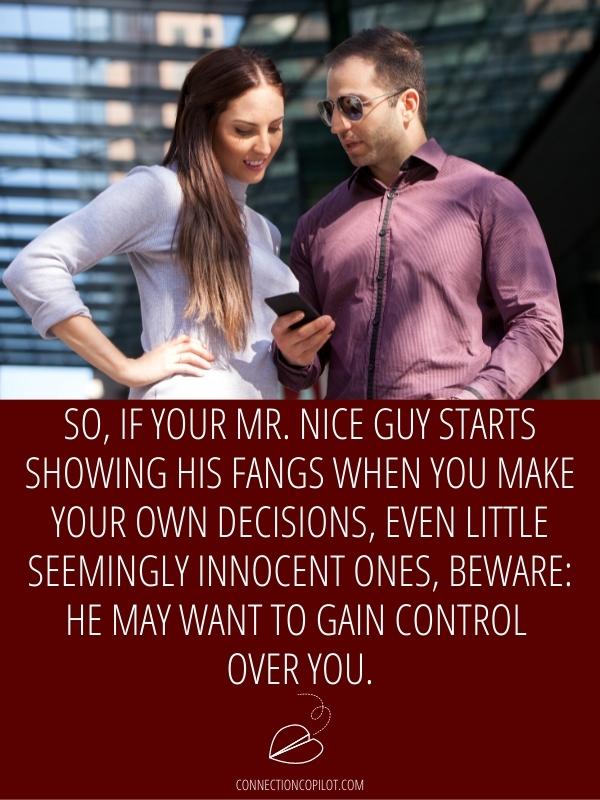 4. He’s Jealous of Others

When a guy is jealous of other people being around you, especially other guys, he can go from nice to mean in zero-to-sixty. The more that he likes you, and jealous he is towards others who get your attention, the meaner his angry outbursts might be.

5. He’s Not Ready for a Real Relationship

Not all guys that are into you are into the idea of a long-term “real” relationship. If a guy really likes you, but doesn’t like the idea of a real relationship with you but thinks you are fond of the idea, he could change from nice to mean. 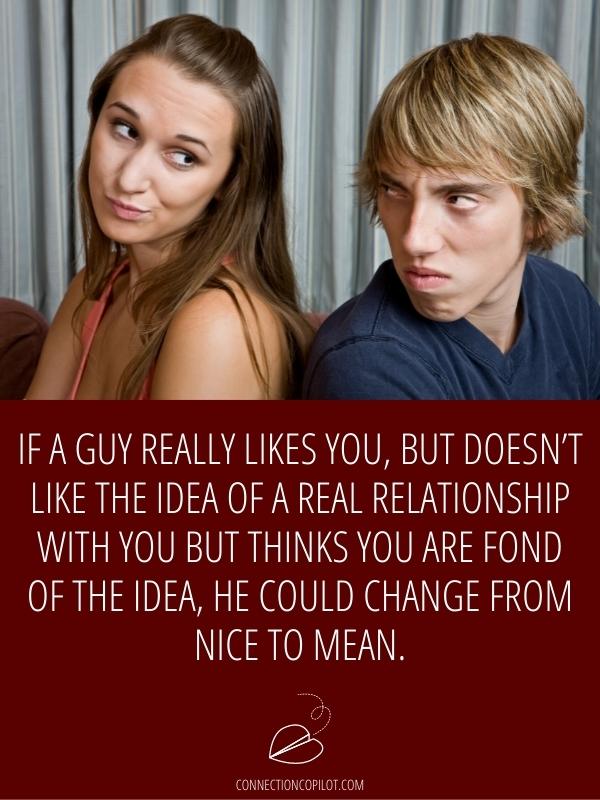 Some guys just want to play games with your head, period. There’s not much you can do about it other than realizing it for what it is and walking away. Until then, be prepared for another round of mind games at any given time.

7. He Doesn’t Know What to Think/Do

When he doesn’t know what to think or do, be it in general, or at a specific moment(for example, during a date, or somewhere in front of friends), he could snap and say or do something mean and out of character. That said, the very next moment he may return to acting nice and sweet and normal as if nothing ever happened.

8. He’s Scared of Being Hurt 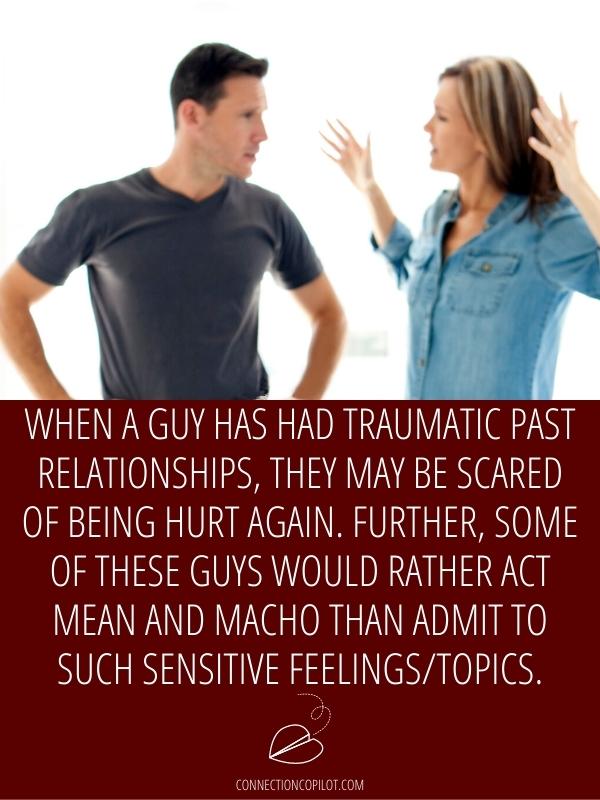 When a guy has had traumatic past relationships, they may be scared of being hurt again. Further, some of these guys would rather act mean and macho than admit to such sensitive feelings/topics. The good thing is that once he sees you’re not going to abandon or hurt him otherwise, he’ll get back to being his normal self.

9. He’s Intimidated By You 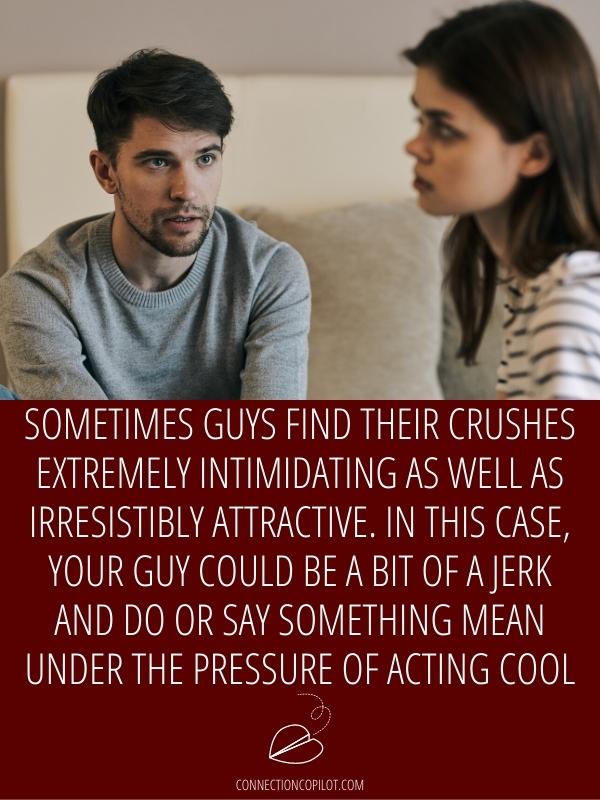 Sometimes guys find their crushes extremely intimidating as well as irresistibly attractive. In this case, your guy could be a bit of a jerk and do or say something mean under the pressure of acting cool and unafraid of you and your opinion of him. The further the relationship develops, the less likely he’ll remain intimidated by you.

10. He’s Lost Romantic Interest in You

One of the main reasons guys go from being nice to acting mean all the time is that they’ve lost romantic interest in you, whether the spark just wasn’t there or it fizzled out over time. The sad part is that many of these guys keep you around, and act mean towards you until they have another relationship all lined up and ready to go. 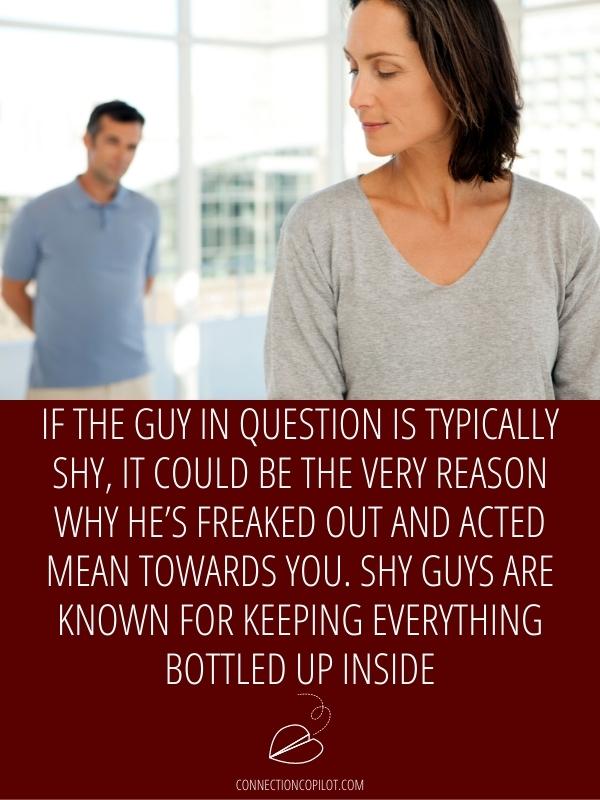 If the guy in question is typically shy, it could be the very reason why he’s freaked out and acted mean towards you. Shy guys are known for keeping everything bottled up inside and generally being nice towards everyone around them. But, when something seriously upsets them… lookout, here comes Mr. Meany-pants!

How to Handle a Guy That’s Nice Then Mean

Now that you know some of the exact reasons why guys act nice then mean, here are a few common-sense pointers for how to handle them:

What is it called when someone is nice and then mean?

Do guys flirt by being mean?

It’s a pretty common-place thing for guys who have a crush on someone to flirt with said crush by being “mean”. That said, by mean, we don’t mean beating them up and stealing their purse after a date. Teasing, to the point of slight meanness, is definitely a sign of flirting. This sort of meanness is actually meant to be more playful than anything else.

How do you know if a guy is pretending to not like you?

There are tons of ways to know if a guy is pretending to not like you, or if he really doesn’t like you like that. A few of the main indicators that he actually does like you are he teases you all the time, always makes time for you, is protective of you but isn’t quick to admit it, gets jealous of other guys, and is always smiling at you.