Sometimes guys are the sweetest… other times not so much.

One day he’s buying you roses and chocolate… the next, he’s dodging your questions.

Read on below and discover what it actually means when a guy doesn’t answer your question.

What Does It Mean When a Guy Doesn’t Answer Your Question?

Unfortunately, guys seem to have earned themselves quite the reputation for being dodgers (and we’re not talking about sports).

Why is it that guys don’t answer questions sometimes, while other times they seem to be open books?

1. He Is Hiding Something From You 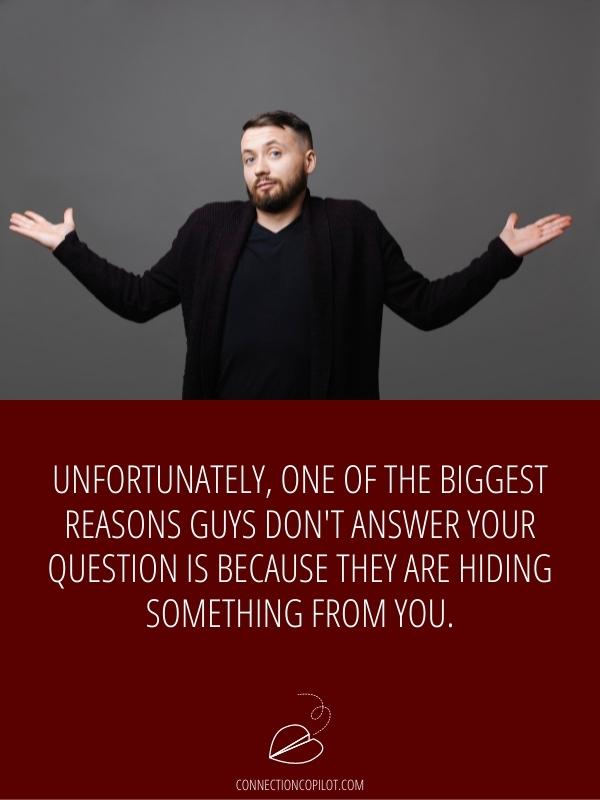 Unfortunately, one of the biggest reasons guys don’t answer your question is because they are hiding something from you.

Whether they are seeing someone else, or they just bought tickets for a Caribbean cruise, keeping a secret is one of the main meanings behind a guy not answering your question.

2. He Doesn’t Have Enough Real Insight To Answer

Sometimes guys don’t answer your question because they just really don’t know how to answer.

When a man doesn’t have enough real insight to answer your question, he’s likely to ignore it rather than explain to you how stupid he feels.

3. He’s Not In a Relationship With You (and Doesn’t Have to Answer) 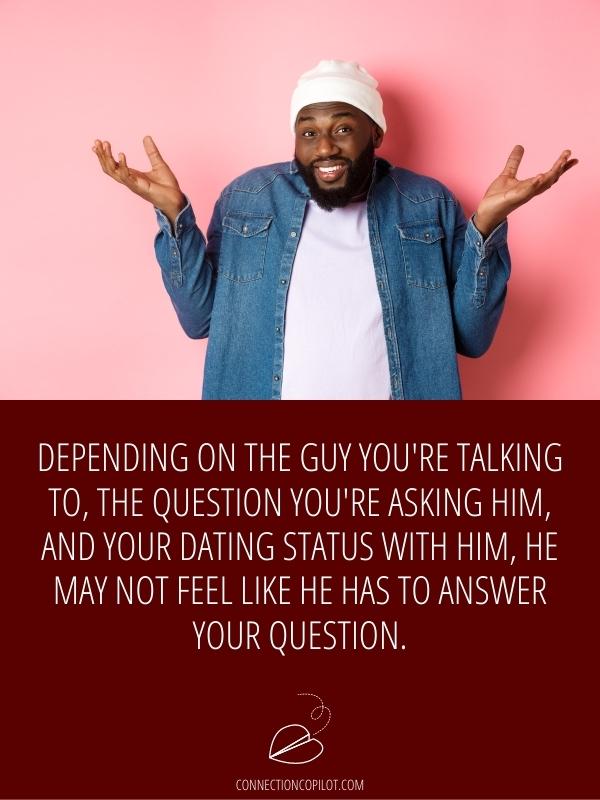 Depending on the guy you’re talking to, the question you’re asking him, and your dating status with him, he may not feel like he has to answer your question.

If you aren’t seeing the man, and he isn’t romantically inclined towards you, he’s likely not worried about whether or not he answers your question (or how you feel about it for that matter).

4. He Doesn’t Think You Deserve Answers To What You’re Asking

There are times that a guy dodges your question and avoids giving you his word simply because he feels that you aren’t deserving of the answer.

If Brad thinks you treat his friend poorly, he’ll likely dodge your question because he doesn’t find you deserve the answer.

5. He Has Low Self Esteem (and Is Scared To Answer) 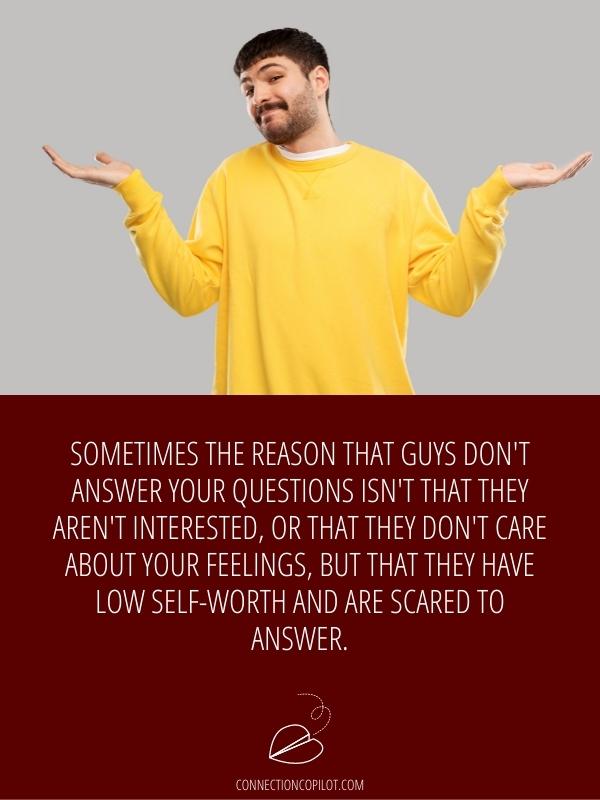 Sometimes the reason that guys don’t answer your questions isn’t that they aren’t interested, or that they don’t care about your feelings, but that they have low self-worth and are scared to answer.

You could be asking him what his favorite color is, he could be afraid you won’t like his answer and won’t think he’s worth talking to anymore.

Yes, girls, some guys really do think and act like that.

6. He’s New To Relationships (and Doesn’t Know How To Talk To Women)

When a guy is new to the dating scene and relationships in general, he may simply not know how to talk to women.

That means when you ask him hard questions, he may dodge them at first rather than cough up the answers.

Once he’s comfortable with you, ask him again because he’s likely to soften up as time goes on.

7. He’s Not Sure How To Answer (Because He Doesn’t Know the Answer) 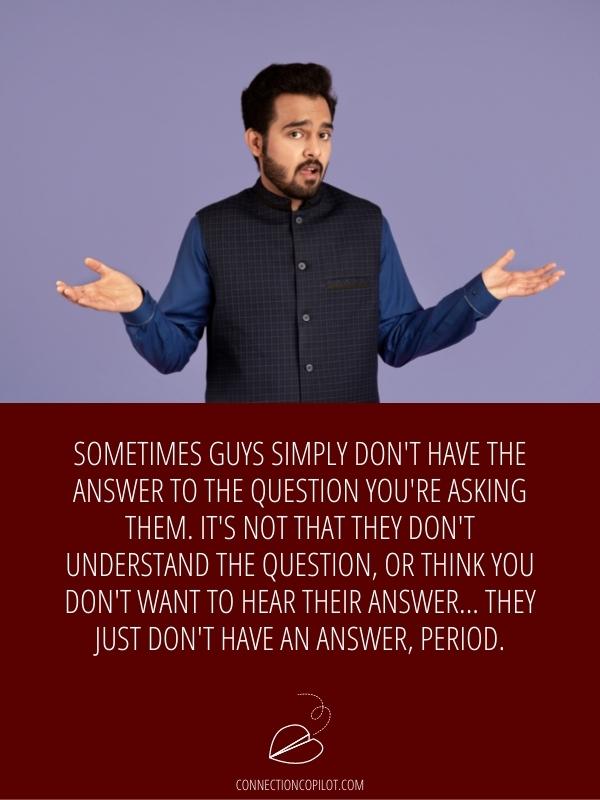 Sometimes guys simply don’t have the answer to the question you’re asking them. It’s not that they don’t understand the question, or think you don’t want to hear their answer… they just don’t have an answer, period.

Rather than letting you know that he doesn’t know what to say, he’s likely to say nothing at all or even change the subject.

8. He Is Still Thinking/Wondering About Ceratin Things

When a guy is uncertain about the answer to the question that you’re asking him and is still thinking about certain aspects of things, he might avoid answering you at first.

Once your man has enough time to further process things and pinpoint exactly how he feels/what he thinks, he’s very likely to provide you with a definite answer.

9. You Caught Him In the Moment (and He’s In Shock) 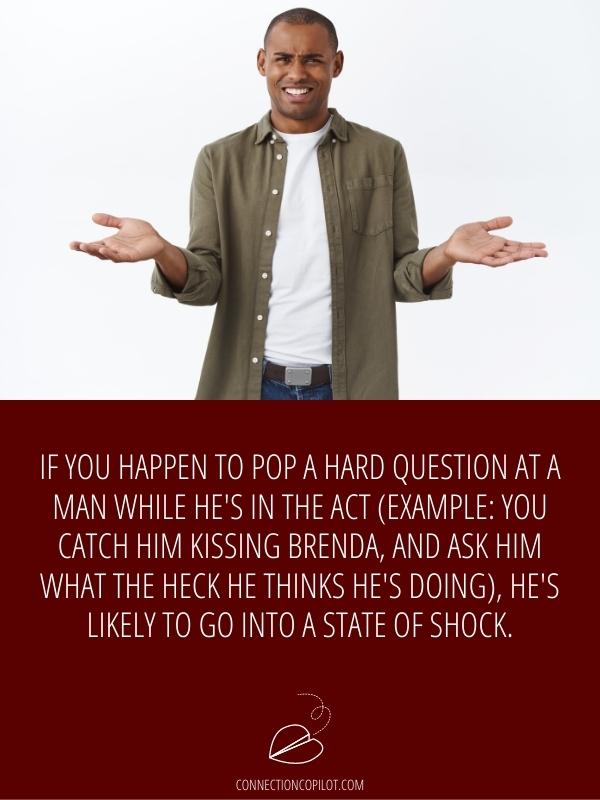 If you happen to pop a hard question at a man while he’s in the act (example: you catch him kissing Brenda, and ask him what the heck he thinks he’s doing), he’s likely to go into a state of shock.

Being caught in the act, he’s not likely to give you an honest answer even though you can see what he’s doing with your own two eyes.

10. He Wants To Keep Your Respect (and You Won’t Like the Answer)

Sometimes the reason a guy keeps you waiting on the answer to your question is that he believes you won’t like to hear his answer (and he wants to keep your respect).

The longer you’ve been friends, the easier it should be for him to tell you the truth.

But, if the question is about certain things, like how he feels about you (or other girls), he’s not likely to share what he’s really thinking.

11. Things Are Complicated (and He’s Afraid How You’ll React) 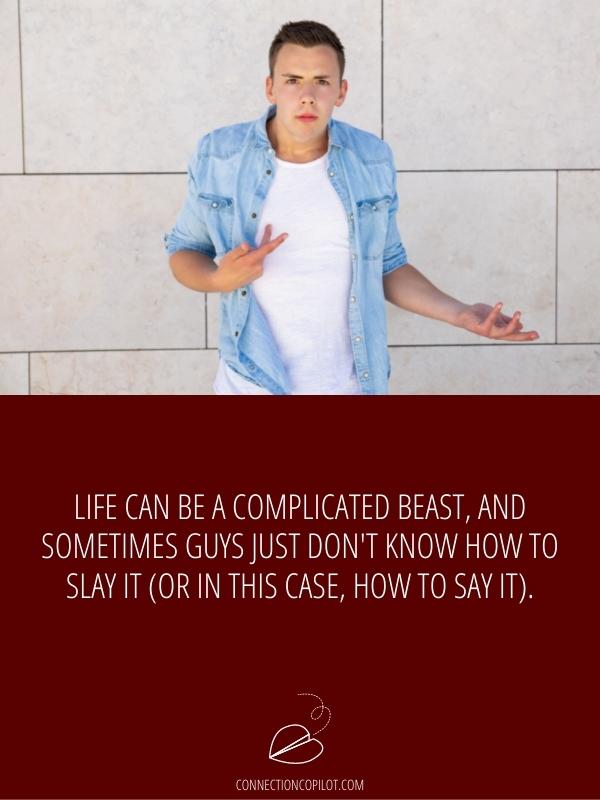 Life can be a complicated beast, and sometimes guys just don’t know how to slay it (or in this case, how to say it).

When things are complicated in their life, and in their head, but a man really likes you, he may not give you a helpful answer to your questions.

This is even more so the case when he’s afraid of how you’ll react to his explanation of the complications in his life.

12. He Wants To End Up Dating You (Not Having You Laugh at Him)

When a guy wants you to be his future, he knows he needs to be extremely interesting to you or you may get bored and become intrigued with someone else.

The issue arises when you ask a question with an answer that he feels may diminish his cool and fun persona.

13. He Has a Big Head and/or Wants To Make a Point

There are, of course, times that a guy refuses to answer your question simply because of his ego.

Whether your question’s answer makes him feel small, or he simply wants to show you that he’s the “Man”, he may ignore you and your inquiry.

This sort of behavior is most likely to happen at work or school but may occur anywhere that you interact with guys.

14. He Thinks You Want a Relationship (and Just Wants To Be a Friend)

If a guy seems hot and cold and avoids your questions, it could be because he thinks you want to date him and all he wants is to remain friends.

Rather than risking the friendship, and hurting your feelings, he may opt for playing possum and ignoring your questions.

15. He Wants a Relationship (and Thinks You Just Want To Be Friends) 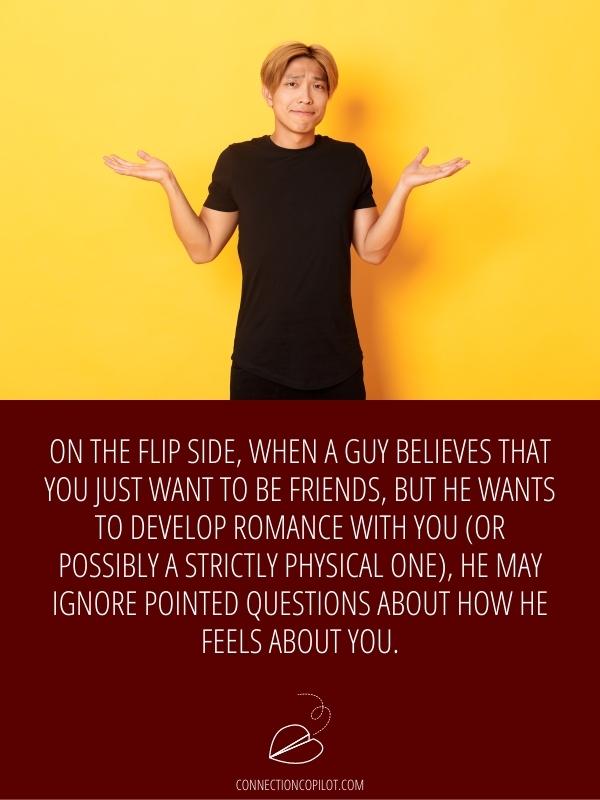 On the flip side, when a guy believes that you just want to be friends, but he wants to develop romance with you (or possibly a strictly physical one), he may ignore pointed questions about how he feels about you.

The last thing he wants to do is run you off before you fall head over heels in love with him!

How To Respond When Guys Don’t Answer Your Question

There are a ton of common meanings behind a guy not answering your question. Hopefully, with the reasons listed above, you’re able to pinpoint why it is that your guy isn’t answering you.

When you think you know why he’s avoiding the answer to your question, and you understand how it makes you feel, proceed with one of the following basic responses: 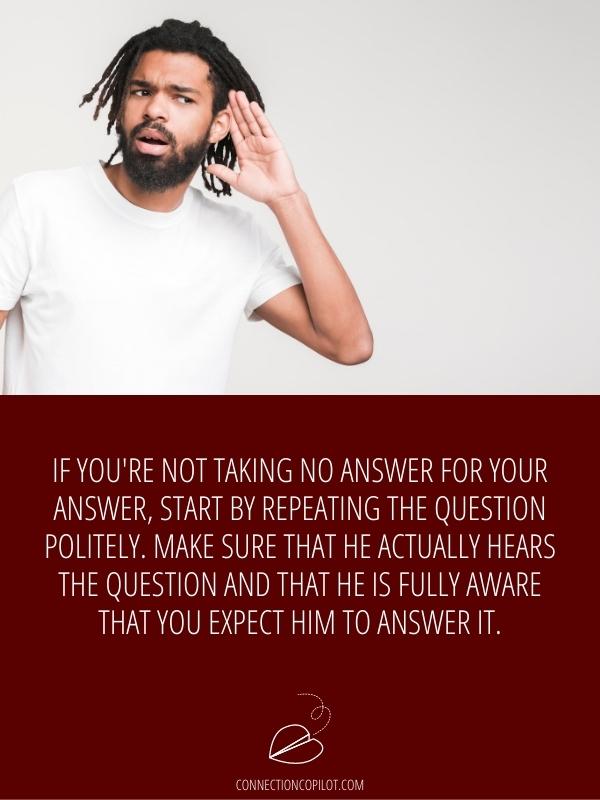 If you’re not taking no answer for your answer, start by repeating the question politely. Make sure that he actually hears the question and that he is fully aware that you expect him to answer it.

If you want that answer, and you don’t give a damn how he feels about it, repeat your question and make sure to make eye contact and show him hard body language like crossed arms and a tapping foot.

Forget About It and Go On With the Conversation

A neutral response is simply moving on with the conversation without answering your question. You can always circle back around to your question later on.

Hang Up the Phone and Give Him the Silent Treatment 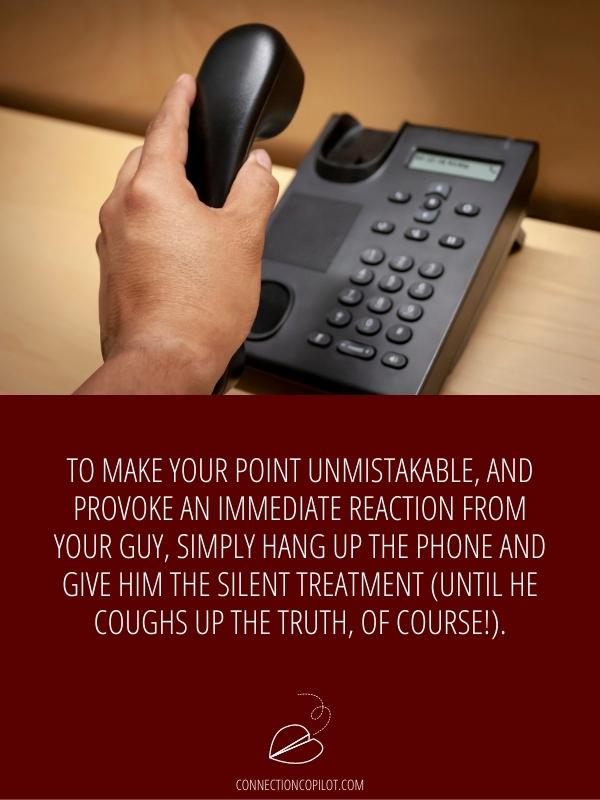 To make your point unmistakable, and provoke an immediate reaction from your guy, simply hang up the phone and give him the silent treatment (until he coughs up the truth, of course!).

If he cares about you and wants to be with you (including any hope of a future sex life with you), he’s not likely to take very long to get the idea through his head (and then he’ll blow up your phone with calls, voice mails, and text messages).

Remind Him That Being Honest Is important

If the answer to your question is important to you, don’t be afraid to be a bit vulnerable and let him know that being honest is important. Unless he’s a jerk, it should at least make him think about answering you seriously.

Demand A Straight Answer From Him 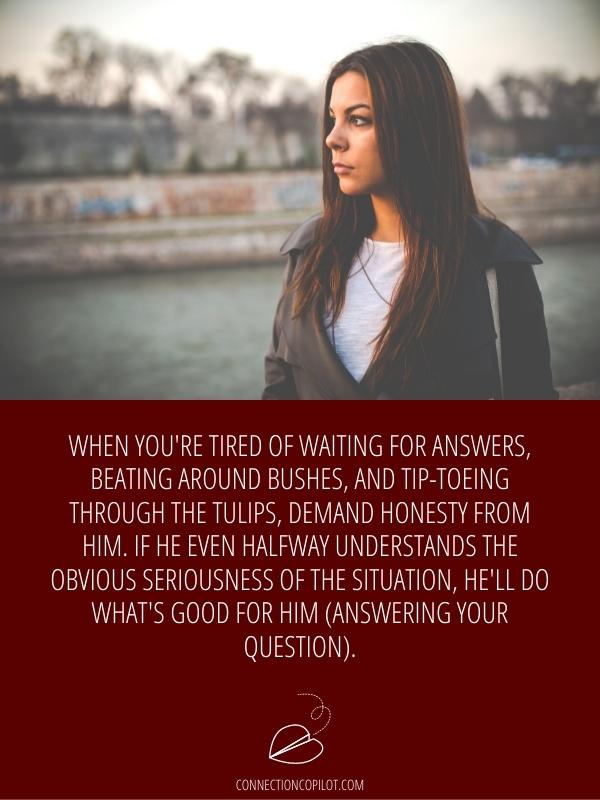 When you’re tired of waiting for answers, beating around bushes, and tip-toeing through the tulips, demand honesty from him. If he even halfway understands the obvious seriousness of the situation, he’ll do what’s good for him (answering your question).

What Does It Mean When Someone Avoids Answering a Question?

When someone avoids answering a question it’s typically because they are hiding something from you, they are scared you won’t like the truth, or they think they don’t have a good enough answer to give you at the time. That said, there are countless potential meanings for someone avoiding answering your question.

What Do You Do When Someone Ignores Your Question? 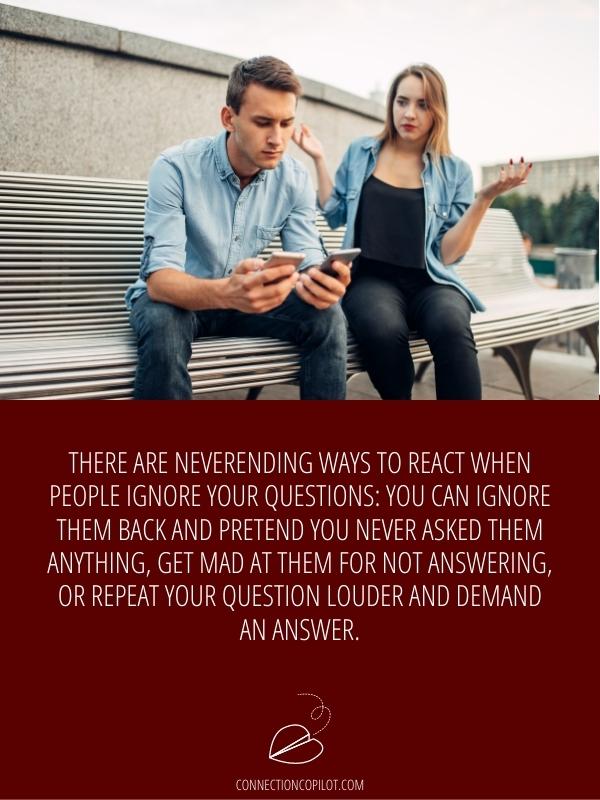 There are neverending ways to react when people ignore your questions: you can ignore them back and pretend you never asked them anything, get mad at them for not answering, or repeat your question louder and demand an answer.

What Does It Mean When a Man Doesn’t Answer Your Text?

When a man doesn’t answer a woman by text message right away, it doesn’t necessarily mean he doesn’t want to; he could be caught up with something and simply too busy, depressed about something, or otherwise incapacitated at the moment. If he doesn’t respond for days he could even have lost or broken his phone.