When a guy tells you that he appreciates you, the meaning may seem cut and dry… but, is it?

Read on below and explore the possibilities behind “I appreciate you” from guys!

What Does “I Appreciate You” Mean From a Guy?

So, he tells you that he appreciates you (and you like it) but his other body language and small gestures also leave you feeling like there may be more to his words than him simply expressing his gratitude and appreciation of you.

Always trust your gut! A woman’s instincts are rarely wrong (or so we’ve heard!).

Here are 10 of the most common meanings behind guys telling you they appreciate you:

1. He Wants You To Be Aware of His Appreciation 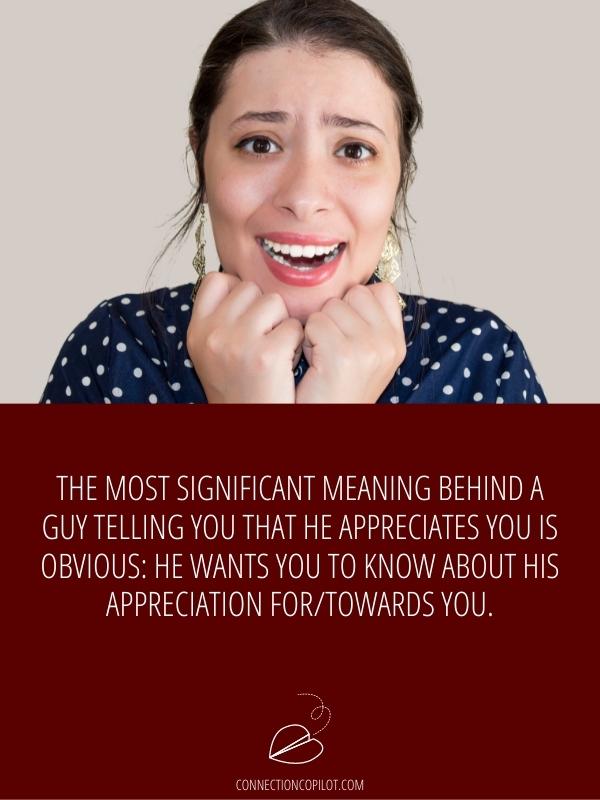 The most significant meaning behind a guy telling you that he appreciates you is obvious: he wants you to know about his appreciation for/towards you.

That doesn’t mean that every guy who says “I appreciate you” really means that he loves you and/or wants to be with you, however.

Sometimes it simply means that he appreciates something that you’ve done for him, or how good of a friend you are.

It’s important to watch guys’ body language when they give you compliments and voice their appreciation of/for you.

If their words say one thing, but their behavior doesn’t carry the same sort of respect, there’s a great chance that, to him, “appreciation” means sexual interests, rather than him necessarily feeling gratitude to the woman he’s talking to.

3. He Is Thankful for the Little Things 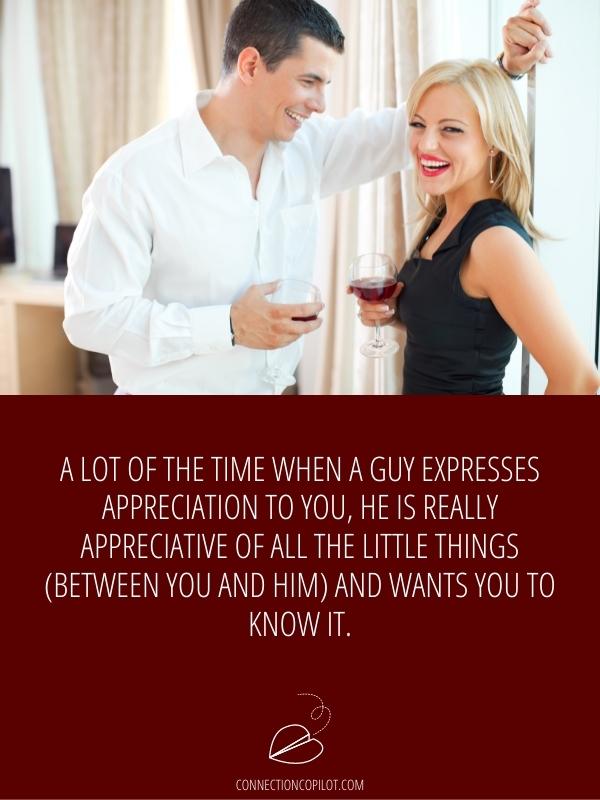 A lot of the time when a guy expresses appreciation to you, he is really appreciative of all the little things (between you and him) and wants you to know it.

He may be just realizing it, or he may simply feel like you need some support at the moment.

If he thinks your relationship is one of the greatest things in his life, he’s like to let you know how grateful he is with signs of kindness, gifts, and of course his words.

4. He Doesn’t Know How to Express Romantic Ideas

When a man doesn’t have too much experience with the opposite sex and attempts to express romantic ideas, his “I appreciate you” may actually translate to something like “wow, babe, you are straight gorgy!” or “Hey sexy! Nice to meet you. NetFlix and chill. My house. Tonight. Be There.?” in his head.

On your end of the conversation, you see that he is like a fish out of water. His body language appears confused, his face is red, and his eyes dart around.

If you’re into him, it’s a great time to step in and let him know that you’re also interested in a relationship. That said, if you’re not into him, it’s a good time to give him a sign that you’d prefer to keep things on a just friends level. 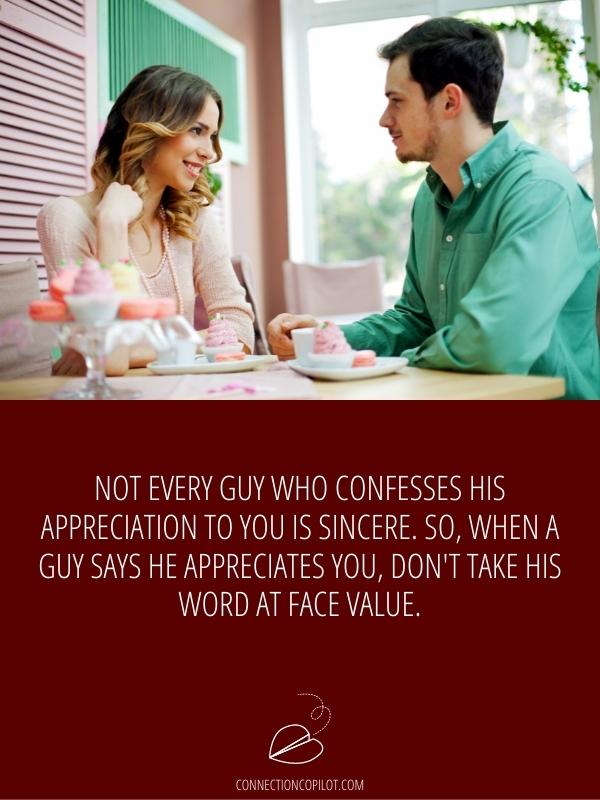 Not every guy who confesses his appreciation to you is sincere. So, when a guy says he appreciates you, don’t take his word at face value.

Sometimes guys just want to score points with you. I’m sorry, ladies, but, that’s just the way it is! The good thing about it is that guys who use false flattery on women as a point-scoring panty-dropping tactic are relatively easy to spot.

These guys’ body language is a dead giveaway; lots of direct eye contact accompanied by a broad and deep smile, twinkling eyes, lots of touching, and torrents of smooth-talking action.

6. He Believes You’re the Genuine Article

If a man believes that you’re the Genuine Article (all that and a bag of chips), he’s naturally likely to mention it while speaking to you. Even if he isn’t known for being forward, if he thinks so highly of you it’s not likely that he’ll hide his feelings forever.

At first, he may act shy about it, or keep it to himself, but once you’ve talked several times, and he begins to realize how he really feels about you, he’ll let you know that he appreciates you the next time you talk.

7. He Wants You To Know That His Soul Is In Your Services 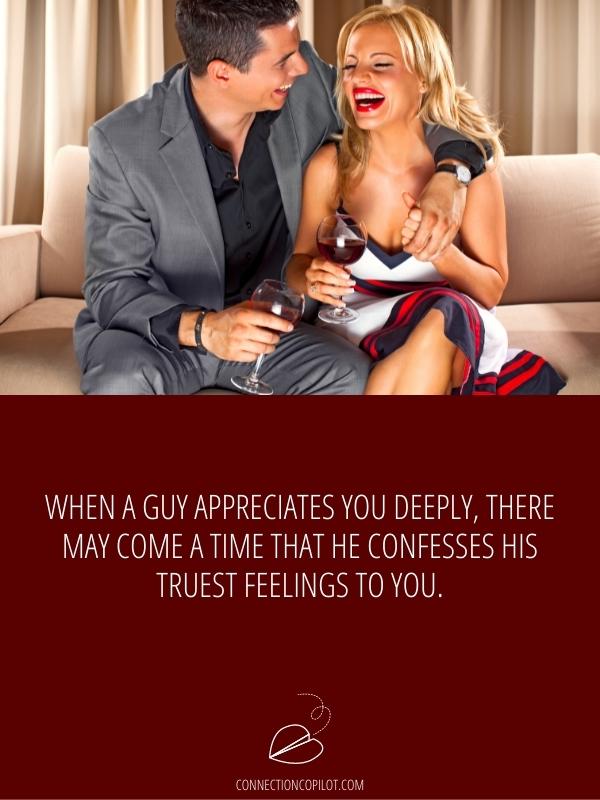 When a guy appreciates you deeply, there may come a time that he confesses his truest feelings to you.

He may, at this point in time, want you to know that his very mortal soul is forever at the beck and call.

Just snap your fingers, girl, as your wish is now his command.

8. He’s Expecting Something (Conversation.. or a Relationship)

Despite the fact that most of the time a guy tells you that he appreciates you, he more than likely means it, there are of course men out there who are expecting something in return for their compliments.

Whether it is a longer conversation, or perhaps the chance at a relationship (or sex), depends on the guy, how you know him/how he feels about you, and more.

Just remember that you don’t owe him any favor for him expressing appreciation, and if he truly does appreciate you he wouldn’t expect any favors.

9. He’s Wants To Matter To You 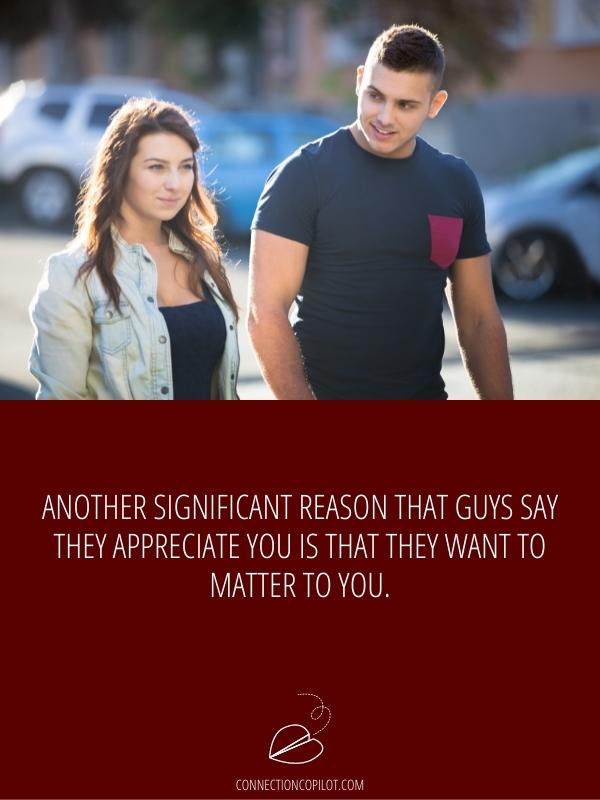 Another significant reason that guys say they appreciate you is that they want to matter to you.

By telling you that you matter, they hope you’ll admit feeling the same or start to appreciate him as well at the very least.

Further, consider that if they want to be in your life that badly, they must see/hope for great things in their future with you.

If a guy is about to give you a really good present, he may also tell you how much he appreciates you right beforehand.

It may be sort of cliche, but, what can we say, we guys are pretty basic sometimes.

In the minds of many men, nice gifts and words of appreciation go a long way to win the heart of the girl you love.

How To Respond To “I Appreciate You” From a Guy

When a guy tells you that he appreciates you, there are several different ways you may react depending on how his words strike you. But, first, you need to focus on how his words make you feel as your reaction determines how things progress.

Here are a few of the best ways to respond to a guy when he tells you that he appreciates you:

1. Thank Him (and Return the Compliment) 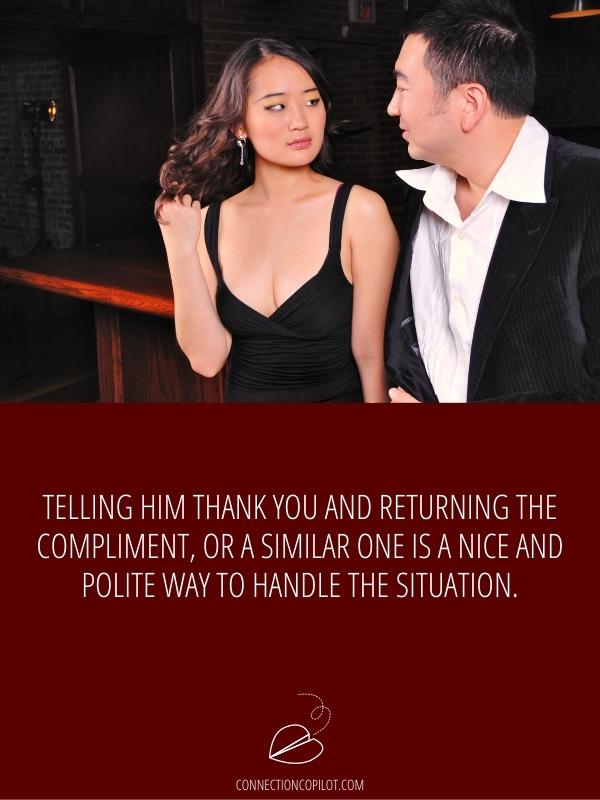 Telling him thank you and returning the compliment, or a similar one is a nice and polite way to handle the situation.

If you are into the guy, and actually appreciate him, consider taking the opportunity to really let him know how you feel about him?

2. Thank Him (and Don’t Return the Compliment)

If you are not into the guy who is complimenting you, one of the easiest ways to react is to simply thank him and leave it there.

There is no need to return the compliment if you don’t feel the same way, as doing so would be untrue. 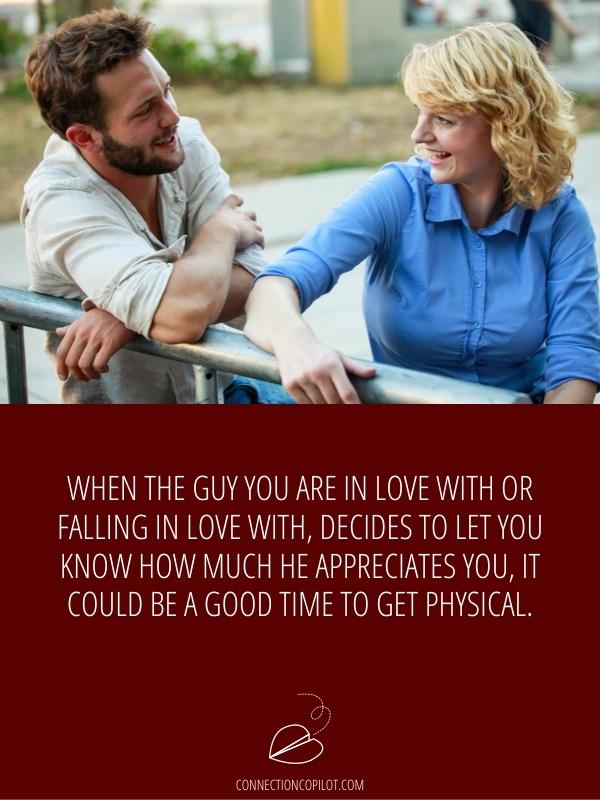 When the guy you are in love with or falling in love with, decides to let you know how much he appreciates you, it could be a good time to get physical.

That is not to say that you should just hug, kiss, and sleep with all the guys in your life who appreciate you (because you absolutely should not).

4. Tell Him To Get To the Point (If You Know He’s Up To Something)

When you know that he’s up to something with all his sweet words, tell him to get straight to the point.

If he’s a friend he’ll more than likely be amused at your directness (if not turned on by it).

5. Be Grateful for Being Appreciated 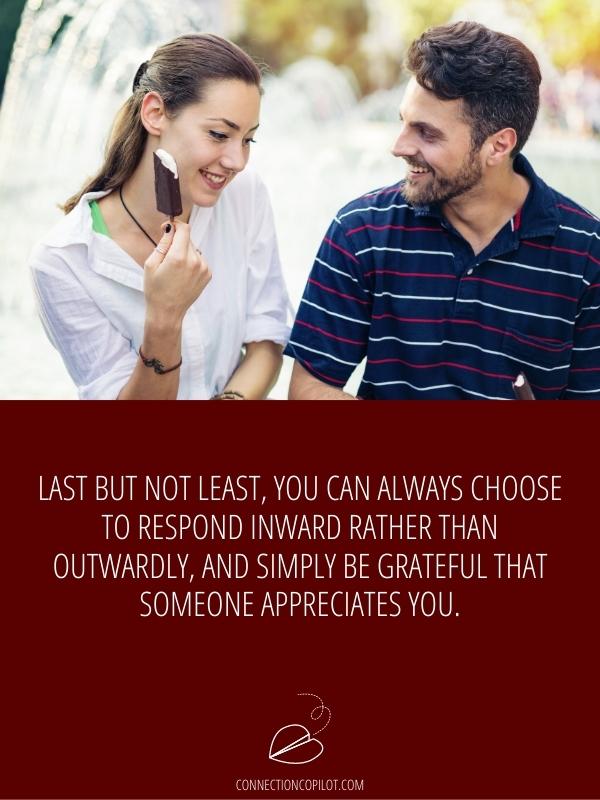 Last but not least, you can always choose to respond inward rather than outwardly, and simply be grateful that someone appreciates you.

However, the main issue with this response is that the guy is left clueless about how you feel (after just confessing how he feels).

What Is the Difference Between I Love You and I Appreciate You?

“I love you” is a deep and sincere statement from someone who has strong romantic feelings for you. “I appreciate you” is a similar statement but from a place of thankfulness and gratitude rather than romance and physical interests.

Appreciation does not necessarily mean that someone loves you as much as it is a sign of their gratefulness and thankfulness towards you. That said, appreciation may absolutely come from a place of love depending on who is doing the appreciating.

What Does It Mean When Someone Says They Appreciate You?

When someone tells you that they appreciate you, it is generally exactly what it seems like. However, there are times that an “I appreciate you” could mean “I’m interested in you”, “I’d like to get to know you”, or “I think we should blow this popsicle stand and go have steamy sex.”