Even when things seem to be going great, there’s always a chance your guy may ghost you… even after 3 months of dating.

Read on and learn 11 reasons why guys ghost after 3 months and how to prevent it from happening to you!

Why Guys Ghost After 3 Months

Here are 11 of the top reasons why:

1. He Feels Too Smothered by Your Affection 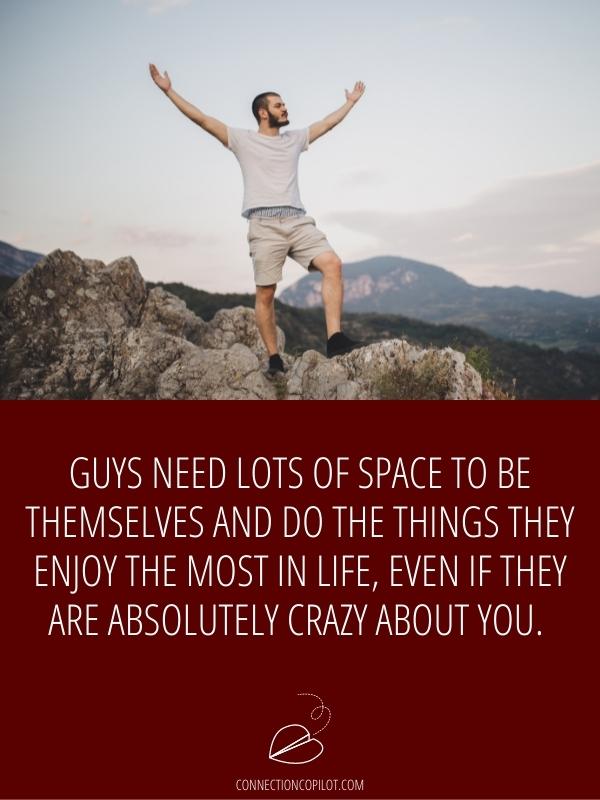 Guys need lots of space to be themselves and do the things they enjoy the most in life, even if they are absolutely crazy about you.

If you aren’t giving him the space he needs, and deserves, he may feel too smothered by your affection and end up ghosting you.

The best way to avoid this sort of ghosting is to make sure he has plenty of time and space to remember who he is as an individual.

2. You Didn’t Pass Their “Relationship Tests”

Guys aren’t the only ones who have certain “tests” they put new potential partners through. Sometimes people don’t even realize it’s what they’re doing, but doing it indeed they are.

If you failed to pass relationship tests, a guy may just ghost you, even after three months.

Rather than go through the depressing circumstances of explaining to you that you don’t fit his picture of an ideal long-term partner.

3. They Got What They Wanted From You (Lots of Sex)

It’s no secret, a lot of men are after one thing and one thing only… as much sex as they can possibly get. That said, not all guys are cheaters, and don’t necessarily need/want sex from multiple partners.

But, even in the case you are dating an honest guy for the past three months, he may still ghost you if he’s gotten all the sex he wants. 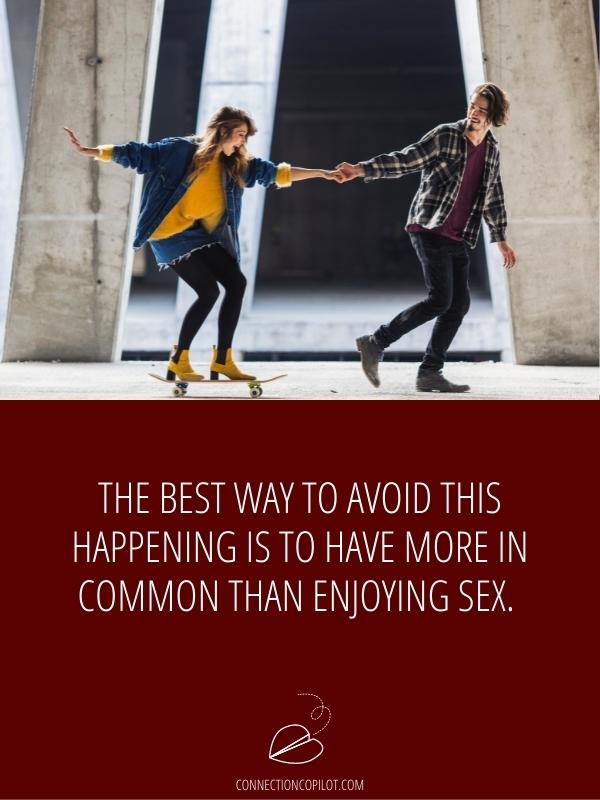 The best way to avoid this happening is to have more in common than enjoying sex.

When a guy’s finances take a sudden blow, he is just as likely to ghost a girl he cares about rather than deal with the humiliation of explaining why he can’t afford her the same things he has for the past three months.

It’s a sad situation, but easily avoidable if your guy knows that you are into him for far more than his finances.

Sure, what girl doesn’t like being pampered? But, if that’s all he thinks your about, he could ghost you in a heartbeat when his money situation changes for the worse.

5. They Don’t Like The Future They See on the Horizon

Every now and then when things seem amazing and he suddenly ghosts you it’s actually because he’s looking into the future and doesn’t like what he sees.

Whether he feels like you have no plans or aspirations, or he thinks that your ambitions are too far-fetched, he could dip at a second’s notice. 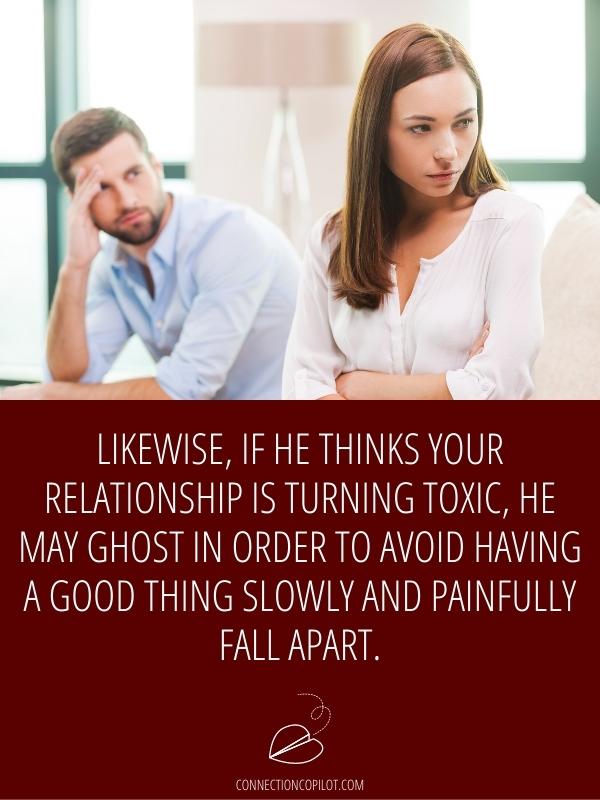 Likewise, if he thinks your relationship is turning toxic, he may ghost in order to avoid having a good thing slowly and painfully fall apart.

6. Your Life and Relationships are Too Complicated

Some girls have really complicated personalities, relationships with others, and life in general, and sometimes it’s too much for a guy to handle.

If you have strained relationships with your immediate family, for example, yet keep in constant touch with your ex, he may have a problem understanding.

Further, if you have too much going on, with school, children, family, and work, it might just be too much for him to want to deal with… and he may ghost you, even after months.

7. You Don’t Seem Complex Enough for Them 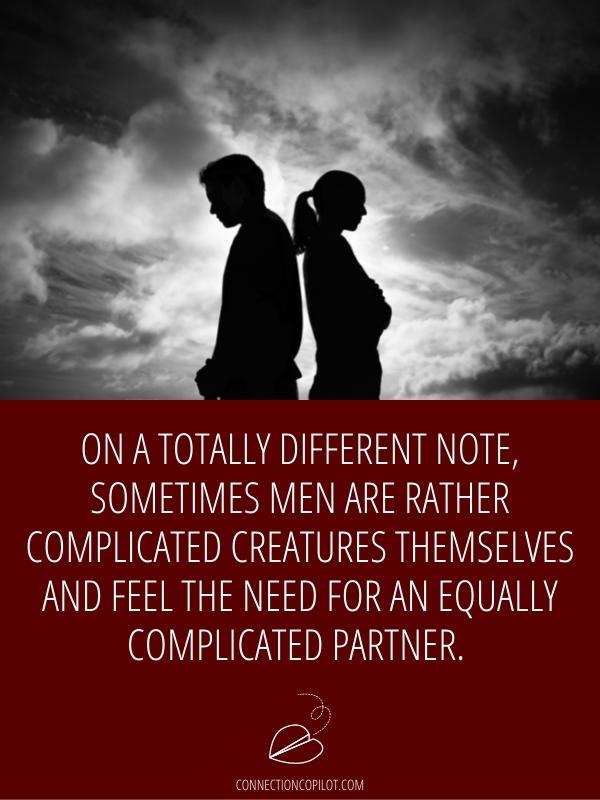 On a totally different note, sometimes men are rather complicated creatures themselves and feel the need for an equally complicated partner.

If you don’t seem complex enough for him over the first three months of dating, he may lose interest or simply find you too simple.

At any rate, if you don’t seem complicated enough for his liking, he’s likely to ghost you after a few months.

8. You Were a Rebound and Now They Don’t Need You

There is always the off-chance that you were a rebound chick for your last guy and that’s the reason he ghosted you.

If you’re raking your head and can’t figure it out, this may be the reason: he needed you to help him feel better about himself again, and now he does and doesn’t need you anymore.

It’s sad, but it really is that simple sometimes when guys ghost after several months.

9. They Secretly Have Another Partner 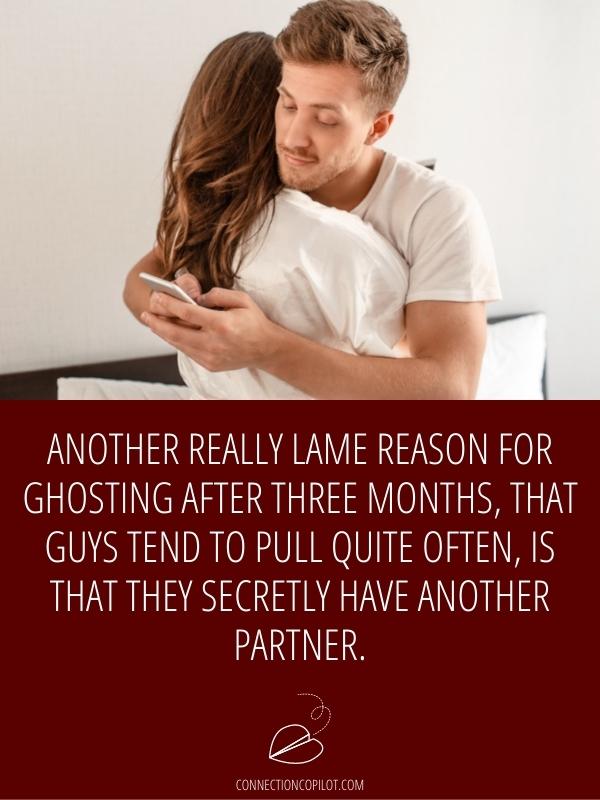 Another really lame reason for ghosting after three months, that guys tend to pull quite often, is that they secretly have another partner.

Most of the time that this sort of thing happens, the guy will ghost whoever is the new partner, opting to stick with what is well-known and comfortable to them.

In this case, there isn’t much you can do, or should do for that matter(other than possibly find out who his partner is and snitch on him!)

10. They Are Prioritizing Themselves

From time to time, guys decide all of a sudden that they’ve been investing all of their time, money, and energy into other people and things, including you.

When they make the snap decision to start prioritizing themselves, they often do it in a clunky and selfish way; ghosting you on the spot.

You may count this as a blessing in disguise, as someone who doesn’t have the decency to explain to you that they simply need some space may not deserve your affection anyhow.

11. They Are Playing Hardball 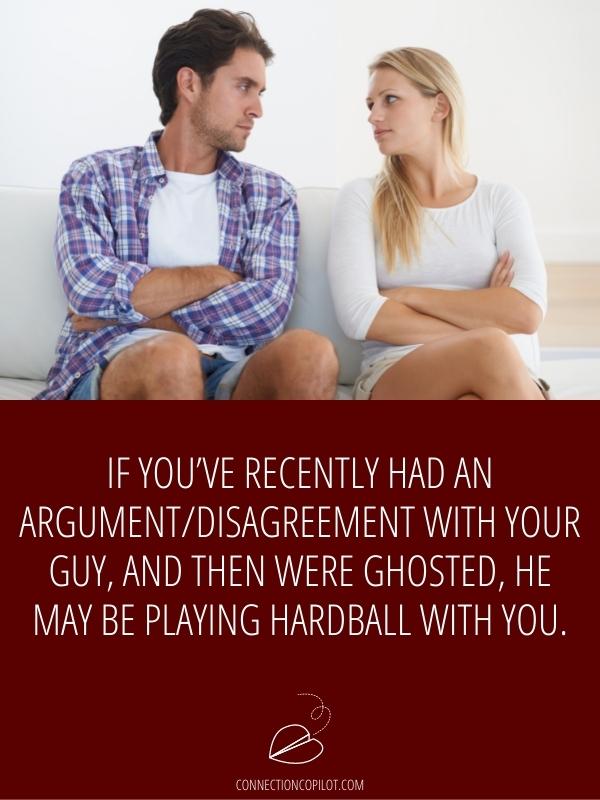 If you’ve recently had an argument/disagreement with your guy, and then were ghosted, he may be playing hardball with you.

Depending on what the situation is, he could want you to confess to something, apologize for something, or come begging for attention, mercy, or something else altogether.

Only you can figure out what it is he may be playing hardball about, because in these cases they aren’t likely to tell you what it is.

How to Stop Guys From Ghosting After 3 Months

Now that you’re familiar with some of the top reasons guys ghost after 3 months, let’s take a look at some of the steps you can take to stop it from happening to you:

Why do guys ghost you after months?

There are tons of reasons why guys may ghost you at any time, let alone after three months. The most common reasons for ghosting after so long, however, are that his feelings changed or he is feeling pressured to get married, move in, merge finances, or have children too soon.

Why do guys ghost after a long?

Most of the time guys ghost, it has nothing to do with you. But, that isn’t always the case. Sometimes it is directly related to your looks, personality, or plans for the future. More often though, guys ghost because they aren’t ready for long-term commitments or don’t feel good enough for you.

How long will a guy ghost you?

Guys may ghost you for a few days, weeks, months, and, yes, even years. In severe cases, you may never hear from a guy who ghosted you ever again. Then again, if they want to hook up with you again, they may come up with an excuse and reach back out, or at least be receptive to you reaching out to them.