There is an almost endless amount of reasons that guys get sheepish around you, some more shocking than others. Read on below and explore these 11 reasons guys act shy around you!

Why Guys Act Shy Around You

1. He is Super Attracted to You 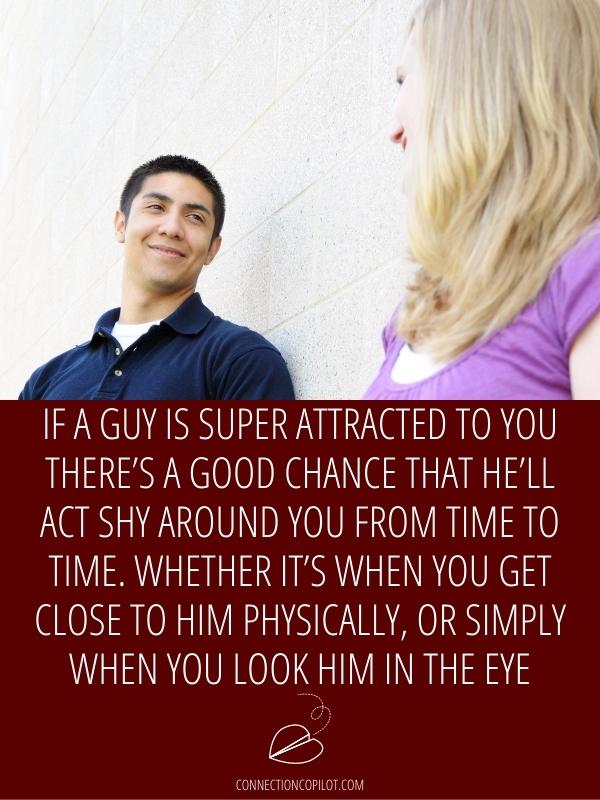 If a guy is super attracted to you there’s a good chance that he’ll act shy around you from time to time. Whether it’s when you get close to him physically, or simply when you look him in the eye, there’s bound to be something that you do that pushes him over the edge.

2. He’s Shy Around Everyone

Believe it or not, some guys really are just shy around everyone. That goes double for the people that he’s attracted to the most… like you. That means even as you get to know him better he’ll retain some of his shyness. The best way to ease the situation is to be understanding and not tease him about being shy too much.

3. He’s Been Thinking About You 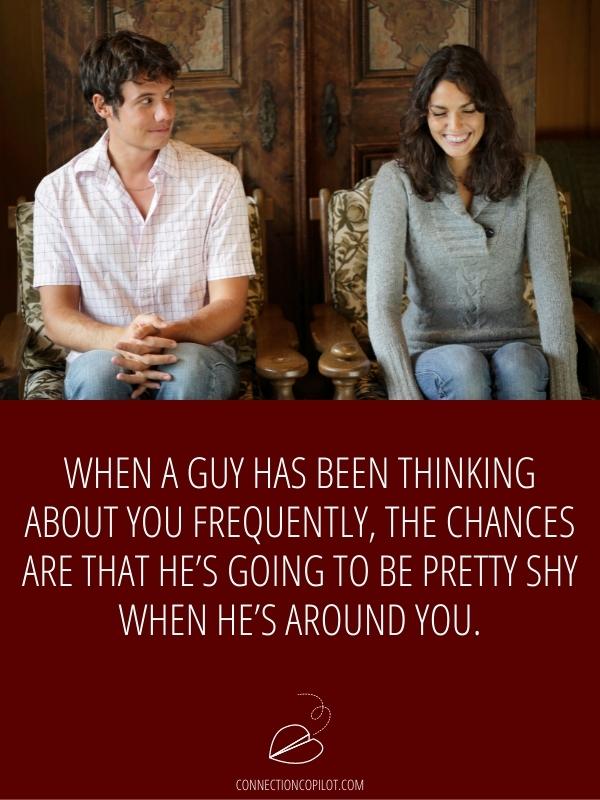 When a guy has been thinking about you frequently, the chances are that he’s going to be pretty shy when he’s around you. Whether he’s thinking about dating you, getting physical with you, or otherwise, all his thoughts of you come flooding into his mind when he sees you in person. The deeper your relationship gets, the more he’ll think about you but the less shy.

4. He’s Been Talking About You

Likewise, when guys spend a lot of time talking about you to other people they tend to be a bit shy when you come around. They may be embarrassed, knowing your friends told you what they had to say, or how often he asked about you, or just overwhelmed to finally see you in the flesh again.

5. He Thinks Your Judging Him 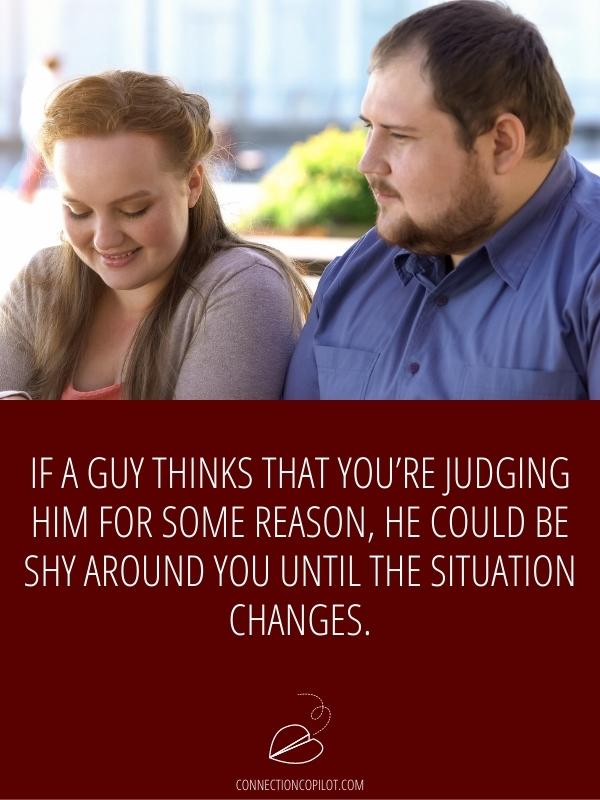 If a guy thinks that you’re judging him for some reason, he could be shy around you until the situation changes. Whether he thinks you’re upset about something he did, his religion, or where he lives, he’s bound to be shy about it as long as he thinks you feel some kind of way about it. The best way to avoid this is by always being open and honest with guys, about how you feel.

6. He Wants to Ask You Something

Sometimes guys get something in their head that they want to ask you, but for whatever reason, they won’t let themselves ask. When this happens, they tend to get shy around you until they find the nerve to actually ask you the thing they want to know. They could want to ask you on a date, how you feel about them as a potential partner, or what your favorite food is. The more they fear your answer, the shier they may act until they get their answer.

7. He’s Blinded By Your Beauty 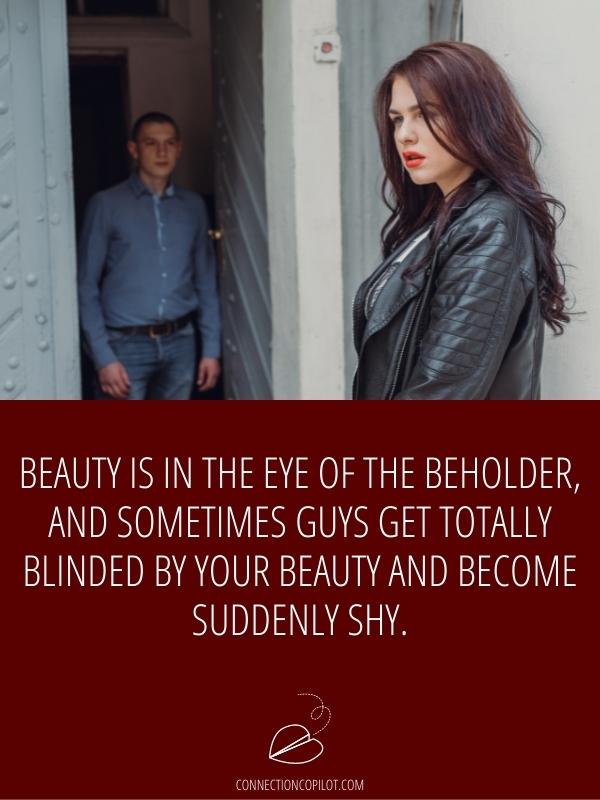 8. He’s Changed His Mind About You

When a guy is in a relationship with you, but for whatever reason changes his mind about you, there’s a good chance he may act shy with you until he spills the beans. The bad thing is that if he doesn’t have another relationship lined up, he may string you along for a while before letting you know he’s changed his mind about things.

9. He’s Not Sure What to Think 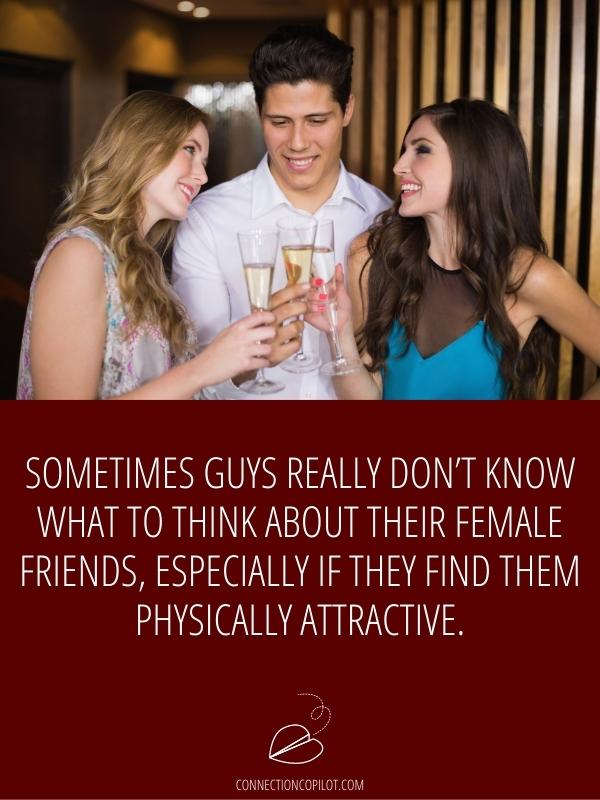 Sometimes guys really don’t know what to think about their female friends, especially if they find them physically attractive. Respect, physical attraction, admiration, and other feelings can indeed be confusing. That said, when he’s not sure what to think, he could get shy around you until he has a better understanding of his mental state towards you.

10. He Has Something to Hide

Unfortunately, there are times that guys are shy with you because they are trying to hide something from you. Whether it’s something good, or something bad, doesn’t make much of a difference; guys act shy in both scenarios. The good thing is that once his secret is out in the open he should go back to normal.

11. He Thinks You’re Dating Someone 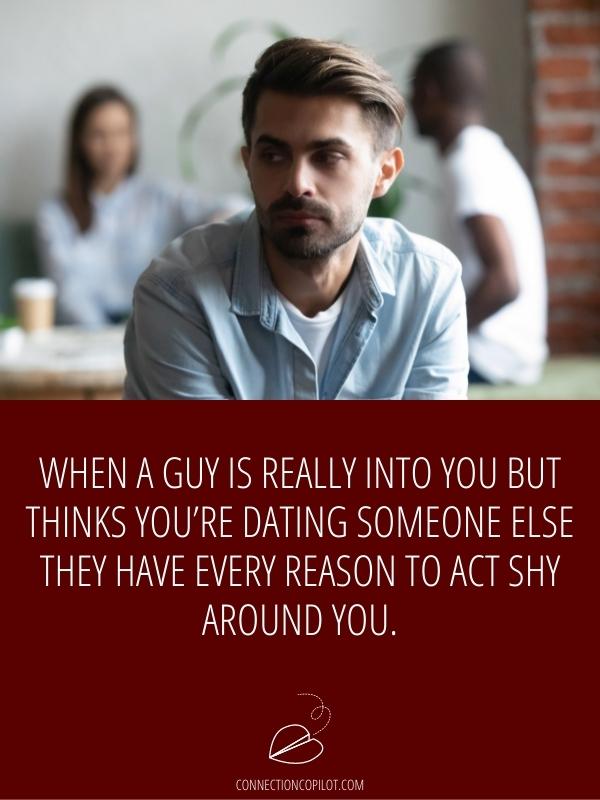 Why do guys get shy around girls they like?

There are a million reasons why guys get shy around the girls they like. A few of the most common reasons guys get shy around girls overwhelming physical attraction, nervousness, fear of judgment, not wanting to look like a fool, or thinking that you are already in a romantic relationship with someone.

How do you tell if a guy is shy or just not into you?

If a guy isn’t into you, he won’t be very enthusiastic when you start conversations with him. He also won’t be undressing you in his mind, or otherwise getting worked up over you. A shy guy on the other hand will get extremely worked up when you start talking to him if he likes you. He’ll also get excited in other ways as well!

How does a shy guy show his love?

Shy guys aren’t usually the first ones to open up in a relationship, but they are generally very receptive to talking about their feelings. They may be quiet compared to macho guys, but they tend to be sweet, kind, and thoughtful. Shy guys show love by texting you first thing in the morning, and last thing at night, and making sure you always know that they love you.