Vulnerability is a generally attractive quality, though it’s always the most attractive when someone else is the one being vulnerable.

Guys are especially prone to finding vulnerability an attractive feature, yet are the least likely to allow themselves to be vulnerable in a relationship.

Read on below and learn 11 reasons guys don’t like being vulnerable and how to fix it!

From feeling weak, girly, or misunderstood, to feeling that they’re being pressured to deal with the mental baggage they’d rather leave unchecked, there are quite a few reasons guys don’t like being called vulnerable.

Here are some of the top reasons:

1. It Makes Them Feel Weak 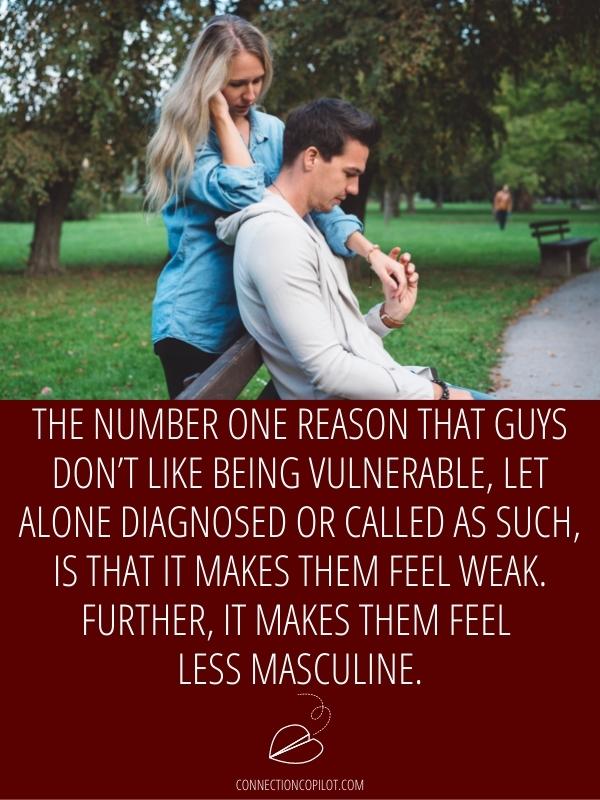 The number one reason that guys don’t like being vulnerable, let alone diagnosed or called as such, is that it makes them feel weak. Further, it makes them feel less masculine. The more they feel that way, and the more you call them vulnerable, the less predictable your relationship with them may become. If these thoughts and feelings continue, you may have a sad and depressed guy on your hands that’s confused about how he measures up in your eyes (let alone about where your relationship stands).

A major issue with calling a lot of guys vulnerable is that they tend to think that you’re poking fun at them. You may simply be recognizing their signs of vulnerability, and pointing it out with love and appreciation, but that doesn’t control how they’ll react to it. It’s the little things that kill us sometimes, and as they say, the road to hell is partially paved with good intentions… meaning that if you notice his sincere vulnerability towards you, you don’t necessarily need to spoil things by pointing it out and making it awkward for him.

3. They Think It Makes Them Look Girly

The third entry on our list of reasons guys don’t like being vulnerable, or called as such, is that they think it makes them look girly. They think that you, and anyone else who’s around to witness you calling them vulnerable, see them as less manly. In their mind, you, and everyone else, might as well be outright calling them a sissy. That’s because, in the minds of many guys, there isn’t much more feminine, or girly, than being openly vulnerable. 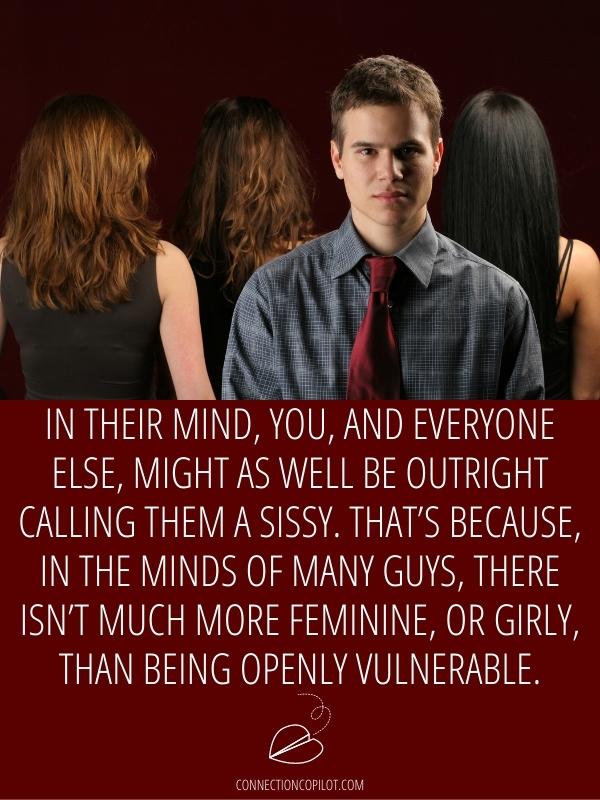 5. They Want To Seem Strong, Not Vulnerable

Strength is one of the main features guys what you to take note of in them, something that is often seen as the opposite of vulnerability. So, it should come as no surprise that when you point out their vulnerability, some guys take it as no different than you pointing out that they are weak… which is not something they are bound to take lightly. If your guy is a little more macho than the next or hangs around macho guys, do yourself a favor and pretend not to notice his vulnerability (at least with your words). 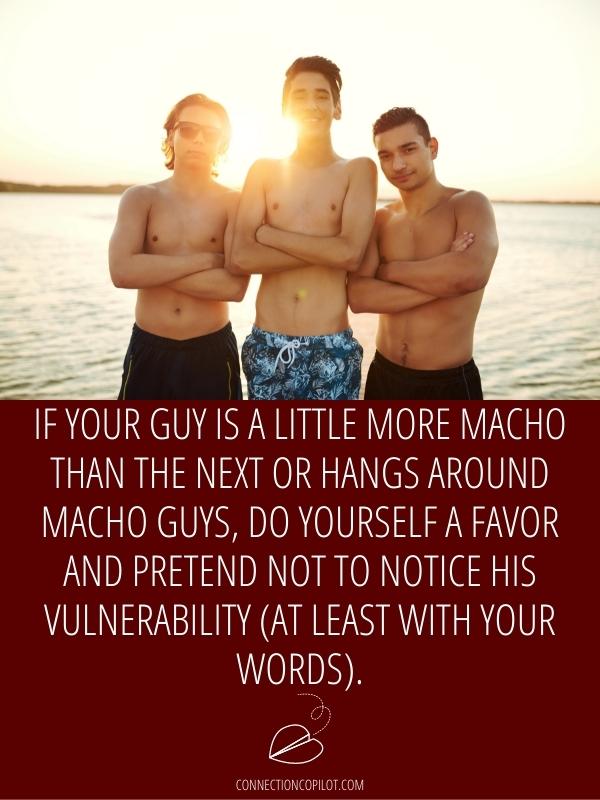 6. They Would Rather Ignore Issues

A lot of guys are relatively simple when it comes to the politics of relationships. They are either one or not. For these types of guys, that’s about as deep as their thinking into things goes. Anything else is just another issue to ignore until it goes away or ends up being the thing that breaks the relationship apart. But, for now, they’d rather not be vulnerable, and simply ignore issues.

7. They Have Hidden Scars

The reason that a lot of guys choose to ignore issues in relationships isn’t that they are scared of dealing, but that they are just scarred from the pain and trauma of previous relationships. Even more, they know that if they get vulnerable with you, and the chips are down, there is no walking away from the table until the cards have played out. And, they just might not be willing to make that high-stakes of a wager just yet.

8. They Are Used To Feeling Mad, Sad, Bad

Some guys get so used to ignoring their feelings and guarding all of their vulnerabilities that they are simply used to feeling sad, bad, mad, and everything but happy, cuddly, and glad. In these cases, if you spot some bit of vulnerability he’s showing you, cherish it but don’t speak of it! The more vulnerable he becomes, the happier he’ll be. Speaking up, and pointing it out, may scare him right back into his shell of emotional numbness.

9. They Would Rather Laugh Than Cry 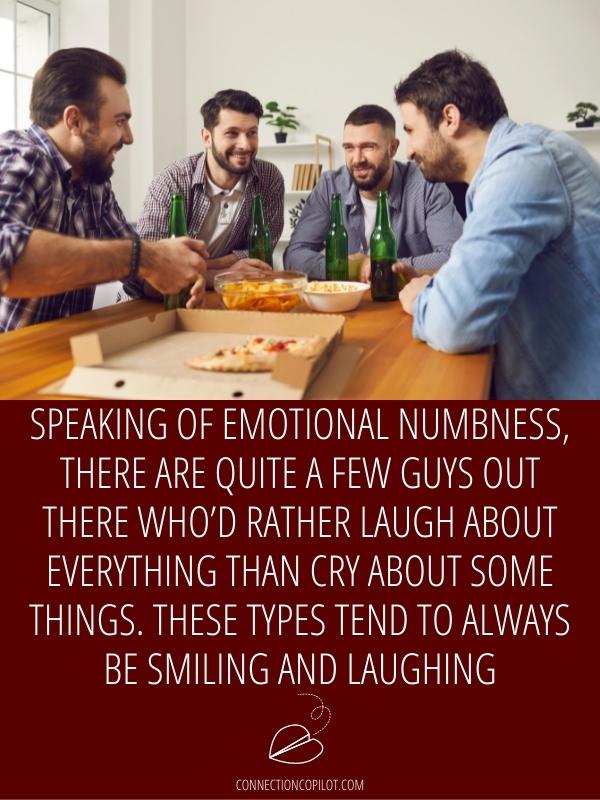 Speaking of emotional numbness, there are quite a few guys out there who’d rather laugh about everything than cry about some things. These types tend to always be smiling and laughing, even though deep down on the inside they may be on the constant verge of tears. When this sort of guy gets vulnerable with you, it’s best to laugh along with him and make him feel comfortable rather than show him how touching it is to you by mentioning as much in words right away. If he’s the one, there will always be time to discuss deeper feelings later on!

If you hadn’t guessed already, emotions seem like nothing more than a waste of their damn time to more guys than we’d probably care to admit. Regardless if it’s because these guys just haven’t met the right woman yet, or that they had a terrible childhood, they simply want no part of emotions or any of the icky thoughts and/or feelings that come along with them. Least of all, they don’t want to be put on the spot, by being called vulnerable and feeling forced to think and talk about their emotions.

11. It’s Just Not Macho To Be Vulnerable

Times are changing, and so are the opinions of the masses. However, one thing that hasn’t quite shifted yet is that most men feel like it’s just not a macho thing to act/be/look vulnerable. Incredibly, some guys are more willing to accept their friends pretending to be vulnerable to get laid than they are willing to respect genuine vulnerability towards others. 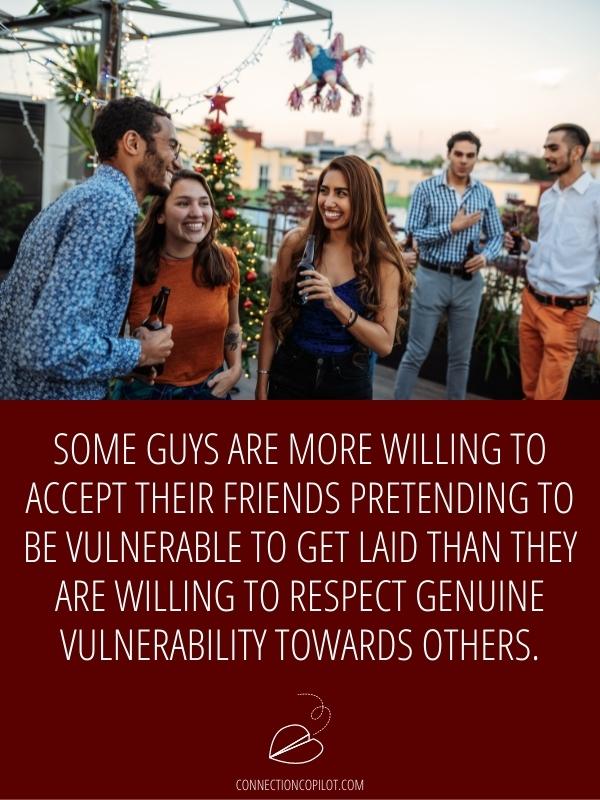 How to Help a Guy Be Vulnerable

There are many ways to help a guy be vulnerable, whether he wants that help or not is a whole different story altogether!

Here are a few of the most common ways:

Is Vulnerability Attractive To Men?

Vulnerable women are extremely attractive to most men because they see vulnerability as a sign of honesty, knowing one’s self, and even as some form of purity. More or less, guys feel like vulnerable women will be better partners than women who are always hiding behind a mask and shield.

What Does It Mean For a Guy to Be Vulnerable?

When a guy is vulnerable he opens himself up to you, regardless of what other people will think, say, or do. He is himself towards you and in all things you do he allows you to see and get to know the real him.

How Do Guys Show Their Vulnerability To You?

Guys show their vulnerability towards you in obvious ways like wanting to show you off to their friends and introduce you to their family. They are open and honest with you about who they are, and how they feel about you, and are generally all around as transparent as humanly possible.