Guys can be pretty sensitive to certain things, macho or not. Being called cute is one of those things that deeply bothers a lot of guys. Read on below and explore 10 reasons guys hate being called cute!

From being reminded of their mothers to feeling like you don’t take them seriously, there are a plethora of reasons why guys don’t like being called cute.

Here are a few of the most common ones:

1. It Makes Them Feel Childish 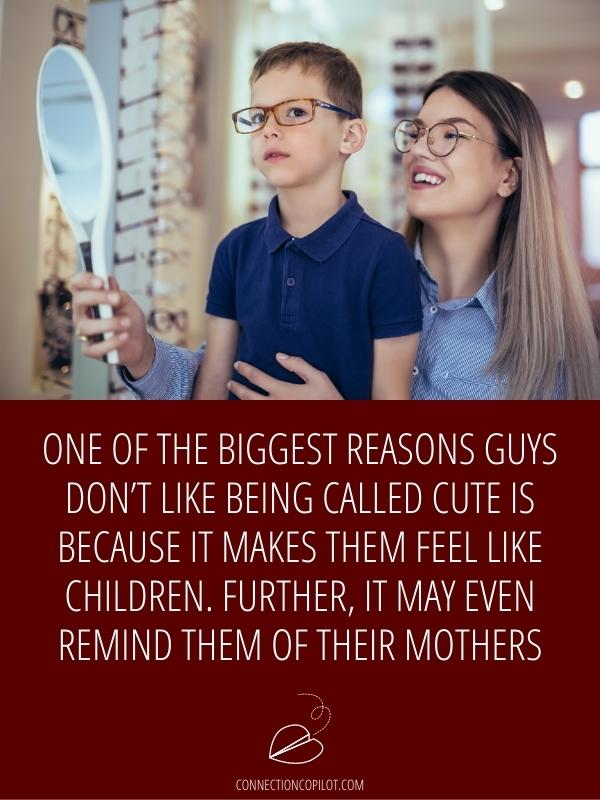 One of the biggest reasons guys don’t like being called cute is because it makes them feel like children. Further, it may even remind them of their mothers and other female family figures that called them cute for years (when they were children). Most guys would rather leave their “cute” days behind them and become recognized as strong, capable, sexy men.

2. They Think You Don’t Take Them Serious

The second reason on our list of reasons guys hate being called cute is that it makes them think you don’t take them seriously, be it during a specific situation or in general. Guys want don’t want to be cute, they want to date someone that’s cute. Calling him cute is sort of like calling him an adorable little girl, or little boy. 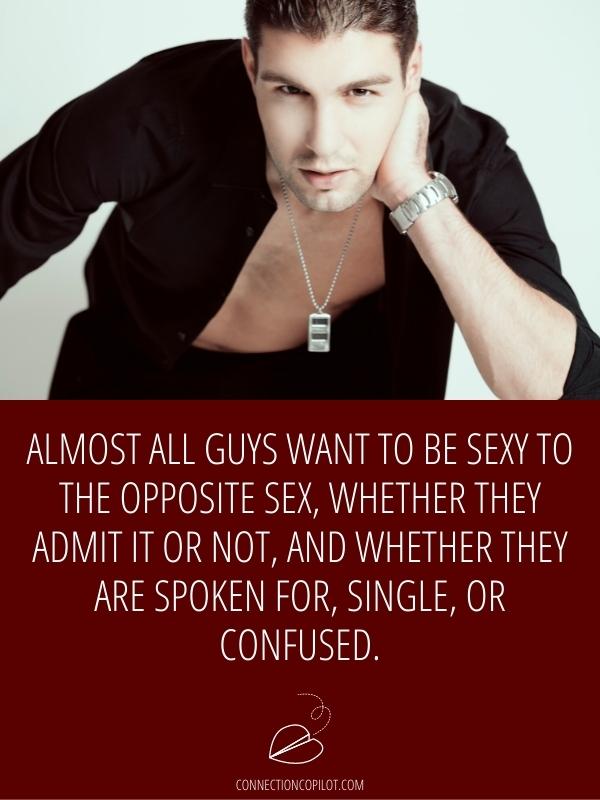 Almost all guys want to be sexy to the opposite sex, whether they admit it or not, and whether they are spoken for, single, or confused. One thing that the vast majority of guys do not want is for women to not think they are sexy. Being called cute is like a slap in the face or a bucket of ice water being dumped over your head when you’re attempting to come off as a sexy man.

Being called cute by your partner, or crush for that matter, has a funny way of making guys feel like they’re not being taken seriously. In his mind, if you took him seriously, and saw him as a strong and good-looking man, you might call him something more manly, like stud muffin or even plain old handsome. If you want a guy to think you’re blowing him off as a potential romance, just make sure to call him cute religiously.

5. They Think You’re Being Condescending

Some guys mistakes when someone calls them cute and genuinely means it, and when someone is just being condescending. That’s why, in all honesty, it’s really just better to avoid calling guys cute unless you know them well and they understand what you mean by it. Let’s face it, it’s not just guys who don’t like to feel as if their partner, or crush, is being condescending towards them. 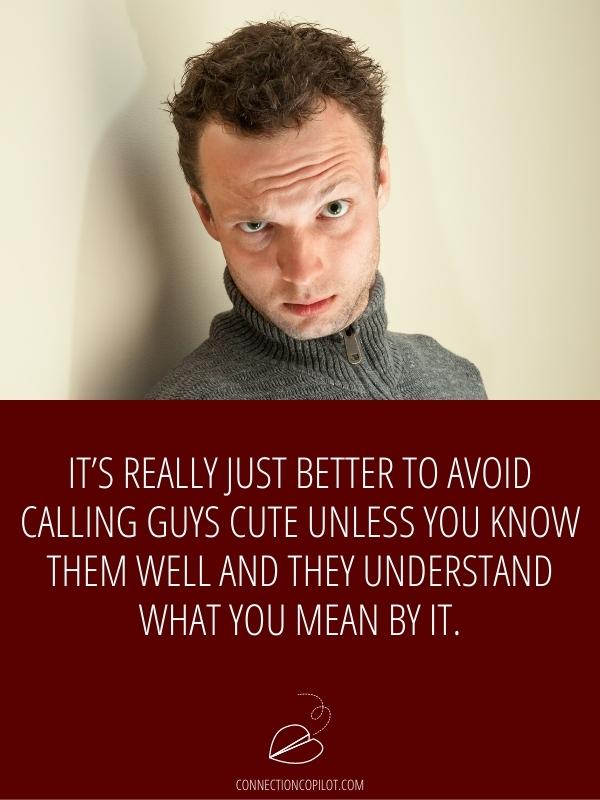 6. They Want To Be Seen As Macho, Not Cute

A lot of the time, guys simply want to be seen as macho men. The very last thing on God’s green earth that they’d ever desire to hear uttered from your pretty little lips is the word cute, directed towards them. Even more, don’t even think about telling him that any part of his private parts is cute. Use ANY word but cute for that… unless you want to see how fast you can get ghosted.

7. They Think You Are Poking Fun At Them

Some guys feel like you’re simply poking fun in their direction by calling them cute, especially if they aren’t physically cute and they know it. Even if they do find themselves cute, they may feel like your calling them cute is another way of you saying that you see their attempts at being affectionate or romantic, but feel that they fall somewhat short. In this case, they’ll feel sheepish but more than likely get over it pretty fast.

8. It Reduces Their Confidence

Constantly being called cute by someone can reduce a guy’s confidence in himself, especially in the looks department. Being called sexy, handsome, or stud, on the other hand, has the opposite effect. It makes them feel attractive, manly, and most importantly, desirable to those of the opposite sex. 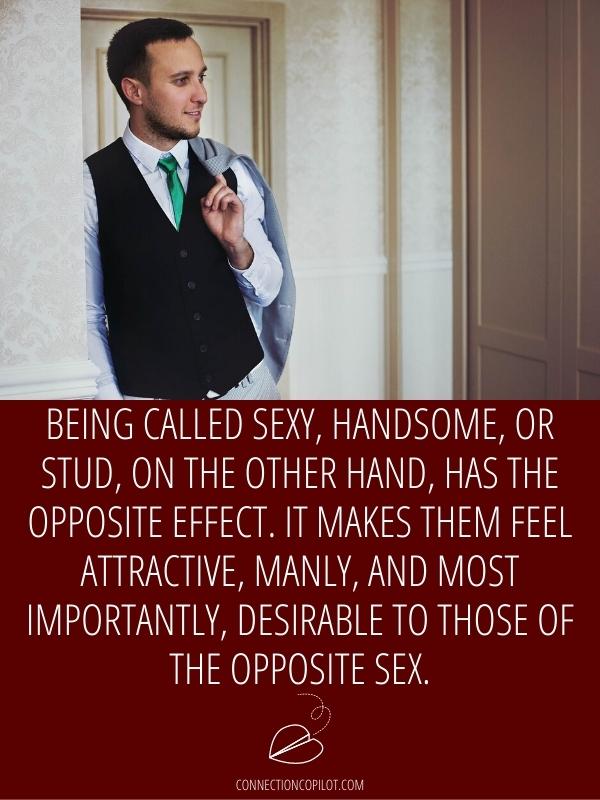 9. It Makes Them Feel Soft

The word cute isn’t a very “hard” or “edgy” term, it’s quite the opposite. That’s why some guys feel soft when you call them cute. And, this plays directly against the fact that most guys desperately want to feel as “hard” and macho as they possibly can. Calling them cute to often may cause their confidence to shrink and may even impact their feelings of attraction towards you in the long run.

If you call a guy cute more than once, there’s a higher chance that he may develop a sort of complex about it. Being called cute takes a lot of guys back to their childhoods, mentally. Hence, calling him cute regularly can make him believe that you see him as boy-like rather than as the big strong sexy man he wants you to see. 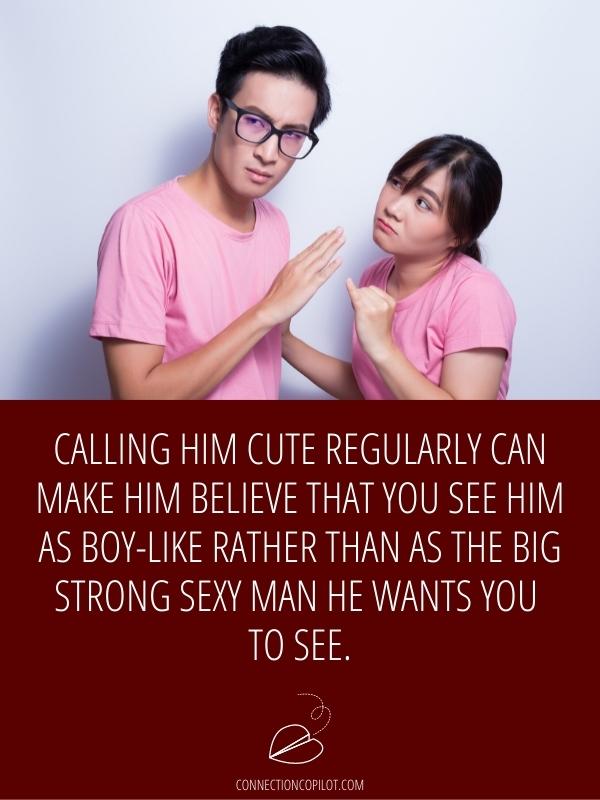 Names for a Guy Other Than Cute

There are about as many names to call guys other than cute as there are cat memes floating around the internet. The options are endless.

Here are a few of the most popular ones:

Most men enjoy it when women call them handsome (whether it’s coming from their partners or not). Being called handsome strokes a guy’s ego, and makes him feel like the opposite sex finds him attractive.

Sugar is a hit-or-miss name for calling guys. Some of them eat it right up, while others take it nearly as bad as their partners calling them babydoll, or something else that’s obviously feminine. Less guys reject “sugar” than they do “cute” though.

A vast majority of guys don’t mind being called daddy. Most guys that are called daddy by their partners take it as a sign of love, respect, and trust (as well as flirty). That said, it all depends on the guy, of course.