Beauty is in the eye of the beholder, and in the eyes of many a guy, things don’t get much more beautiful than short girls.

Read on below and discover these 21 reasons why guys like short girls so much! 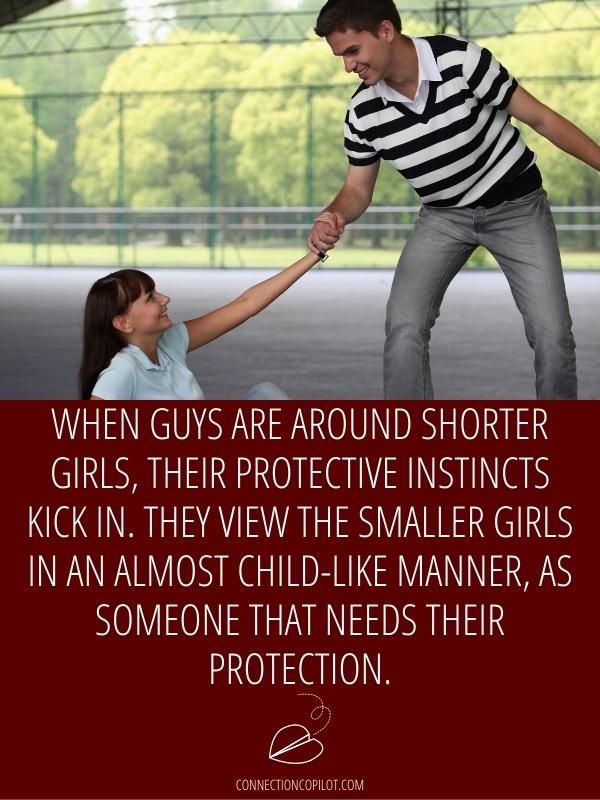 When guys are around shorter girls, their protective instincts kick in. They view the smaller girls in an almost child-like manner, as someone that needs their protection.

For many men, it is in these knights and shining armor-type scenarios they conjure in their minds where the attraction to short girls begins (it may even be subconscious).

It is no secret to society that short girls are often feistier than their leggier counterparts. That said, a lot of the time their fiery attitudes are forged while simply proving themselves to everyone around them (because of their height).

Basically, when you feel like you constantly need to prove that you’re a “big girl”, left and right, you tend to become a feisty short girl… and guys dig it! 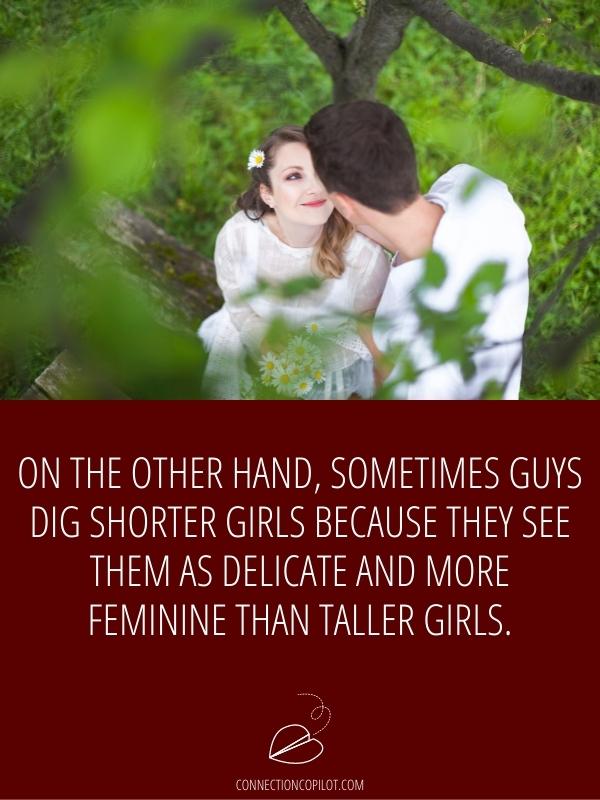 On the other hand, sometimes guys dig shorter girls because they see them as delicate and more feminine than taller girls.

When short girls dress “younger” than their age, it also goes a long way in causing guys to be even more caught up with them. Most guys are suckers for the whole school girl look (it’s probably in their DNA!).

4. Smaller Girls Are Easier to Dominate

For many guys, one of the most attractive aspects of smaller girls is that they are the easiest to dominate in the bedroom.

They can be lifted and maneuvered without breaking a sweat. In comparison to someone their own size, dominating small girls can be rather fun and exciting.

One big aspect that sometimes isn’t necessarily connected with why guys like short girls is that shorter girls don’t remind them of their moms. 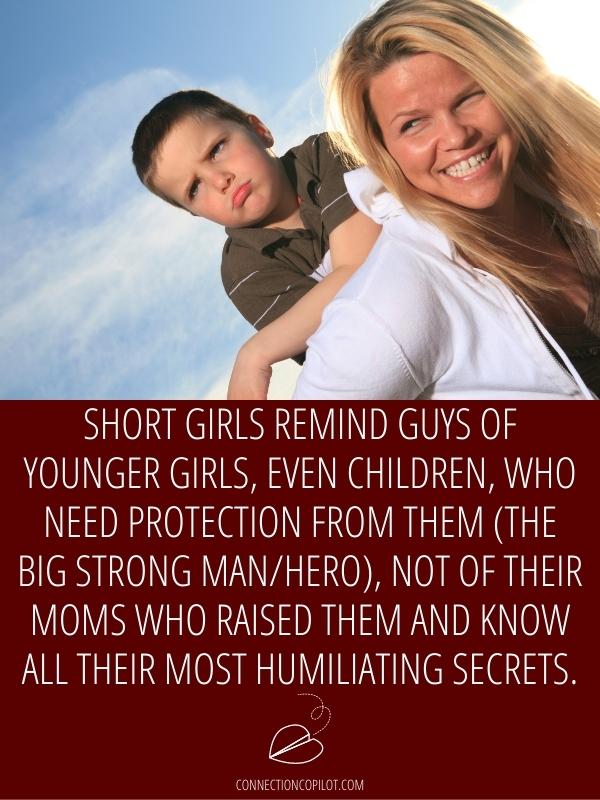 Short girls remind guys of younger girls, even children, who need protection from them (the big strong man/hero), not of their moms who raised them and know all their most humiliating secrets.

A small girl that’s quite a bit shorter than her guy more than likely makes him feel bigger and stronger.

Merely being in her presence boosts his confidence and feelings of protection and adoration towards her. Sometimes, ladies, it’s really that simple! 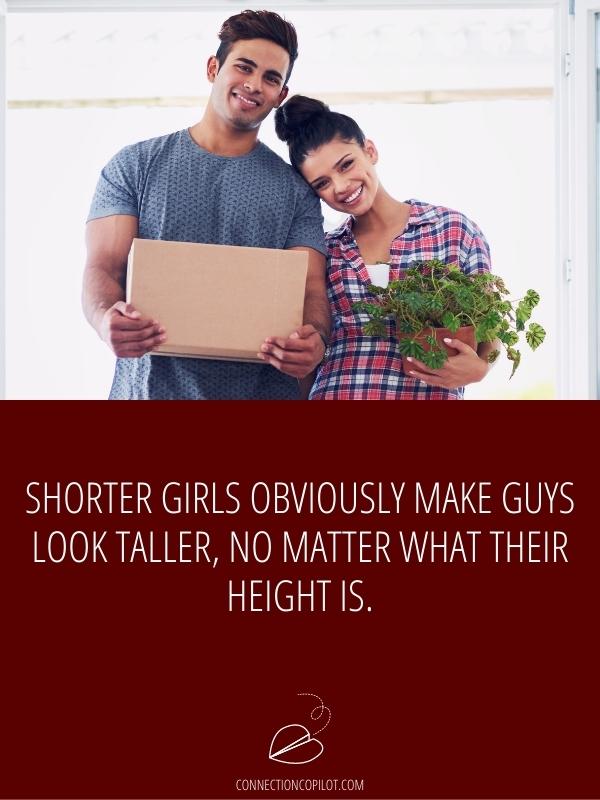 Shorter girls obviously make guys look taller, no matter what their height is.

That goes doubly for the guys who are not really that tall. If she’s 5’2’’ and he’s 5’7’’, she makes him look like he’s a 6-foot-tall professional b-ball player!

8. Cuddling is Easier with a Smaller Girl

Cuddling a teddy bear or doll is much easier than cuddling someone your own size (as strangely creepy as that may sound, it’s true!). It’s the same with smaller girls; they are just so much easier to cuddle and snuggle up with.

Coupled with the fact the small girls are typically seen as absolutely adorable, it makes for exceptional cuddling experiences. 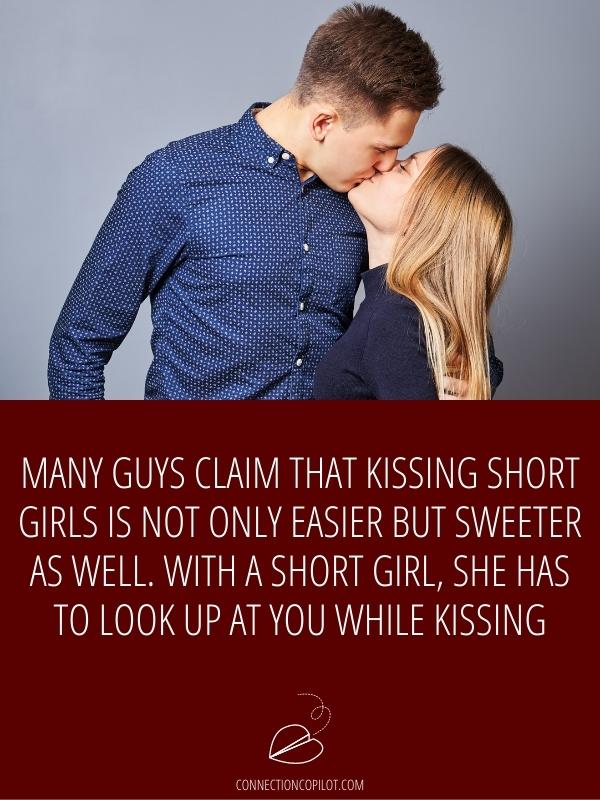 Many guys claim that kissing short girls is not only easier but sweeter as well. With a short girl, she has to look up at you while kissing, and you can lift her chin and cuddle her face or play with her hair.

You can also set her on the counter and kiss her eye-to-eye to change things up.

10. Sex is Different with Short Girls

Kissing is one thing, but sex is another story altogether. Further, sex with short girls is a whole different thing too.

Everything from the various positions that aren’t possible with taller partners, to the level of physical exertion involved, and other factors, like the ease of cuddling and kissing, make sex with smaller girls something pleasantly unique. 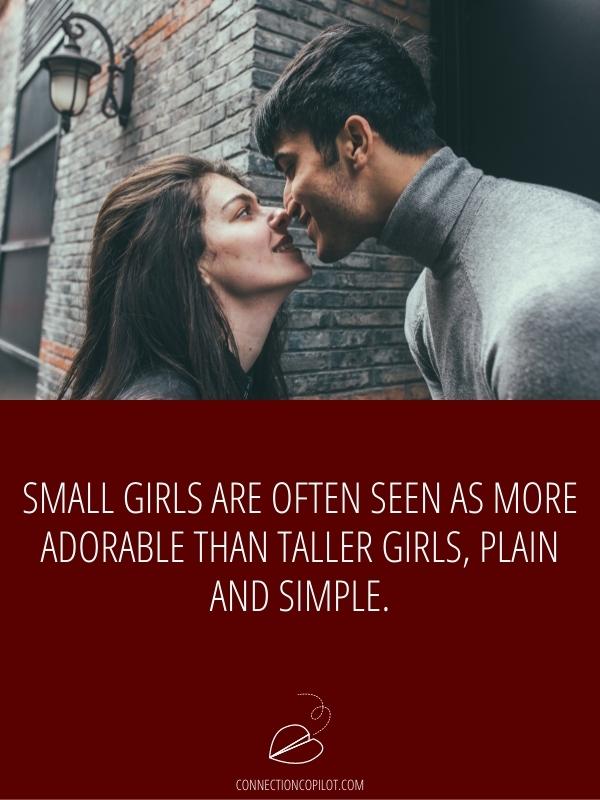 Whether you remind them of their little sister, or simply as the archetype maiden that needs a hero to protect them, you are adorable to guys that are into short girls.

Another reason that guys like short girls is that they are less intimidating than taller girls.

Whether it’s because they feel challenged by a girl who is physically as big and strong as them, or they feel uncomfortable with girls that can look them directly in the eye, nose to nose, short girls are just less intimidating.

13. Short Girls Have to Look Up to You

Speaking of guys who are intimidated by tall girls, another reason they like short girls is that said shorties have to look up, at least slightly, to look at you. 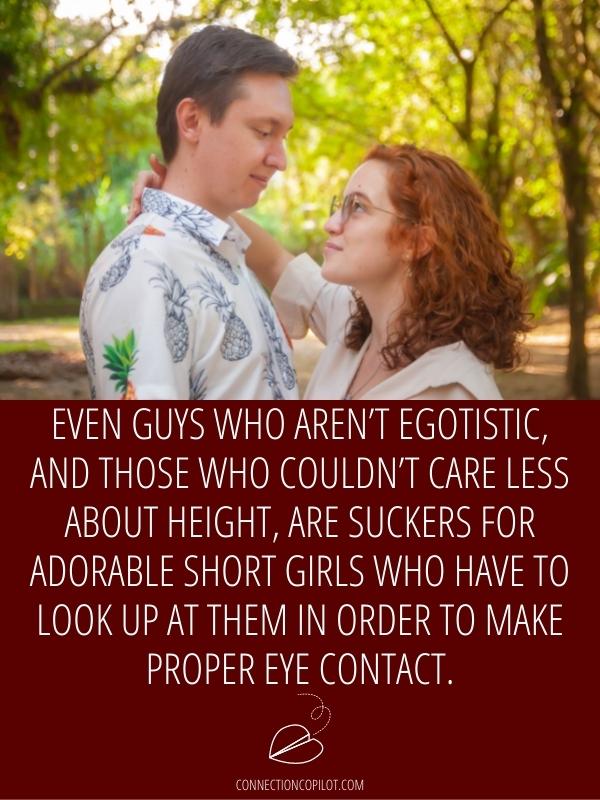 Even guys who aren’t egotistic, and those who couldn’t care less about height, are suckers for adorable short girls who have to look up at them in order to make proper eye contact.

It’s also no secret to society that many small girls have a thing for “big” and “strong” men. So, of course, if you’re a big and strong man, you’re more than likely aware of said attraction (and will take full advantage of it).

Further, once they’ve been with a small girl, chances are they develop a deeper attraction to other girls of a similar short height. 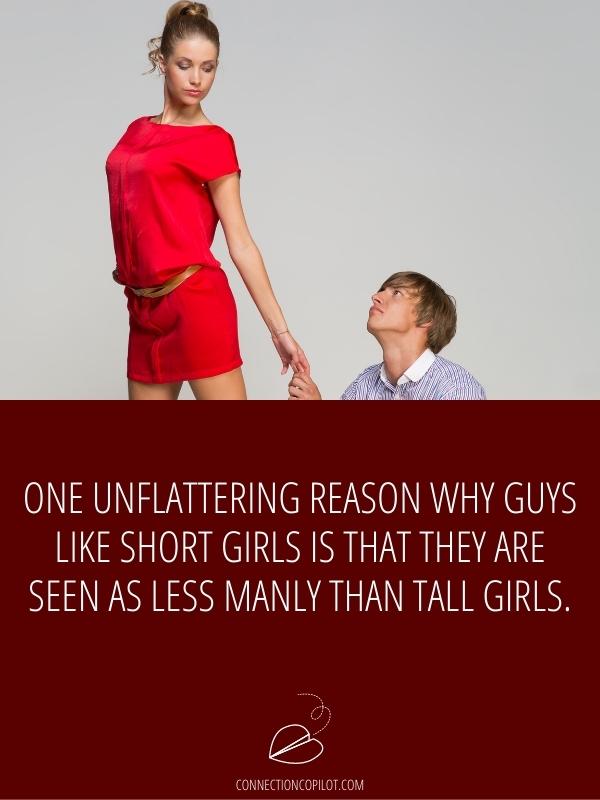 One unflattering reason why guys like short girls is that they are seen as less manly than tall girls.

Again, it isn’t to say that tall girls are ACTUALLY more manly because that just isn’t the case, but that men may be more intimidated by a woman that matches them in height and strength than shorter less powerful looking girls.

When you’re out on the town with a short girl that’s wearing high heels, or boots, the temporarily added few inches to her height doesn’t make the guy look short.

It doesn’t seem like such a big deal, but some guys are really sensitive about how tall they look compared to their partners. 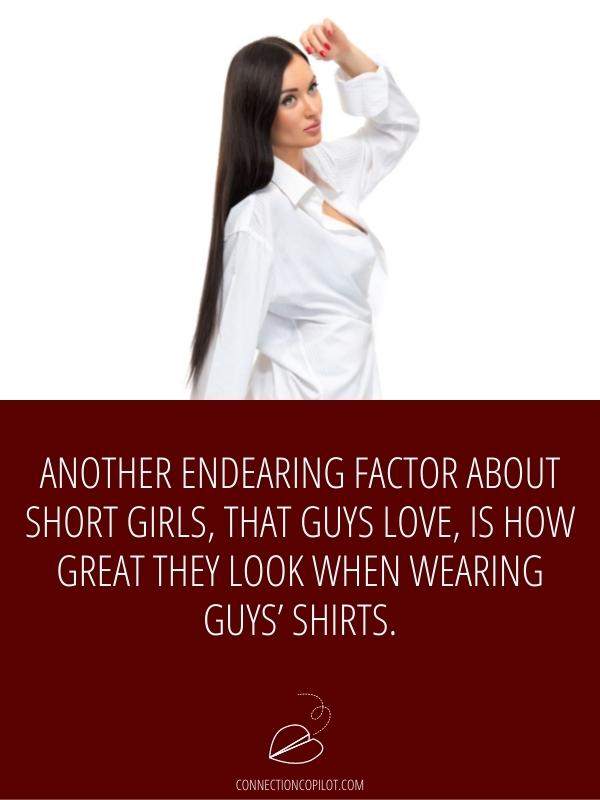 Another endearing factor about short girls, that guys love, is how great they look when wearing guys’ shirts.

After sex or a long day at work, when you’re just chilling, and all she’s wearing is your shirt… and it’s big enough to reach the knees… it’s just so sexy to guys that they can’t help but love it.

18. Short Girls Give the Best Hugs

Another poorly kept secret about short girls is that they give the most amazing hugs.

Whether it’s their lower than average centers of gravity, or that their arms barely reach around you, there is just nothing quite like a big hug from a small girl.

19. Short Girls May Have More Curves 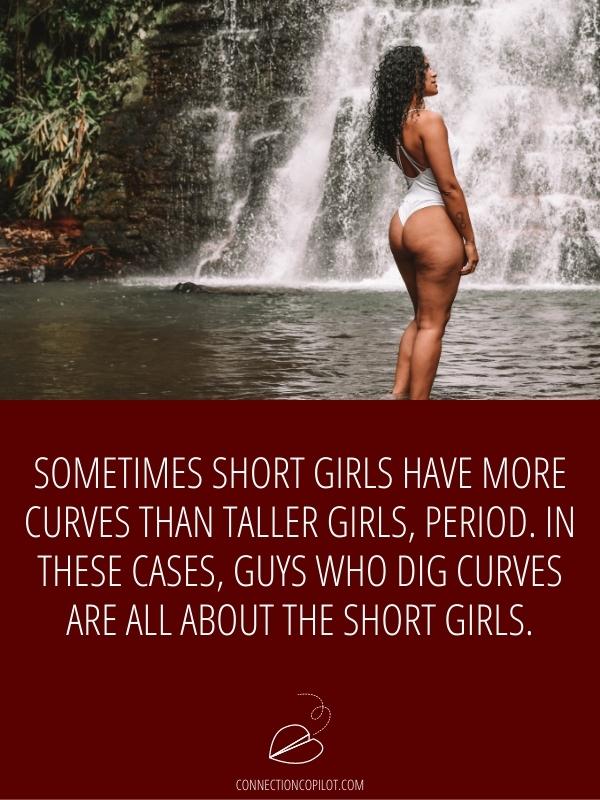 Sometimes short girls have more curves than taller girls, period. In these cases, guys who dig curves are all about the short girls.

Not only do short girls have more curves, but they are cute little girls that need protecting, are easier to maneuver in the bedroom, and so much more.

Men are bred to be hunters and protectors (which equates to them being uncomfortable around bigger and more dangerous animals – like tall women). It’s nothing personal, just countless centuries of men being men.

21. Short Girls Are Underdogs and Rebels

Short girls tend to be viewed as underdogs and rebels because the odds are often against them.

Whether it’s on the ball court, or at the workplace, certain stuff is trickier for short girls to pull off (like slam-dunking a b-ball, or reaching a box on the top shelves of the supply closet). 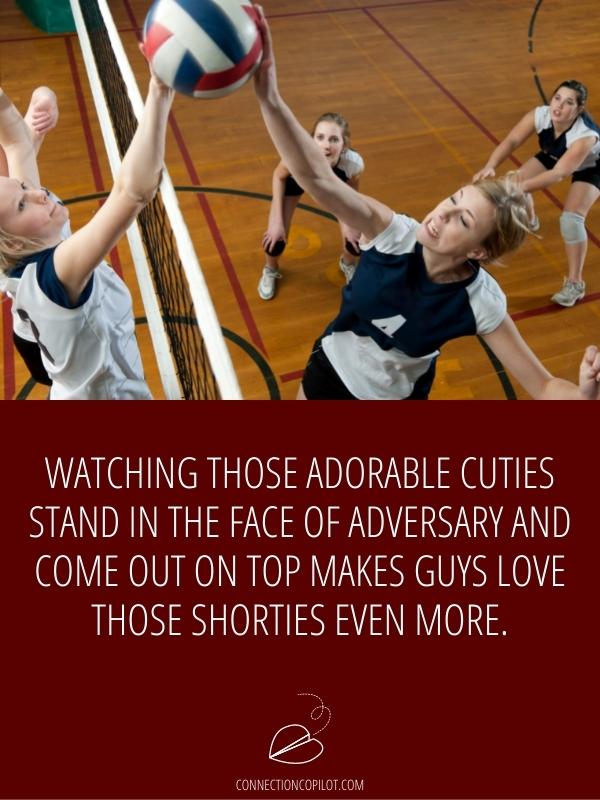 Watching those adorable cuties stand in the face of adversary and come out on top makes guys love those shorties even more.

Do men care about girls height?

When it comes to what men and women like in their partners, nothing is black and white. That said, surveys suggest men prefer girls who are at least a few inches shorter than them. Women prefer men who are 8 inches taller (or more) than them.

What is the most attractive height for a girl?

Many guys prefer girls who are in the 5-feet to 5-feet 5-inch range. However, generally speaking, most guys are happy if they are at least a few inches taller than the woman they are dating.

Short shorts, skirts, and dresses with high waistlines help make your legs look longer. For short girls, these wardrobe staples are a must if you want to make those legs look longer than they are!