You’ve recently clued in on the fact that guys seem to have a thing for mean girls and are having a hard time understanding why.

There is no singular reason guys like mean girls, but here is a full list of them! 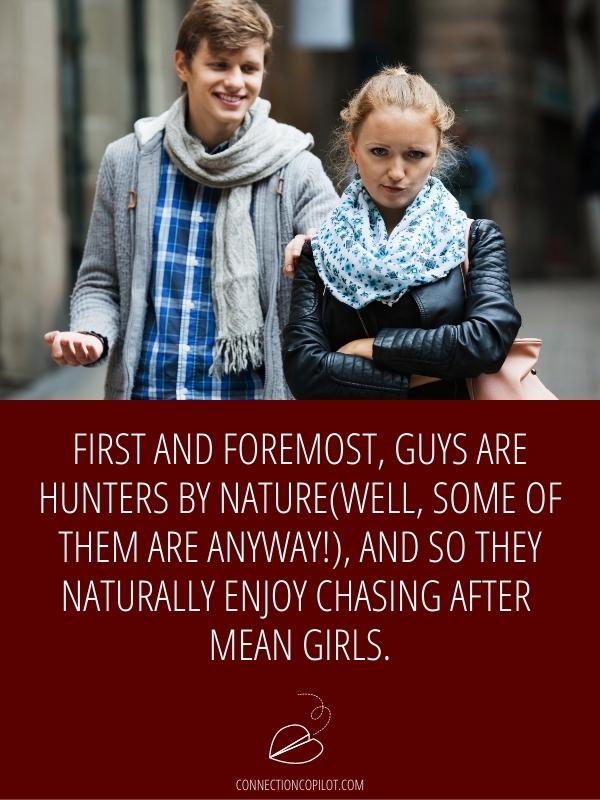 First and foremost, guys are hunters by nature(well, some of them are anyway!), and so they naturally enjoy chasing after mean girls. Everyone knows that lots of girls get off on playing hard to get, the harder you try the more they enjoy themselves. Likewise, it isn’t a secret that just as many guys like playing hardball too. So, when a hard-headed guy meets mean girl, the results may seem to be a match made in heaven(or hell) scenario.

Speaking of the hunt, even once he’s hooked up with a mean girl, the excitement doesn’t need to end there. Mean girls always seem to be down for adventures, even the reckless ill-planned and destined to derail lives sort of adventures. The best part is that mean girls often don’t seem to care about the price of excitement or adventure either, which many guys like.

3. Mean Girls Tend to Dress Sexier Than Other Girls 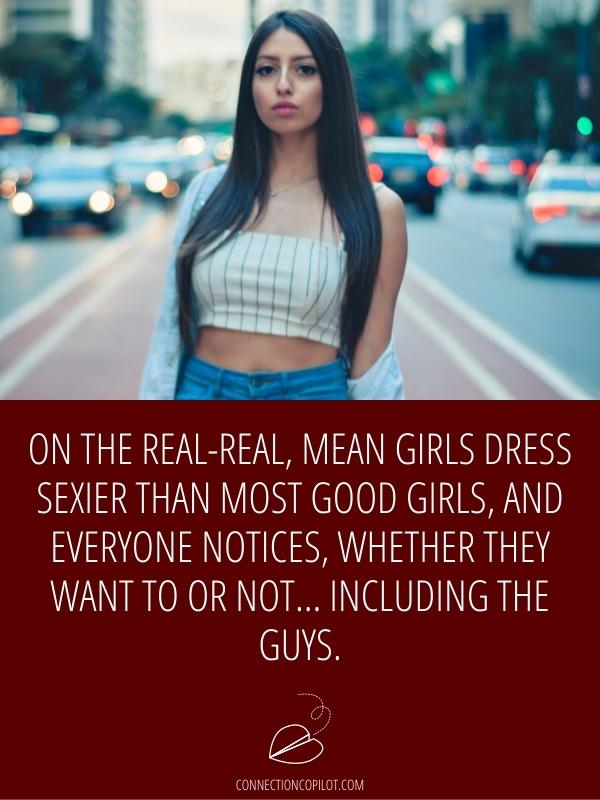 On the real-real, mean girls dress sexier than most good girls, and everyone notices, whether they want to or not… including the guys. It doesn’t take much to figure out why guys might be interested in a sexy-dressed girl, even if they have an attitude. If the girl is dressed provocatively and has an equal attitude, the guy may be attracted rather quickly.

Mean girls don’t just dress sexy and take pleasure in teasing guys, they typically make excellent partners for sexual intercourse. Mean girls are much more likely to put on a performance in the bedroom and actually enjoy it than say, the church-going type. However, looks can be deceiving, and obviously not all mean girls are “all that” in the bedroom.

5. Her Attitude is More Confident and Defiant Than Most Girls 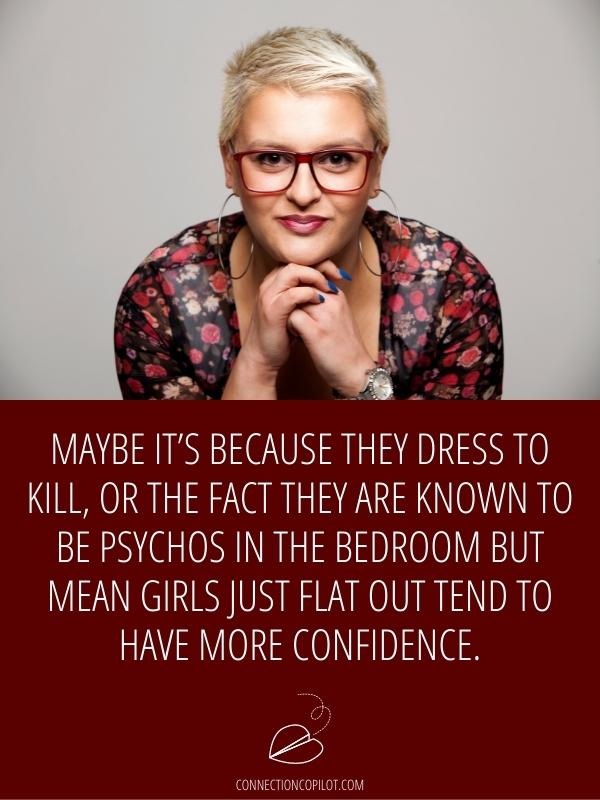 Maybe it’s because they dress to kill, or the fact they are known to be psychos in the bedroom but mean girls just flat out tend to have more confidence. Not only are they more confident though, but they are also more defiant as well, a trait that many-a guy loves even if they won’t admit it. Whether she’s disobeying authority in general, or specifically her family, he’s likely to see her as a rebel. The fact that she’s willing to stand up for herself and what she believes(right or wrong), may also send him over to the dark side as well.

6. Good Girls Are Too Boring for a Lot of Guys

Not to add salt to the wound(sorry good girls), but many guys just really get bored with good girls rather quickly. It isn’t that you need to be a total floozy or dress like a go-go dancer to keep a guy’s attention, but means girls are just so much more interesting to be around… and guys dig it.

7. Her Philosophy is Intriguing Compared to “Good” Girls

Compared to the mindset of a down-to-earth good girl, a mean girl’s life philosophy/worldview may be much more intriguing to guys. They seem to be more aligned with a guy’s worldview. Further, mean girls tend to be more aggressive and assertive in attaining their life goals as well, which guys notice and admire. 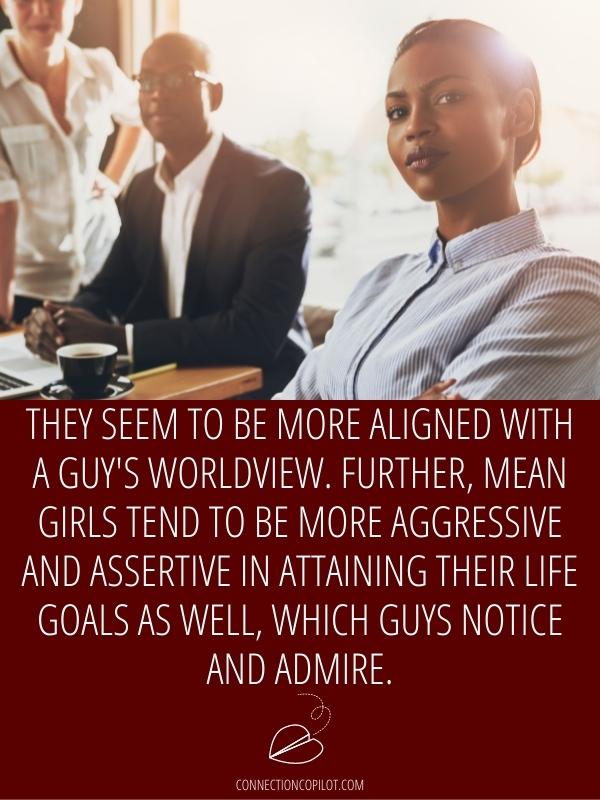 8. Mean Gives Are Trouble, and Men Love It

Many guys seem to be trouble magnets in all that they do, even in dating and family-building. They just can’t seem to get enough trouble, and in the case of mean girls, it may well be one of the main factors that keep them coming back for more. Guys. Love. Trouble. That’s really what it boils down to in these cases. The worse she acts up, and the more trouble that arises because of her attitude and actions, the more she’s attractive.

9. Guys Prefer Girls Who Are Complicated

Speaking of trouble, great sex, intrigue, adventure, and all that jazz, mean girls can come off as pretty dang complicated to guys. But, that’s great, because that’s part of the reason they love mean girls so much: they love the drama and complications that she brings into their otherwise boring life. Let’s face it, it’s lame but it’s true, people’s lives can become very dull and boring. Mean girls spice things up for bored guys. 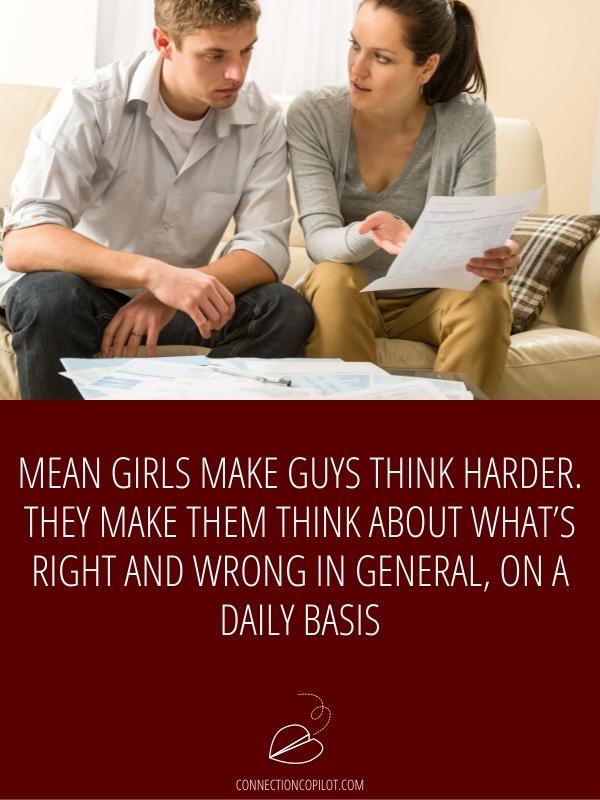 Believe it or not, many guys feel a deeper range of emotions when dating or building a family with a mean girl. Why is that you might ask? The answer is simple: mean girls make guys think harder. They make them think about what’s right and wrong in general, on a daily basis, for starters. Further, they are forced to think about other people’s feelings, and of course about their own deep and personal feelings about said mean girl and their relationship.

Men are attracted to mean/bad girls for various reasons, including excitement, adventure, lust, great sex, deep feelings, danger, and much more. Mean girls come off as more experienced, goal-driven, and fun to be around than boring good girls.

There is no proof that mean girls are smarter than good girls, or vice versa. The opposite could be posed, seeing as mean girls are pretty, well, mean and selfish. That said, mean girls may come off as wittier and more outspoken to guys than most good girls.

What Do Mean Girls Have That Good Girls Don’t?

Means girls don’t necessarily have anything good girls don’t, aside from bad manners. But, they do appear to have more confidence, experience, and humor. They also come off as if they are more ambitious and goal-oriented than good girls.