It’s no little secret that guys adore long hair on girls, but have you ever stopped to think about why it is that they like it so much?

Read on below and explore 10 of the top reasons why guys like long hair on girls!

Why Do Guys Like Long Hair So Much on a Girl?

Beauty is in the eye of the beholder, and so it is with guys who like long hair on girls.

There is an endless amount of reasons why one might prefer long hair on a girl rather than short hair.

Here are 10 of the very top reasons: 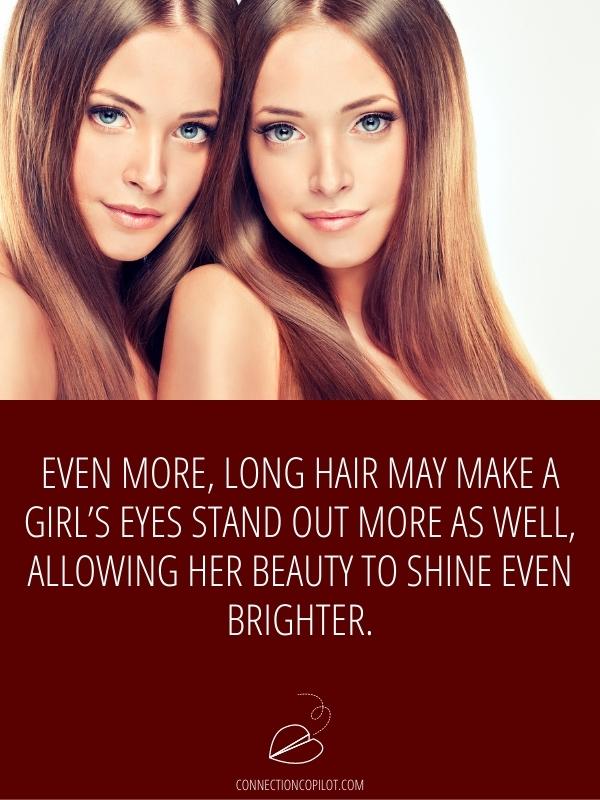 Long hair has long been considered a beauty enhancement of sorts.

It is considered as such, in part, because you can do so much with it that just isn’t possible with short hair.

Even more, long hair may make a girl’s eyes stand out more as well, allowing her beauty to shine even brighter.

Speaking of beauty enhancement, nothing is as beautiful as pure feminism.

That said, long hair is the poster child of the feminine energy/spirit.

In many cases, it’s that really that simple too: guys dig long hair because it makes girls seem more feminine and innocent than girls with short or medium-length hair. 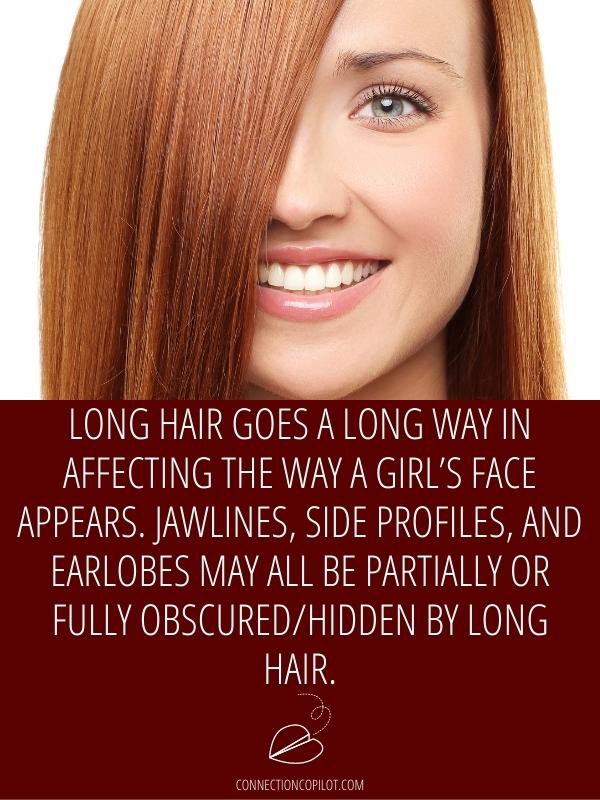 Long hair goes a long way in affecting the way a girl’s face appears. Jawlines, side profiles, and earlobes may all be partially or fully obscured/hidden by long hair.

Now, no one’s saying that guys want you to hide your face, and that’s why they like the long hair.

But, having hair long enough for it to change your facial features depending on how you style it does give you a bit of intrigue.

That doesn’t mean men aren’t attracted to women with short hair… just that the ones with long hair catch and hold their attention much more easily. 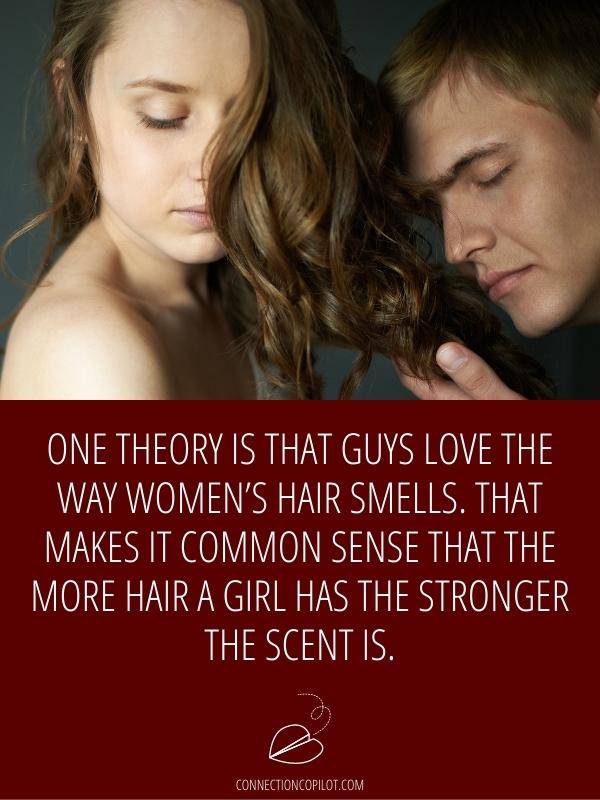 One theory is that guys love the way women’s hair smells. That makes it common sense that the more hair a girl has the stronger the scent is.

The secret is to know what scent he likes and make him crave smelling it in your hair, up close and personal.

6. It’s Arousing to Play With

Long hair is arousing to play with, which is no secret. And, guess what? Guys enjoy running their fingers through a girl’s long silky locks more than you might guess.

On the flip side, girls can also use their hair to play with him, which is likely even more arousing for him. 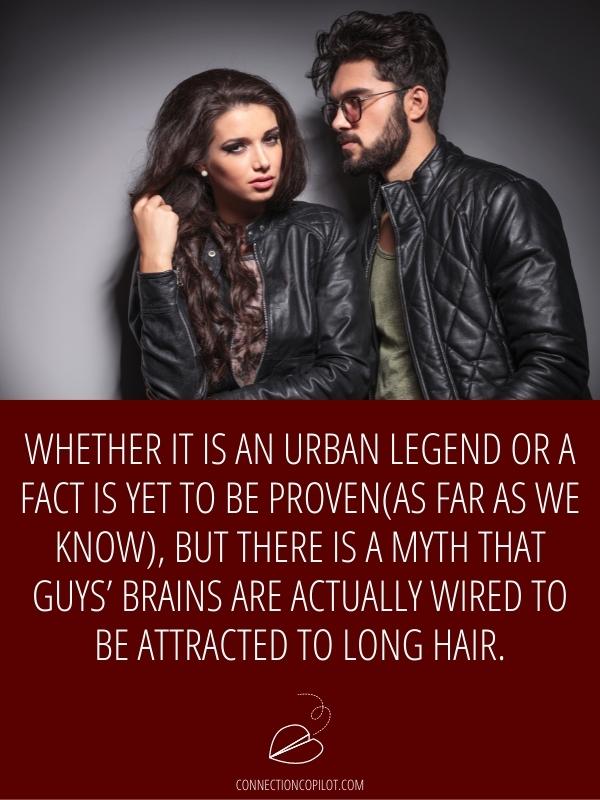 Whether it is an urban legend or a fact is yet to be proven(as far as we know), but there is a myth that guys’ brains are actually wired to be attracted to long hair.

We can’t comment much on this possibility, other than nothing how much the evidence seems to point towards this myth possibly being true.

8. Puts the Focus on Her Eyes

Long hair may also help put the focus of his immediate attention directly on her eyes, instead of her jawline, neck, ears, or profile.

For women who lack confidence in their facial features, this look is critical as it makes you feel good, and noticed, which allows you to more easily command the situation.

Direct eye contact, and a lack of other facial features for him to look at, and his focus will be all yours.

9. Long Hair Can be Styled All Sorts of Ways 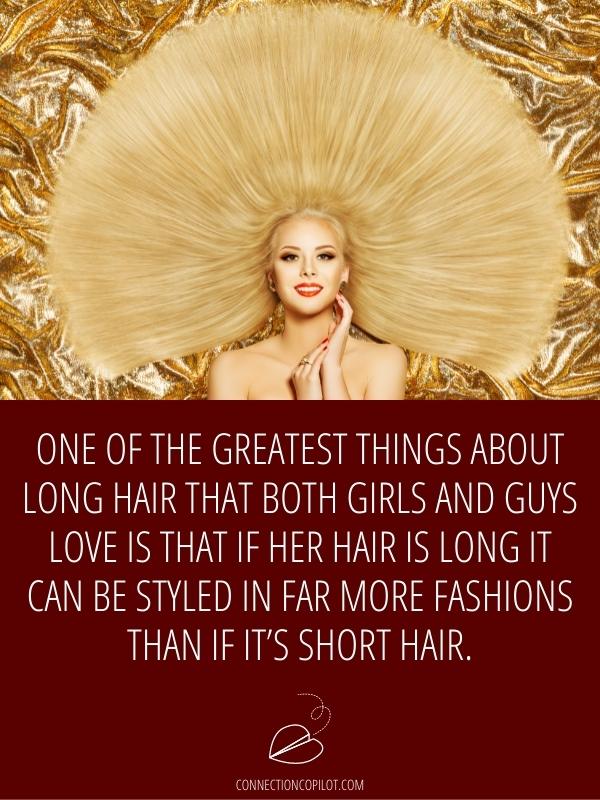 One of the greatest things about long hair that both girls and guys love is that if her hair is long it can be styled in far more fashions than if it’s short hair.

From princess lea braids to pigtails, or simply letting it all down, with long hair there’s a style for every day and every occasion.

From the classic school girl hairstyle to countless cosplay character hairstyles, the fun literally never ends with long hair. You can even take turns deciding what hairstyle/outfit will be next, adding to the excitement of it all.

And, for girls with short hair… don’t fret! Invest in a wig or two and dress up as one of his favorite anime, comic book, or video game characters, and he’ll love it!

What Is The Most Attractive Hair Length For Women?

According to a recent survey from thestudentroom, 65-percent of guys claimed they find long hair to the shoulders, or longer, the most attractive hair length for women. Further, 22-percent said it depends on the woman’s facial features, and 2.5-percent said they weren’t bothered. Less than 10-percent of the men questioned claimed to prefer medium or short hair.

How Important Is a Woman’s Hair to a Man?

From the standpoint of a guy, extra super long hair is not merely good, it’s amazing. A large majority of men claim that hair past shoulder length is more sexually appealing than any other hair length. Some of them also prefer super long hair over large breasts or butts, believe it or not!