Guys can be complicated. For example, how can they be so sweet and into you and then act completely different when they’re in front of their guy friends?

Read on below and discover 11 reasons why guys act tough in front of their friends and how to respond to it!

Why Do Guys Act Tough in Front of Their Friends

It’s true, guys can be totally into you one minute and then act differently in front of their friends.

Below, we go over the top reasons it happens as well as provide tips for how you can respond to it:

1. He is Desperate to be Accepted 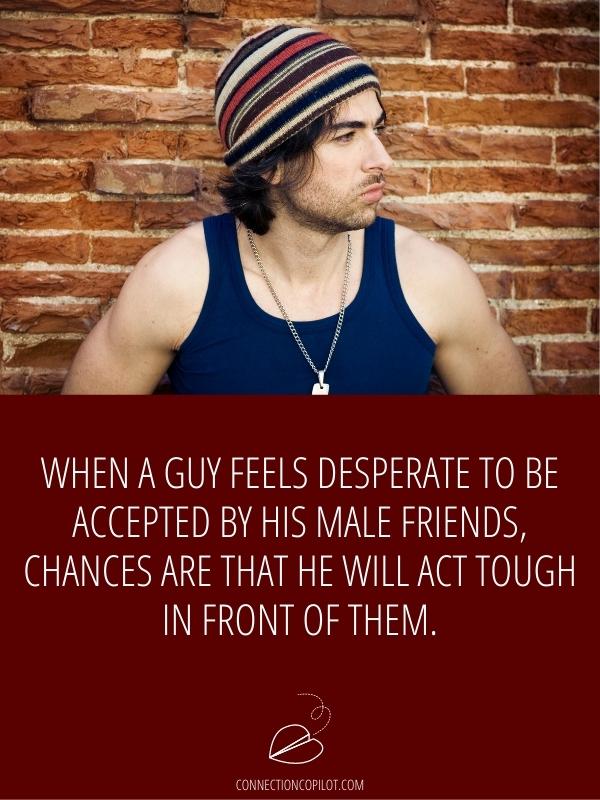 When a guy feels desperate to be accepted by his male friends, chances are that he will act tough in front of them.

Whether he thinks it’s what they want to see or expect out of him, he’ll act tough while they are around and turn back into a teddy bear the minute they’re gone.

Guys who are confident in themselves and know their guy friends respect them aren’t as likely to transform as guys who’re still trying to prove something.

2. His Comfort Level is Higher

Guys who don’t need their friends’ approval, but feel quite comfortable in their presence may also act tough.

It isn’t because they have something to prove though, it’s more an acquired/practiced behavior than anything else.

In these cases, you should bring it up to him afterward. It’s great he’s comfortable, but it doesn’t need to cause you discomfort.

3. He is Actually being Himself

Sometimes guys reveal their true nature only when surrounded by people they trust.

In this case, when your guy starts acting tough, it may actually be that you’re seeing his true personality. 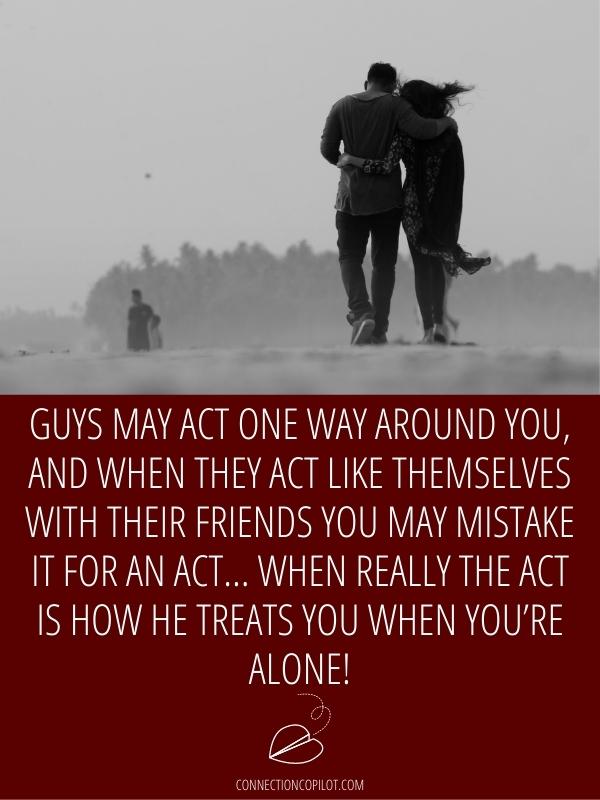 Guys may act one way around you, and when they act like themselves with their friends you may mistake it for an act… when really the act is how he treats you when you’re alone!

4. He is Venting in Front of Friends

Depending on how often it happens, your guy could be acting tough in front of his friends just to vent.

When life gets stressful and the guys get together, it’s a time for letting off steam and reducing stress.

Try not to take it personally, unless he is rude to you while acting tough with the boys. 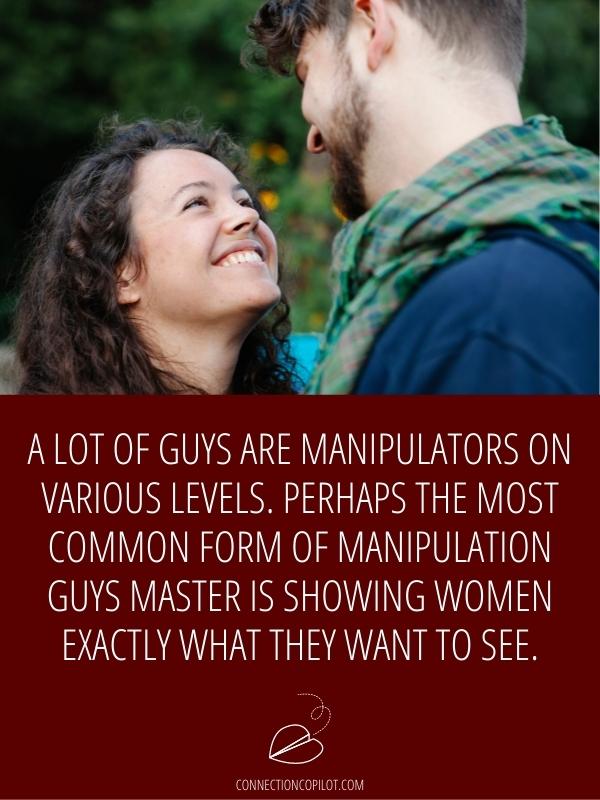 A lot of guys are manipulators on various levels. Perhaps the most common form of manipulation guys master is showing women exactly what they want to see.

So, when you’re hanging out with his friends, and he is being a tough guy, consider the fact that he could simply be tired of pretending to be someone he’s not.

Take these moments in and reflect on them. Is your guy really who you think he is, to begin with? Probably not!

Another major reason that guys act tough in front of their friends is that they are out for revenge.

Whether you’ve wronged them recently, had an argument, or they’ve simply perceived something in an unflattering light, they might just try to get even with you the next time they are in front of people they are comfortable with.

Look out for guys like this because they might not know when enough is enough, and might just push their revenge moment a little bit too far.

7. He is Just Messing Around 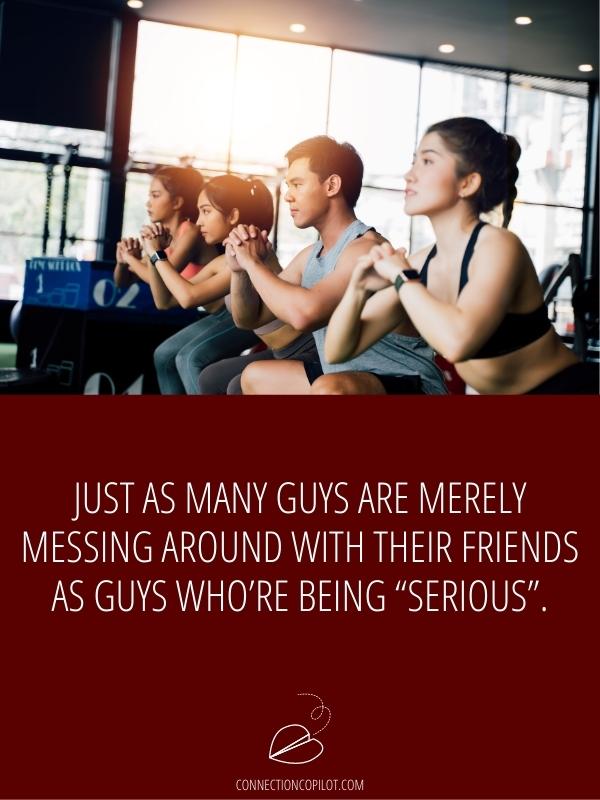 Just as many guys are merely messing around with their friends as guys who’re being “serious”.

If your guy likes to cut loose and have fun, what better time to do so than when he’s with his friends?

Hopefully it doesn’t include being rude to you while acting like a tough guy… because that’s not really fun for you at all!

8. He is Showing Strength by Bullying You

Some guys feel like bullying someone is a show of strength.

Unfortunately that someone could be you, simply because they know a lot about you, you’re a female, and in their mind, you’re an easy mark.

In these cases, you should be considering dropping him like a bad habit on the spot.

9. He Turns Into a Little Boy Again

As they say, inside of every full-grown man is a little boy just dying to get out and raise a bit of hell. 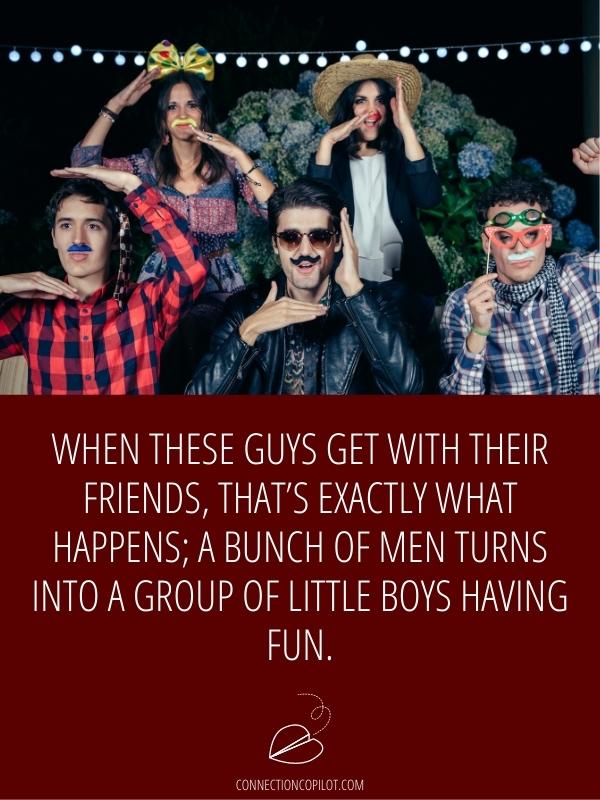 When these guys get with their friends, that’s exactly what happens; a bunch of men turns into a group of little boys having fun.

Just make sure that in all their acting like tough guys that they don’t trample on you.

10. He Doesn’t Care Much About You

If he’s acting like a tough guy/jerk to you in front of his friends, for whatever reason, he may not really care about you or your feelings much.

Anyone who can treat you well while alone, but talks badly about/to you in front of his friends is not worth your time and investment.

There’s nothing you can do to make a guy care about you if he just doesn’t want to/isn’t ready to.

11. He Wants You to Respect Him 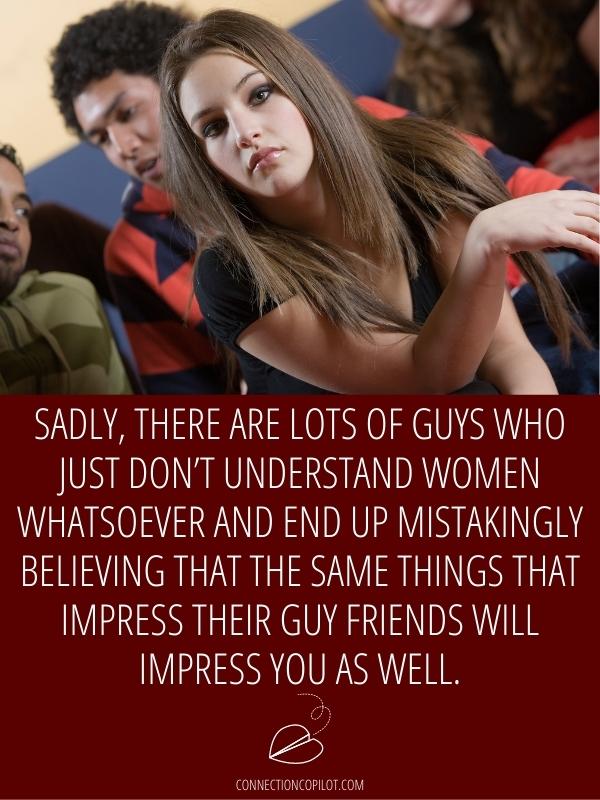 Sadly, there are lots of guys who just don’t understand women whatsoever and end up mistakingly believing that the same things that impress their guy friends will impress you as well.

In these cases, when he starts acting all tough in front of people, he’s really trying to get you to look up to him and respect him as a masculine male figure.

It’s up to you whether you laugh, cry, leave him, or love him even more for it!

How To Respond When a Guy is Acting Macho or Tough

There is no perfect way to respond when guys start acting all macho/tough guy in front of their friends.

However, these tips may point you in the right direction:

Why do some men try to act tough?

There is no limit to the reasons men may try to act tough, especially in front of their friends. Sometimes they think other guys will be impressed by their manliness, other times they are trying to impress you. Yet, sometimes, it’s just who they actually are.

Why does he treat me differently in front of his friends?

Guys want to fit in with their male friends, and if it means treating you differently then that’s what’s going to happen. Most of the time it is harmless, but if the behavior is extreme, or hurts your feelings, you should talk to him about it openly and honestly.

What are the signs of a weak man?

A weak man has many signs, including not being able to keep his word, showing no sympathy/empathy, not being supportive, acting competitive, and generally being abusive with words or violence. Weak men are also extremely competitive with anyone in your life that cares about you.