Most guys aren’t always the serious type, while some guys seem serious all the time. A lot of the time it just depends on their environment and who’s around.

But, why is it that they act serious around you?

Read on below and explore these 11 reasons guys act serious around you!

Why Do Guys Act Serious Around Me?

1. He’s Seriously Attracted to You 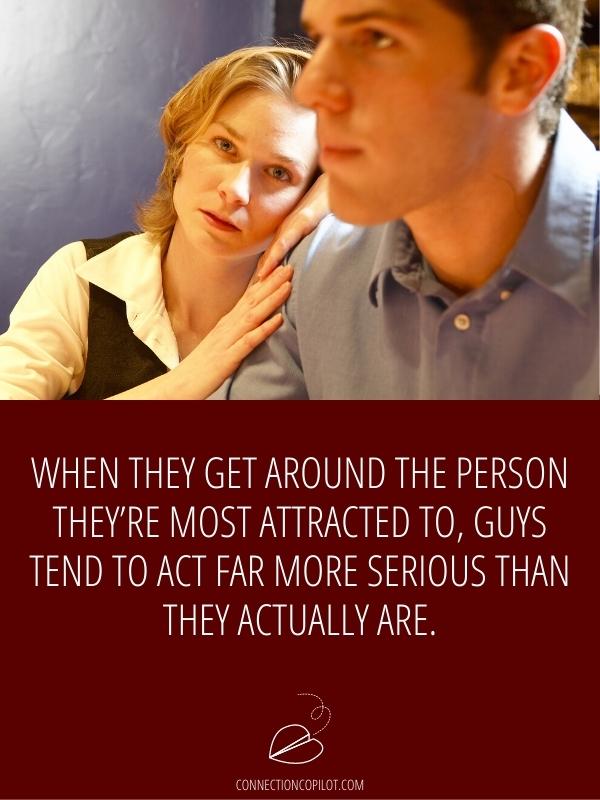 Believe it or not, a common answer from guys when asked why they act so serious around certain gals is that they are scared. Yes, you read that right: guys admitted they get scared around the opposite sex. So, the next time a guy is being too serious, keep in mind he just might be afraid of you! 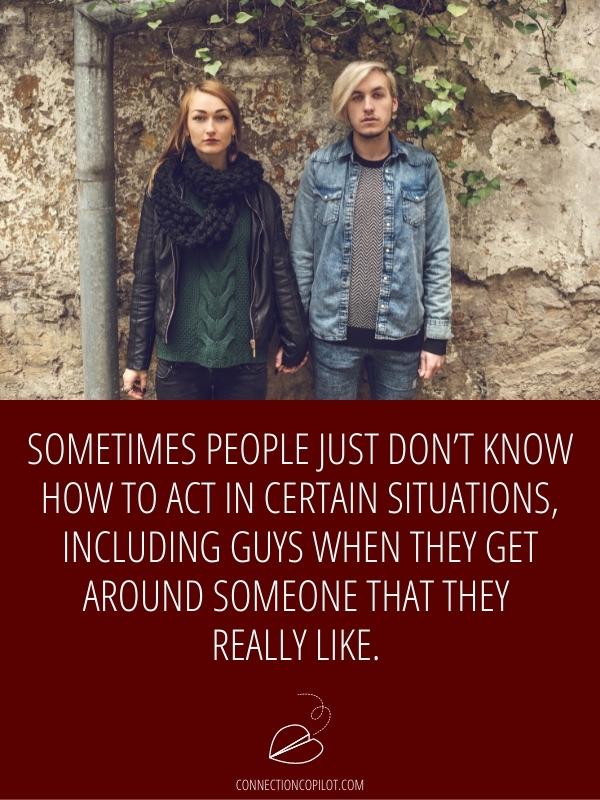 Sometimes people just don’t know how to act in certain situations, including guys when they get around someone that they really like. When a guy doesn’t know how to act and doesn’t want to seem foolish to you, they are likely to simply appear to be as serious and alert as possible. The good thing is that once they calm down a bit, they’ll more than likely get back to acting normal.

Another hard reason to believe is that sometimes guys think you are way cooler than they are. In these cases, the guy acts super serious in an attempt to show you how mature and cool they are. The cooler they think you are, the harder they’ll try to appear to “get” you and everything that you talk about.

Similar to number 4, the 5th reason on our list for why guys act serious around you is when they think you’re smarter than they are. The more intelligent they believe you to be, the more serious they may act. Their main concern is dual: not to look like a fool in front of a smart woman they are attracted to, and to hopefully raise your opinion/perception of their own “smartness”. 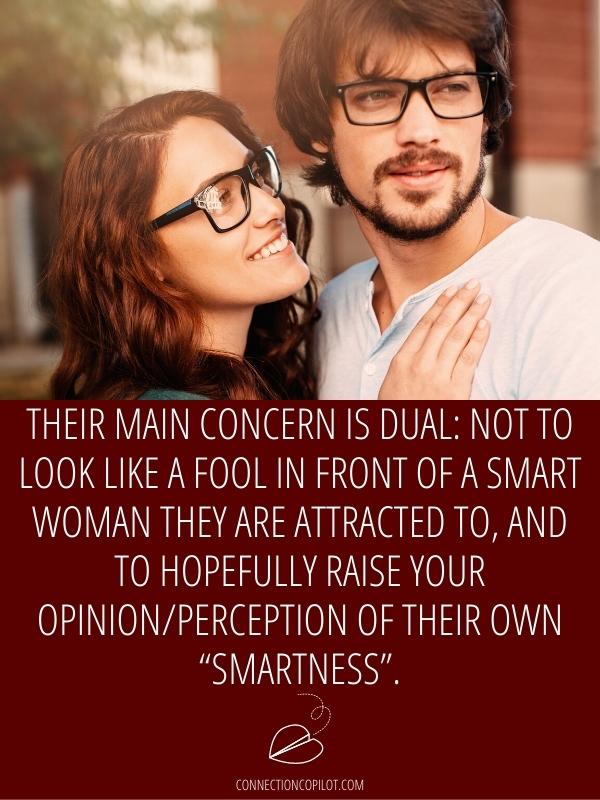 There are also guys who can’t help but act more serious than they really are when they get around their crush because they are super shy. The better they get to know you, the less serious they will try to act all of the time. But, until then, you will need to put up with a super serious version of the said guy. The best way forward is to help him feel accepted and comfortable around you.

7. He Thinks You’re Dating Someone 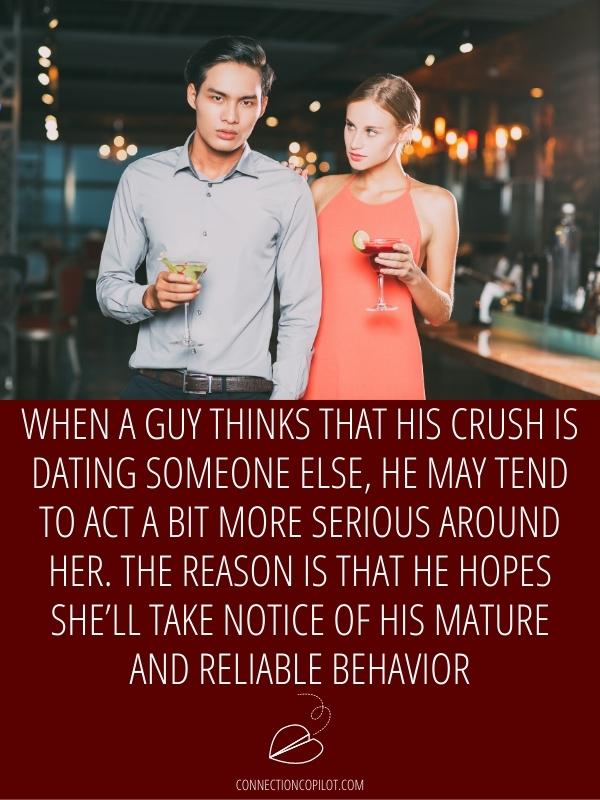 When a guy thinks that his crush is dating someone else, he may tend to act a bit more serious around her. The reason is that he hopes she’ll take notice of his mature and reliable behavior and compare it to her current partner. The longer he believes you’re in a relationship, the longer he’ll hide his truest self and show you a guy that is far more serious.

8. He’s Dating Someone Else

On the flip side of number 7 on our list of the reasons guys act serious around you is that the guy is actually dating someone. If a guy is seeing someone else but is still highly interested in a relationship with you, he could get a little more serious whenever you’re around. Even his friends and family will notice the changes in his behavior.

9. He’s Not Attracted to You 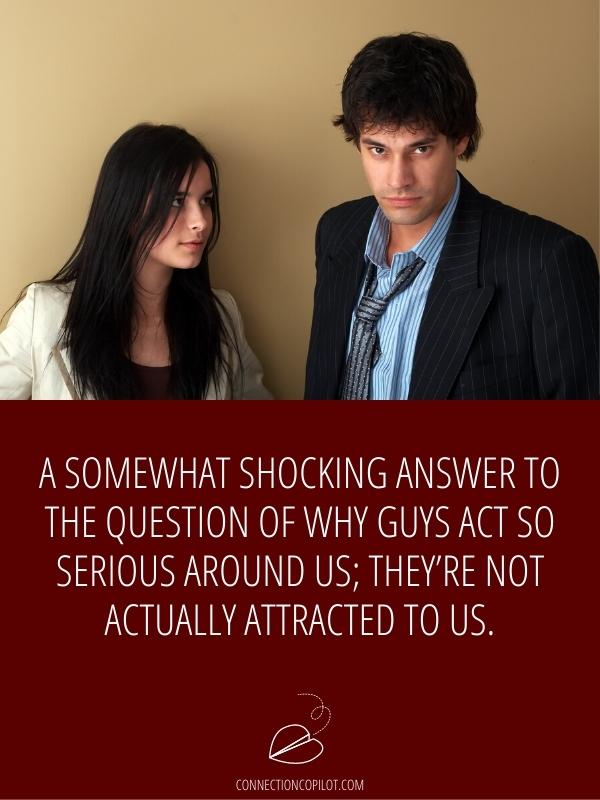 A somewhat shocking answer to the question of why guys act so serious around us; they’re not actually attracted to us. Or, at least not as attracted to you as you thought they were! In these cases, it may not be that they are pretending to be serious so much as trying to give you signals without hurting your feelings.

The absolute opposite of number 9 on our list is when a guy is super attracted to you and wants you to want him an equal amount. The more he wants you to want him just as much, the more serious he may act around you. If he doesn’t feel like things are going the way he’d prefer them to, he may eventually begin acting mean, hot and cold, or even ghost you. 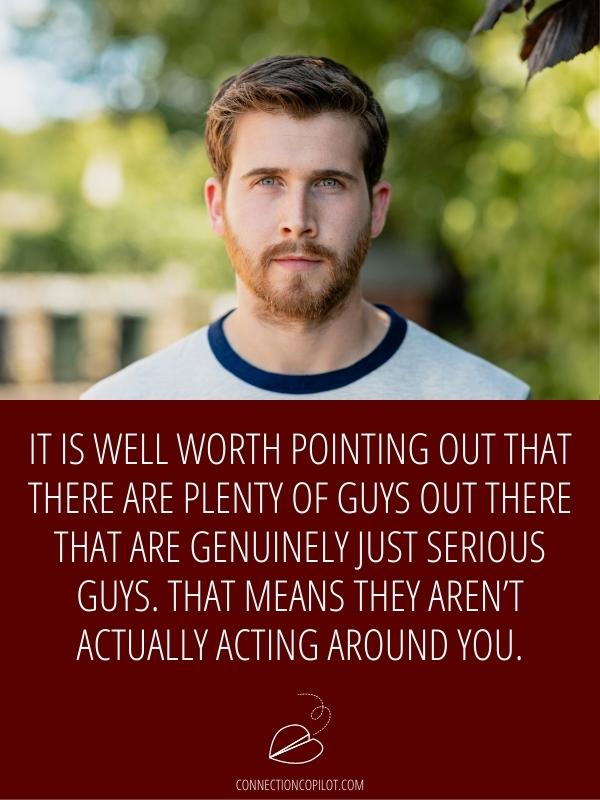 Last but not least, it is well worth pointing out that there are plenty of guys out there that are genuinely just serious guys. That means they aren’t actually acting around you. It’s also crucial to point out that sometimes life events can make a guy a bit more serious for some time(and you may be right in the middle of such a time period of his life).

How do you know if a guy is serious about you?

One of the biggest indicators that a guy is really serious about you is that he’s taken you to meet his friends, co-workers, and family. Other signs include constant attention, checking up on you, daily texts and calls, gifts, and general thoughtfulness/interest towards you.

How do guys act around their crush?

All guys act a little bit different around their particular crushes, but there are several tell-tale signs that they like you: he pays you a lot of attention, he gives you his time, he asks people about you, he talks about you, he is nervous around you, he smiles alot, and he tries to touch you or be physical whenever possible.

How do guys act when they are in love?

There are endless ways that guys may act who are in love/falling in love with you including being silly, being serious, showering you with gifts, attention, and their time. Increased sexual interest, friendly teasing, and constant communications are also signs.