There are a bunch of reasons why guys get nervous around the opposite sex or those they’re potentially romantically interested in. Read on below and explore these 11 reasons guys act nervous around you!

Why Do Guys Act Nervous Around Me?

From having a crush on you to being intimidated by your looks, smarts, or social status, there are a ton of reasons that guys get nervous around you.

Here are a few of the most typical:

Guys with a crush on you are almost guaranteed to act nervous around you. Even if they aren’t aware of it, if they really like you they act at least a bit differently around you. 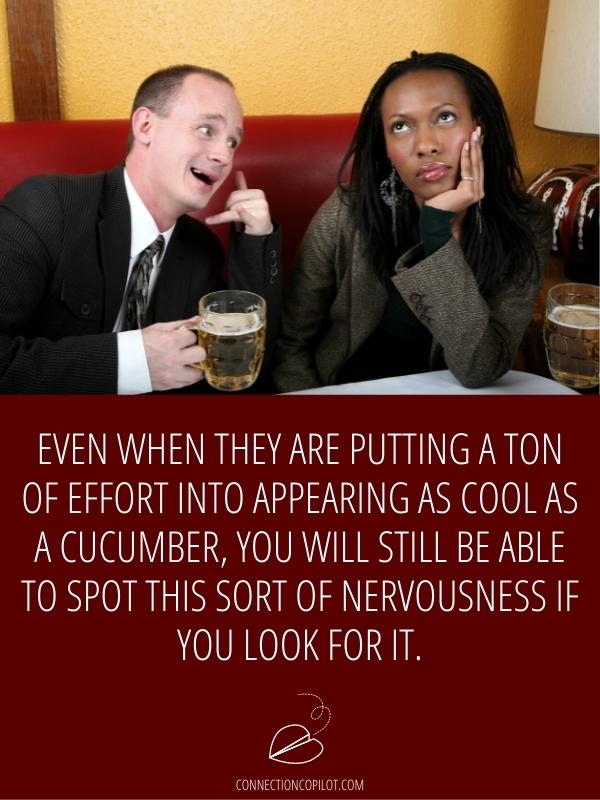 Further, even when they are putting a ton of effort into appearing as cool as a cucumber, you will still be able to spot this sort of nervousness if you look for it.

Sweaty palms, eyes darting away from yours after brief contact, red cheeks, fidgeting, and unexpected laughter for no reason are a few of the biggest tell-tale signs he’s nervous because he has a crush.

2. He Has a Shy Personality

There are quite a few guys out there who have genuine shy and gentle personalities. These sweethearts are going to be nervous around you, 100-percent guaranteed.

The more they like you, the more severe their nervousness becomes as well.

Shuffling feet, rubbing their face and hands, and avoiding direct eye contact with you are a few indicators that he’s just a naturally shy guy who’s feeling nervous around you.

3. Your Looks Intimidate Him 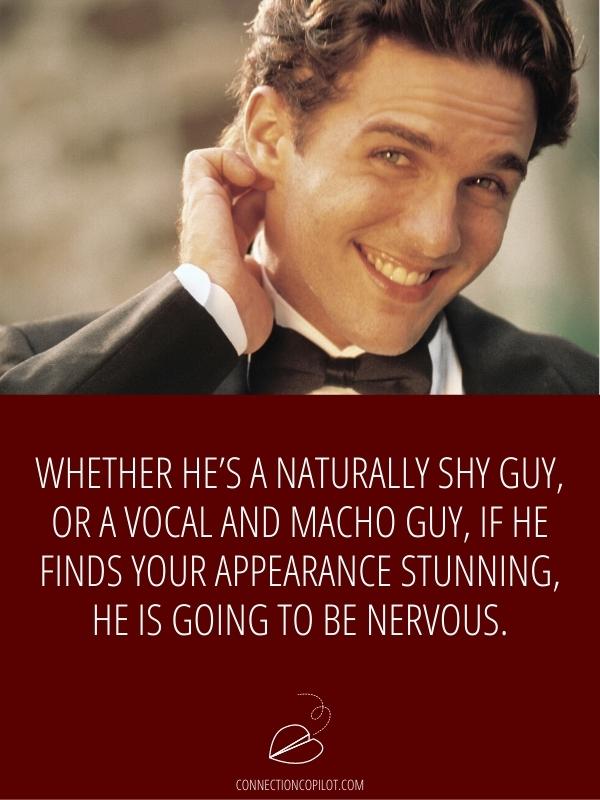 Whether he’s a naturally shy guy, or a vocal and macho guy, if he finds your appearance stunning, he is going to be nervous.

Women’s looks often work like kryptonite on guys: one smile, one eye-lock, and his knees are weak and his head is swimming.

If he’s cool for the most part but is normally the first to break eye contact after a few seconds, with Rosey cheeks, he is more than likely nervous because of your looks.

4. You Have a Higher Social Status Than Him

Guys can get nervous when a girl has a bigger circle of friends, or a higher social status. Whether at school, work, or around town, it’s enough to warrant the nervous behavior of a guy.

It really doesn’t get any more basic than this reason: you’re an honors student, have a higher position at work, or are more popular than him, and he feels that you are “better” than him.

A good way to handle this type of nervousness from guys is to make plenty of eye contact, smile a lot, and try not to make them feel intimidated or insignificant.

5. He is Scared You’re Judging Him

Girls are thought to worry about a lot of silly little things when it comes to relationships, but guys aren’t really much different(if at all). 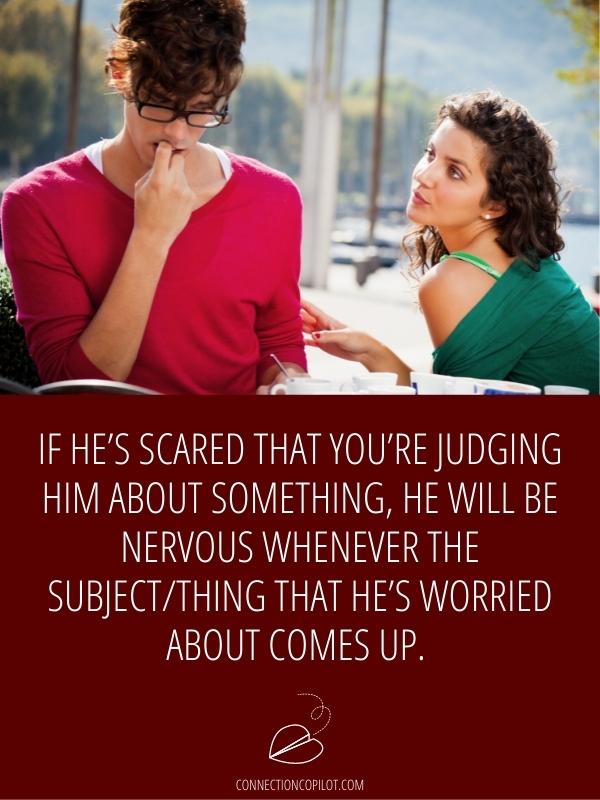 If he’s scared that you’re judging him about something, he will be nervous whenever the subject/thing that he’s worried about comes up.

6. He Wants to Ask You/Know About Something

On the flip side of wanting to tell you something, wanting to ask you about something can drive a guy to the point of nervousness and anxiety.

Whether he wants to know the deal with what school you’re planning on attending, or the scoop on your relationship status change on social media, he could get pretty anxious around you.

The good part is that if he is really into you, and has a bit of courage, he’ll eventually get over his anxiety and ask what he wants to know!

Another pretty common reason guys act nervous around you is that their simply worried you won’t like the real ones. 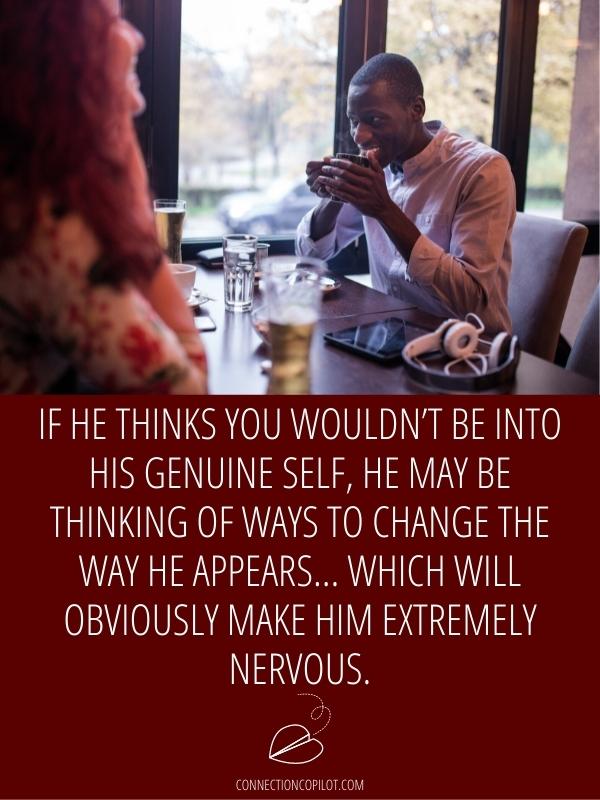 If he thinks you wouldn’t be into his genuine self, he may be thinking of ways to change the way he appears… which will obviously make him extremely nervous.

The best way to avoid this is to let him know what you like about him as you discover the aspects you appreciate most about him.

8. He Wants to Tell You Something

Sometimes guys act nervous around you because they have something on their mind that they want to share with you… but, for whatever reason, they feel like they can’t, or shouldn’t do so.

In these cases, guys may act increasingly nervous/strange until they are finally able to get out whatever it is that they want to tell you/say to you.

9. He’s Not Very Good at Talking to Girls

Sometimes guys are not good at talking to girls… surprise, surprise! 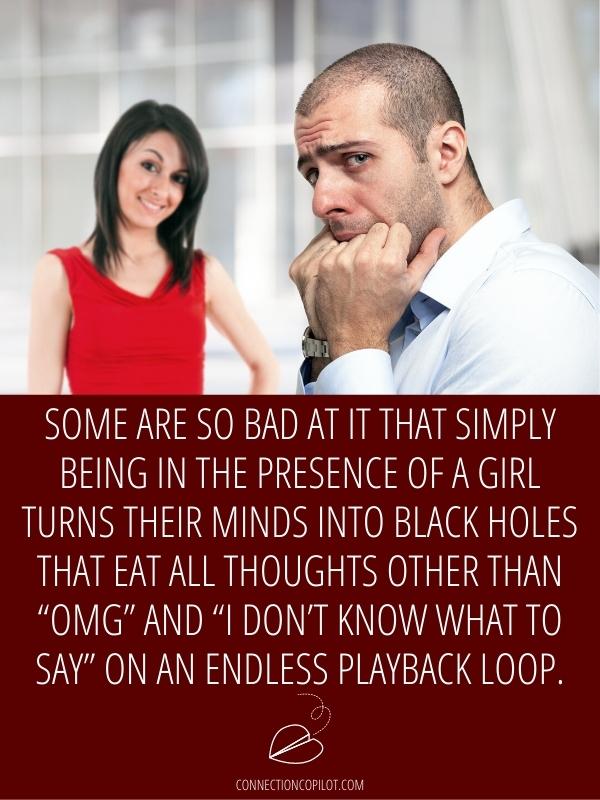 Some are so bad at it that simply being in the presence of a girl turns their minds into black holes that eat all thoughts other than “omg” and “I don’t know what to say” on an endless playback loop.

In these scenarios, you don’t know whether to laugh or cry. But, either way, all you can really do is try not to make it any worse for them.

Smiling and eye contact might help… and then again it might make them turn red as a pepper, and forget what they were going to say next.

10. He Has Something Going on in His Life

No one is immune to the curveballs that life is known for throwing at random intervals, including the guys you are into.

When they have something going on in their life they may become nervous and even agitated around you.

The behavior will seem to come out of the blue, and you may wonder what you’re doing wrong. The truth is, there’s not much you can do except to just be there for him and wait for the storm to pass.

11. He is Thinking About Making a Move

Right before guys find the courage to make their first move, whether that’s grabbing for your hand, or going in for a kiss on the cheek, they may display a bit of nervous behavior. 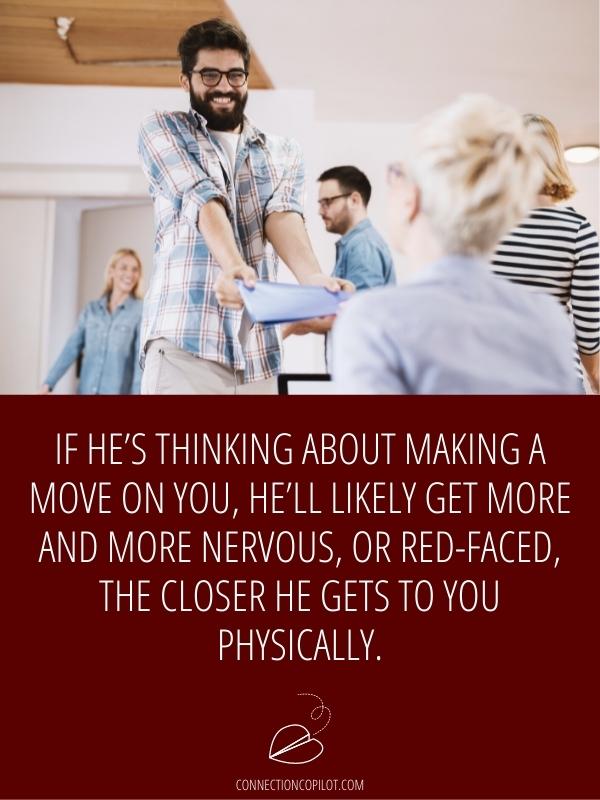 If he’s thinking about making a move on you, he’ll likely get more and more nervous, or red-faced, the closer he gets to you physically.

If you suspect this is the case, taking a small step toward him, or even just attempting to make and hold eye contact for several seconds may be enough to help him take the leap.

What does it mean when guys get nervous around you?

There is a never-ending list of reasons why guys may get/be nervous around you. A few of the most common factors include liking you “like that”, wanting to tell you or ask you something, being intimidated by your beauty, and thinking for some reason that you won’t accept the real him if he shows you.

Why is my crush so nervous around me?

It is absolutely normal for your crush to be nervous around you. Things like wondering if you will accept them, being impressed with your appearance, and simply not having much dating experience are often the reason behind the behavior. But, if your crush wasn’t nervous around you, you should wonder how much they really like you in the first place.

How do you know if he’s “catching feelings” for you?

Knowing when a guy is catching feelings for you isn’t nearly as hard as you might believe. Look for signs like him trying to be as close as possible to you as he can at all times. Staying in touch with you daily, and constantly checking in on you at work, school, or in social situations to make sure you are ok are also indicators. And, of course, lots of smiling and eye contact.