Guys are known for being jerks to everyone, including their closest friends and yes even you, the person they like. Read on below and discover 11 reasons guys act like jerks when they like you, as well as how to respond to it!

1. He’s Confused About His Feelings Towards You 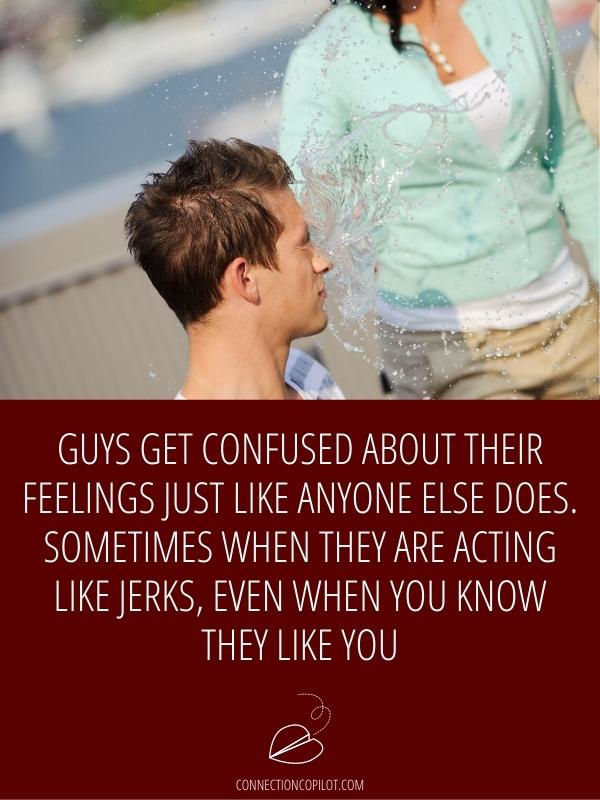 Guys get confused about their feelings just like anyone else does. Sometimes when they are acting like jerks, even when you know they like you, it’s simply because he’s confused about how he feels about you, about a relationship, maybe even about life in general.

2. He Doesn’t Want You to Know He Likes You

Another popular reason that guys are sometimes silly enough to think works is being a jerk to you when they like you just so you won’t find out they like you.

Come on, guys! This trick really doesn’t work. A woman KNOWS if you like her or not. Don’t even fool yourself by thinking otherwise.

3. He Thinks You’re Better Than Him

Believe it or not, sometimes guys are jerks even when they really like you because for some reason they think you are better than them. Maybe you are better at sports than him or went to a better school than he did. 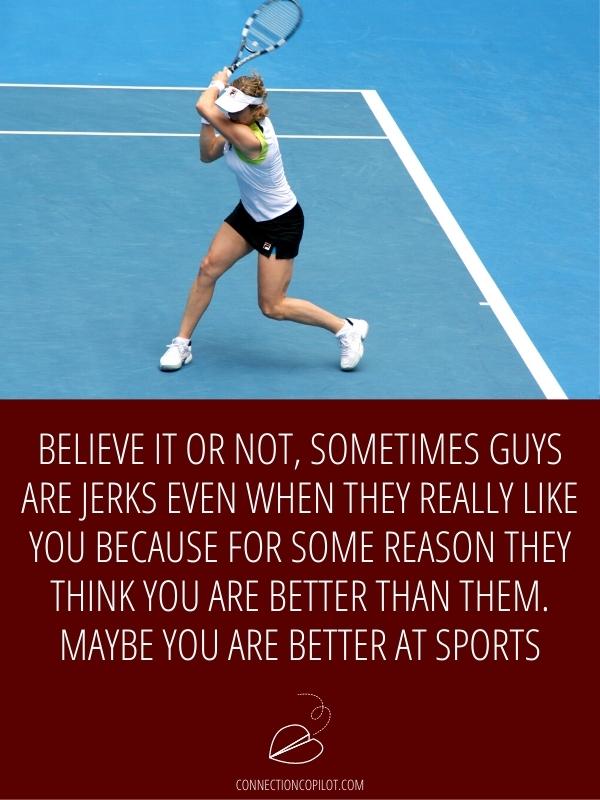 Perhaps you have a nicer car or a higher-paying job. Whatever it is, if he thinks you’re better than him because of it, expect him to turn into a jerk from time to time when certain subjects come up!

Another one that flies by under the radar more often than not is when a guy just really isn’t into us the way we think he is and is sometimes a jerk.

Maybe he wants something from us, or perhaps his feeling simply changed after some time, but we think he is super into us, and truth be told he’s not feeling us like that.

In these situations, the more we make them feel like we think they like us, the more of a jerk they might be just to let us know it’s not how we think it is.

5. He’s Into You and Jealous of Other Guys 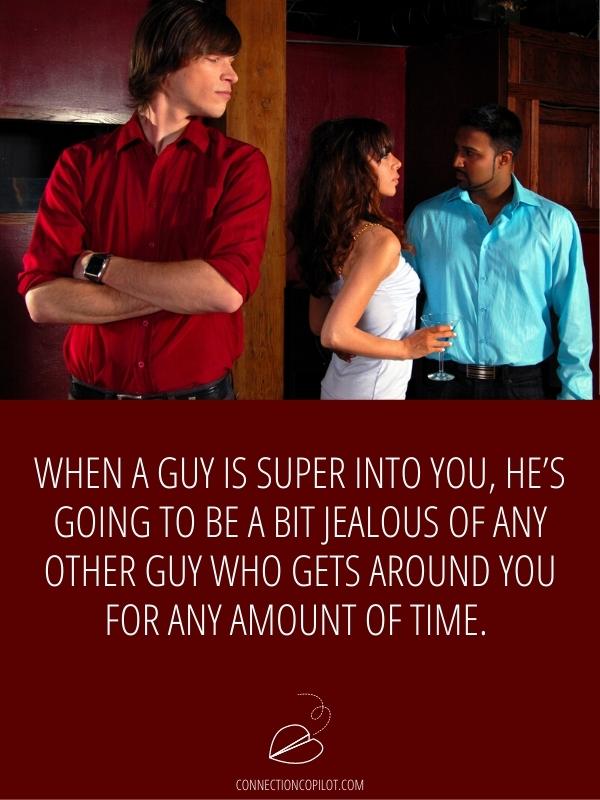 When a guy is super into you, he’s going to be a bit jealous of any other guy who gets around you for any amount of time.

The more time you spend away from him, around other guys, be it at school, work, or otherwise, he is not going to be happy about it. Hence, he may be a jerk about it.

Keep in mind that even the best of guys get jealous, so don’t think because you’re dating prince charming that he won’t have a jerk-fit every now and again due to you being around other guys.

6. He Enjoys Your Attention

Unfortunately, some people learn at a young age that when you act up/be bad you get special attention.

Sometimes when guys are being jerks to us for no apparent reason, and we know that they really like us a lot, it can simply be that he’s attempting to get your attention… just going about it the wrong way.

The good thing is that these guys tend to knock it off once they mature a bit more!

There is always that one guy that gets no greater pleasure out of life than simply causes mental anguish to others. Guys like that can like you, or not, and subject you to equally messed-up mind games either way. 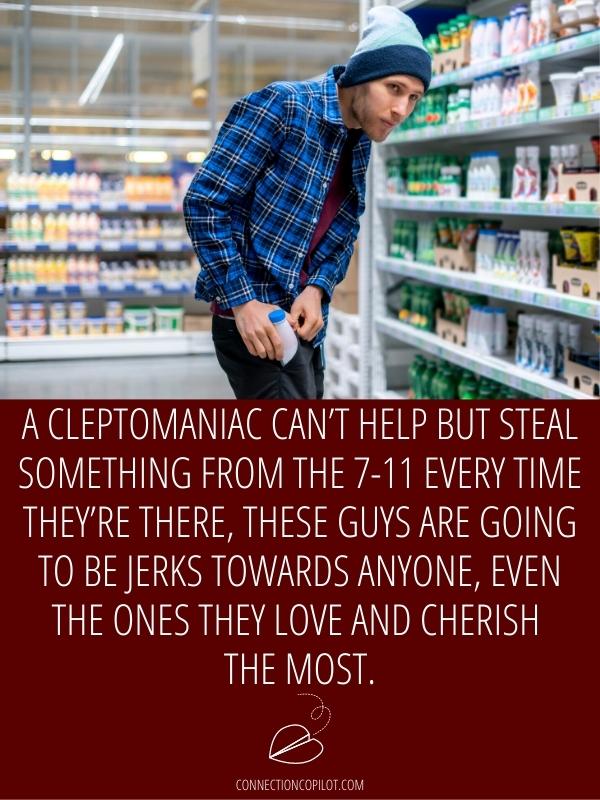 As a cleptomaniac can’t help but steal something from the 7-11 every time they’re there, these guys are going to be jerks towards anyone, even the ones they love and cherish the most.

8. He isn’t Ready for a Real Relationship

Not all guys are ready for the level of commitment and communication that a real and long-term relationship demands.

If a guy suspects that you’re after a long-term relationship, and he isn’t ready, he may just act like a jerk from time to time just to make you second-guess whether or not it’s a good idea.

If he really is into you though, he’ll stick around and eventually open up to the idea of getting together for the long run.

9. He Just Wants to Hookup Already

It’s no secret that some guys just want to hook up and then scoot on down the road. If that’s you guy’s plan, but it’s not happening how they’d envisioned it unfolding, they may start to act like a jerk seemingly out of the blue. 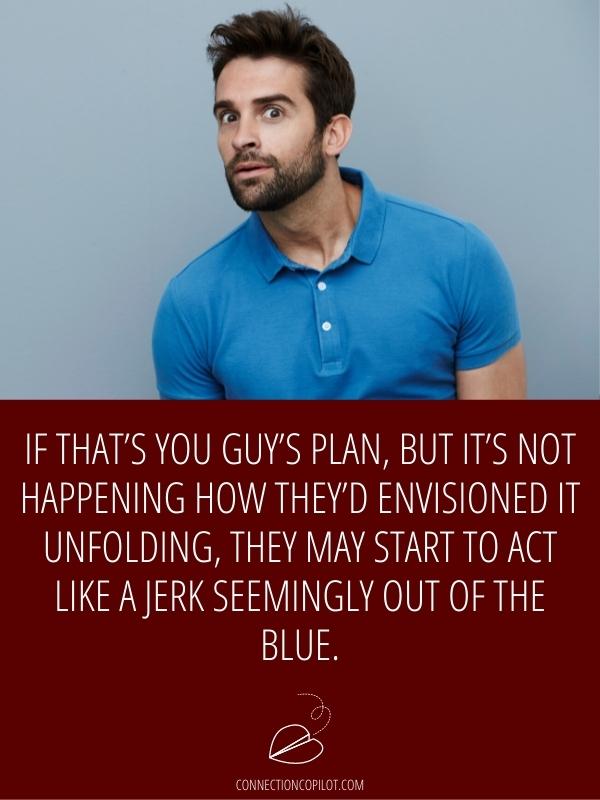 Hopefully, if this is the case with your guy, you can pick up on some other signs that all he wants is sex and put 2 + 2 together and send him packing(unless you’re good with just hooking up!).

10. He’s Scared of Being Hurt Again

Just as many guys have been hurt by women as the opposite, even sometimes it doesn’t seem so.

That said, an equal number of men are scared of being hurt by someone again if they get themselves into a serious relationship.

If this is the case, the closer things progress to being a real relationship, the more jerky he may act. 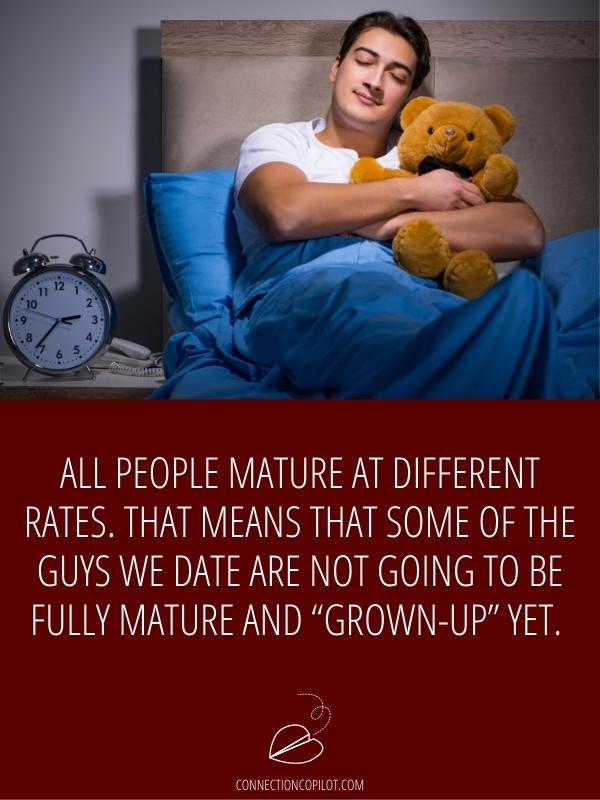 All people mature at different rates. That means that some of the guys we date are not going to be fully mature and “grown-up” yet.

If you’re really into a guy, and you can clearly tell he’s into you too, but he isn’t fully mature yet, expect to deal with a dr. jerk-hole and mister nice-guy scenario for some time to come.

Now that we’ve covered the main reasons guys act like jerks when they like you, here’s how you can respond to them:

There are endless amounts of reasons for guys acting interested suddenly, seemingly out of the blue. They could have finally faced their fears of rejection and decided to let you know how they feel, or have even just realized their true feelings for you. They might also be taking advantage of you having recently become single.

Why do guys come on strong then pull away?

Guys come on strong and then pull away for a plethora of reasons including mainly fear and uncertainty. Mind games, confusion, not knowing how they feel, and changes of the heart may also play a part in guys coming on strong and then suddenly pulling away from you in a relationship.

Guys are famous for letting you know that they like you each in their “own way”. One guy may stand as near to you as possible at school or work, while another may text you first or the last thing each day. Other hints include lots of smiles, regular gifts/surprises, and genuine friendship and support.