Guys have tons of reasons for acting interested when it’s actually the last thing that they are, as frustrating and time-wasting as it is.

Read on below and learn these 17 reasons guys act interested when they are not!

Why Do Guys Act Interested When They Are Not?

1. They Just Want to Get Physical 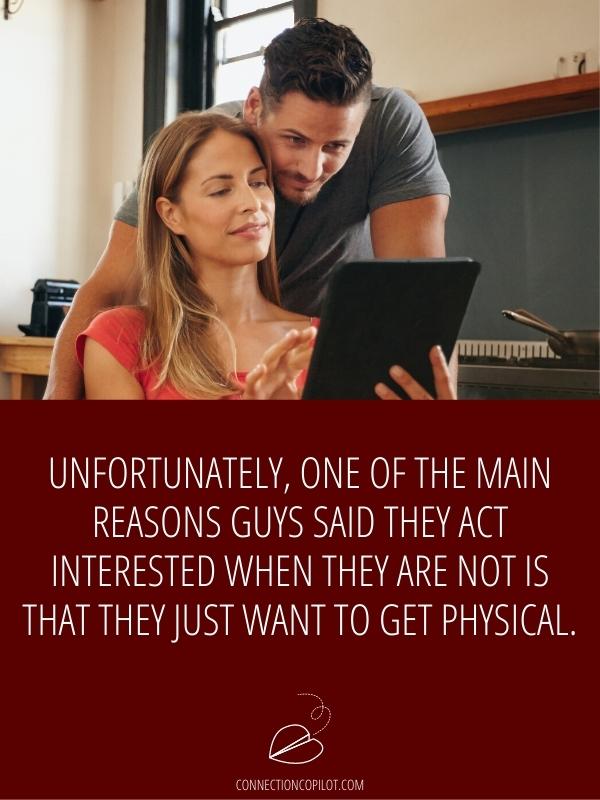 Unfortunately, one of the main reasons guys said they act interested when they are not is that they just want to get physical. The train of thought behind the actions is enough to frustrate us, but it is an obvious possibility we should always be aware of when getting to know someone.

Some guys are super into you, and then all of a sudden they aren’t because they’ve decided that you’re not compatible. The problem is, they keep acting interested because they don’t want to let you down, or maybe they just need some time to process how to break the news.

3. They’ve Changed Their Mind About You

The third reason on our list is similar but different from when guys decide that you’re not a compatible partner. Sometimes guys change their minds about you, but for some other reason than thinking that you’re not compatible. 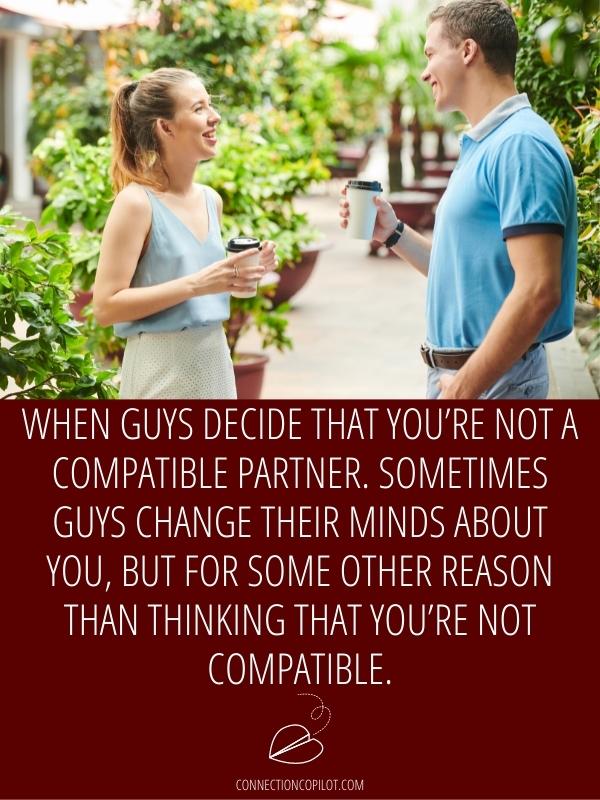 Another reason that is semi-related to the second and third reasons on our list that guys act interested when they are not is that they realize that they think you’re boring. This isn’t necessarily the same thing as changing their mind about you or thinking you’re not compatible because they could have always thought you were boring, to begin with. They are just now admitting it to themselves.

5. He’s Struggling to Understand How He Feels 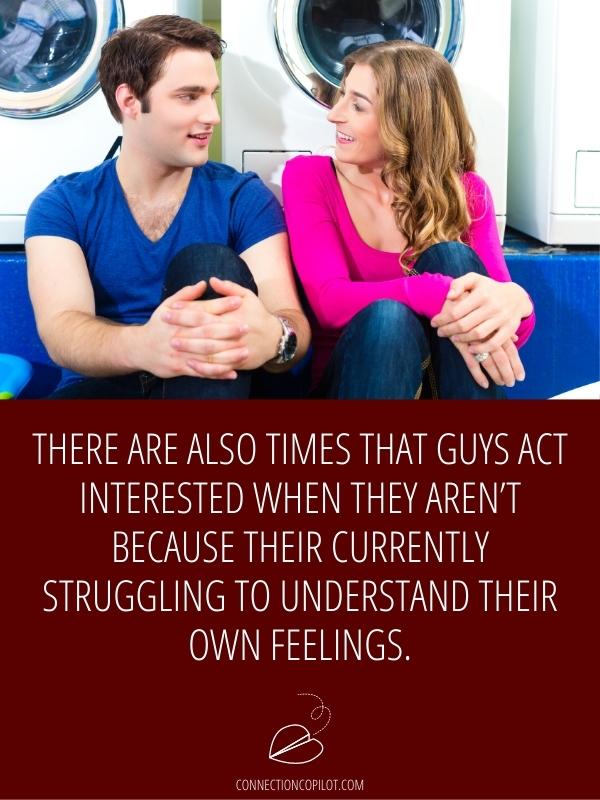 There are also times that guys act interested when they aren’t because their currently struggling to understand their own feelings. Whether they are trying to come to terms with something that’s happened in their life, or with their feelings towards you and the possibility of a long-term relationship, they may continue to act interested until he further figures things out.

6. The Sex Just Isn’t as Good as They’d Imagined

When the sex just doesn’t turn out to be as good as they’d fantasized about, some guys lose interest right away. The thing is, sometimes they continue to act interested. Most of the time it’s because they don’t want to hurt our feelings, but other times it’s because the sex wasn’t bad(just wasn’t “great” either), and they might want to hook up again. 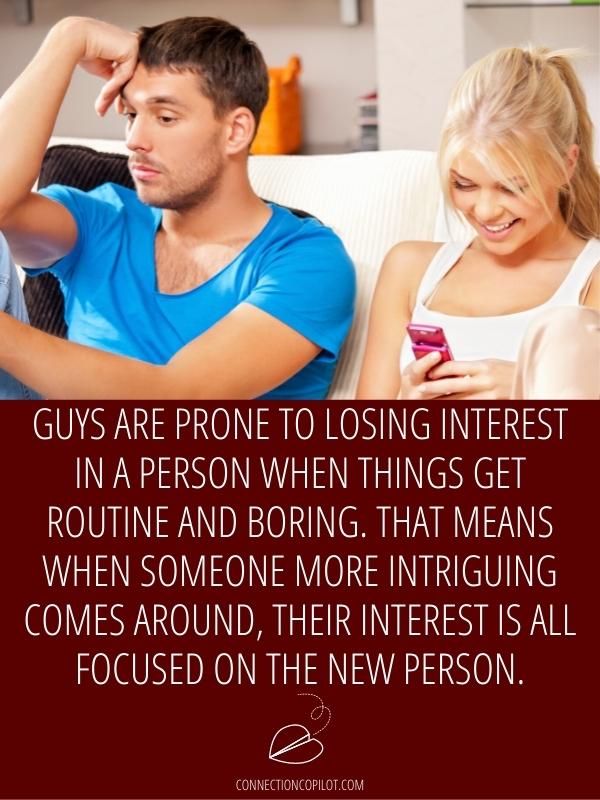 Guys are prone to losing interest in a person when things get routine and boring. That means when someone more intriguing comes around, their interest is all focused on the new person. Unfortunately, it’s not unusual for guys with this mind frame to keep acting interested in you just in case things with the new girl don’t pan out.

8. He’s Been Cheating On Someone Else with You

Speaking of unfortunate events, sometimes guys are cheating with you, on someone else, without you being aware of the fact. It’s terrible, but it is a very real possibility. The worst part about it is that you may never realize it until it’s too late and you’re the one he’s cheating on with someone else(possibly even the person he was cheating on with you in the first place).

9. He’s Been Cheating on You With Someone Else 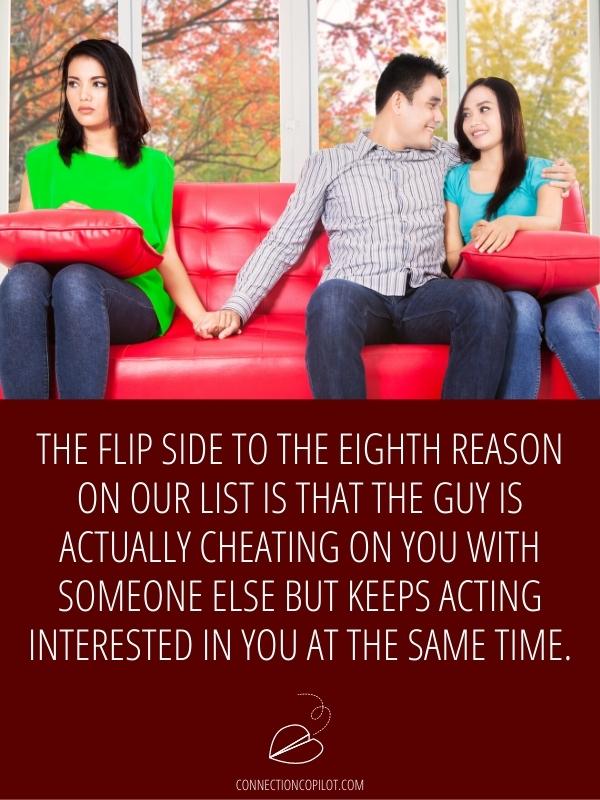 The flip side to the eighth reason on our list is that the guy is actually cheating on you with someone else but keeps acting interested in you at the same time. The reasoning behind this behavior is apparent: if things don’t work out with his new partner, he wants a safe and secure relationship with you to fall back on.

It takes an egotistical guy to do some of the things we’ve already discussed on this list, and we’ll discuss a few more further on down the list. So, it shouldn’t take any stretch of the imagination, or further explanation, to realize that sometimes when guys act interested when they are not it really boils down to their ego.

Believe it or not, a lot of guys have a deep-rooted need to be/feel like a hero. Whether it’s modern programming, films, TV shows, or a deep-seated genetic trait, is anyone’s guess. That said, if you haven’t made him feel like a hero, he may continue to act like he’s into you until you’ve done so(or he gives up and goes on to the next damsel in distress). 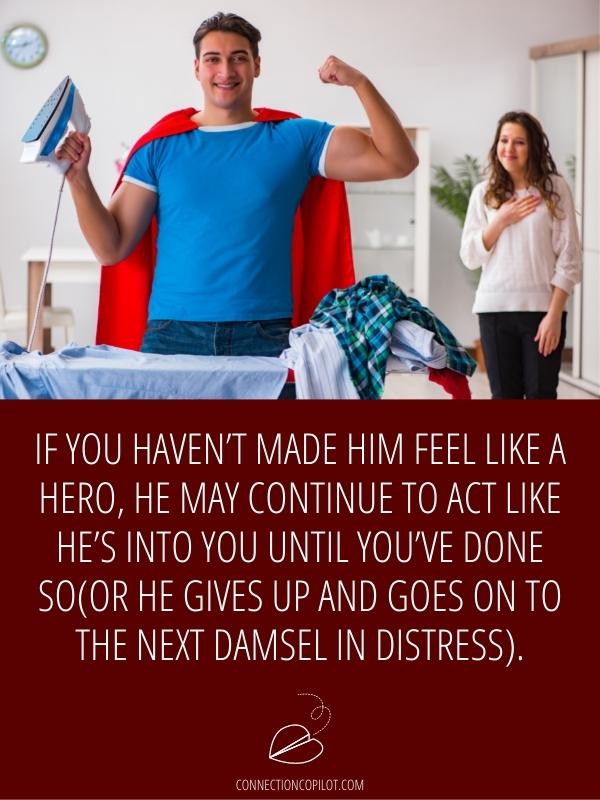 12. He’s Got Stuff Going On in His Personal Life

Another real shocker is that sometimes guys just have a lot of stuff going on in their personal life and they aren’t actually just acting. Guys can be super interested in you and seem like they are just stringing you along because things keep popping up. Whether it’s a sick family member, a busy job, or otherwise, there’s plenty of stuff that may be keeping your guy busy.

13. He Thinks You’re Better Than Him 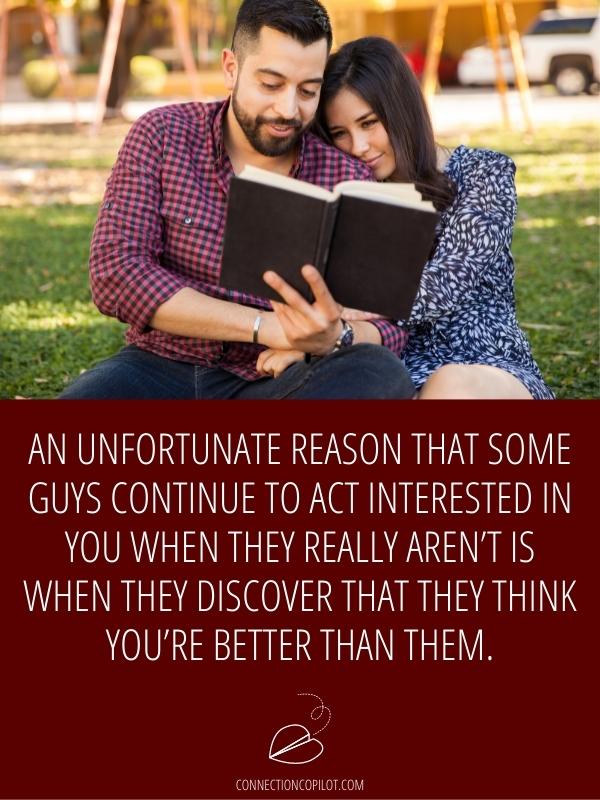 An unfortunate reason that some guys continue to act interested in you when they really aren’t is when they discover that they think you’re better than them. This can be because of your car, job, past relationships, or any number of things. Further, there isn’t really much you can do about it, especially if he doesn’t give you any clues to how he feels about things.

14. He Thinks He’s Better Than You

On the other side of the coin to number 13 on our list, sometimes guys feel like they are better than you after getting to know you for a while(especially if you are humble/modest). Acting like they’re still into you may be an indicator that they want a physical relationship with you, despite their feelings of superiority.

15. He’s Scared to Hurt Your Feelings 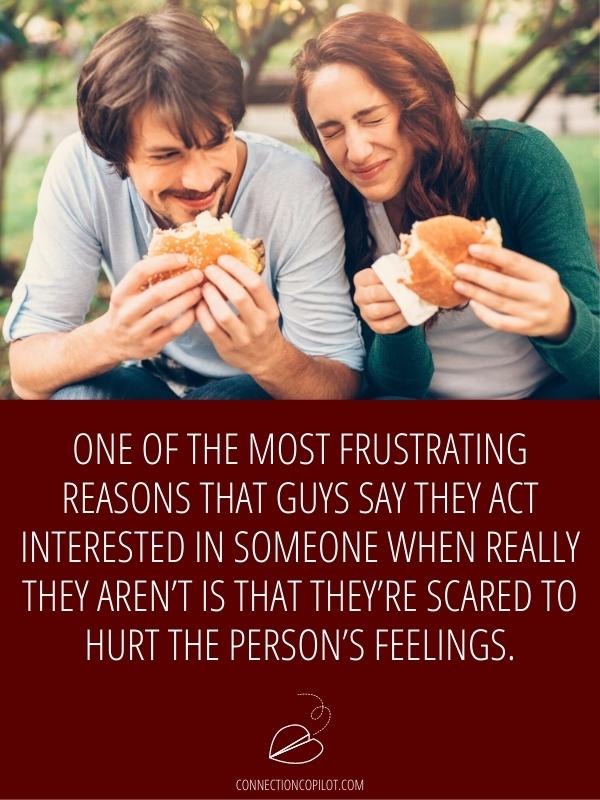 One of the most frustrating reasons that guys say they act interested in someone when really they aren’t is that they’re scared to hurt the person’s feelings. Especially if a guy likes you as a person, or even close friend, but not as a potential partner, they may continue to act like they’re into you for some time. Whether they need time to process things or are just hoping you’ll eventually start dating someone else more interesting usually just depends on the dynamics of the situation.

When guys decide they are no longer interested in you but don’t know how to handle it, they are likely to just keep on acting the same way they did when they were into you. It sucks for the other person, because the guy may even continue to go on dates, hang out, and get physical… leading you on while not being interested in a long-term thing even in the slightest. 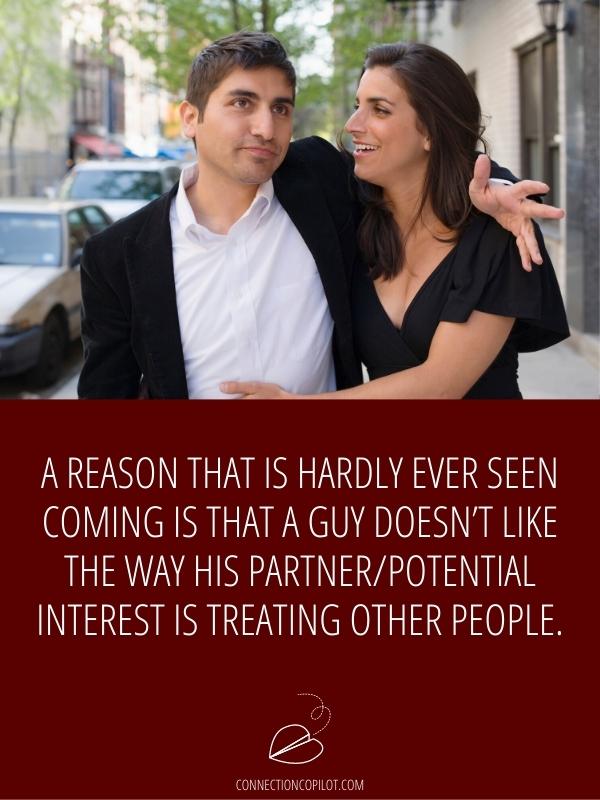 A reason that is hardly ever seen coming is that a guy doesn’t like the way his partner/potential interest is treating other people. Whether it’s rude behavior, no loyalty, or some other trait that he finds unflattering, he may not break stride in his act/routine but inside he’s already putting together a relationship exit plan.

There’s a never-ending reason for guys playing like they are interested when they aren’t and then pulling away. The most obvious reason is that they just want sex from you, whether it happens or not they end up pulling away in a matter of time. Other reasons include being scared of commitment, not finding you compatible, and personal issues.

How can you know a guy is really interested?

Each guy has their own little way of letting you know that you’re interesting to them. Some of them try to touch you, others laugh at all your jokes even when they aren’t funny. Other indicators are giving you gifts/lots of attention, making eye contact, lots of smiling, fidgeting, and having a red face.

How do you show guys you’re interested without looking silly?

There are lots of ways to show a guy that you’re into him and find him interesting without looking silly while doing so. A few of the best ways include light flirting, complimenting him, seeking out conversation with him, and smiling while making eye contact.