There are numerous reasons that guys may act differently in person than in text. Read on below and find out the top 11 reasons and what you can do about it.

Why Do Guys Act Different in Person Than Text?

1. He’s Revealing His True Self 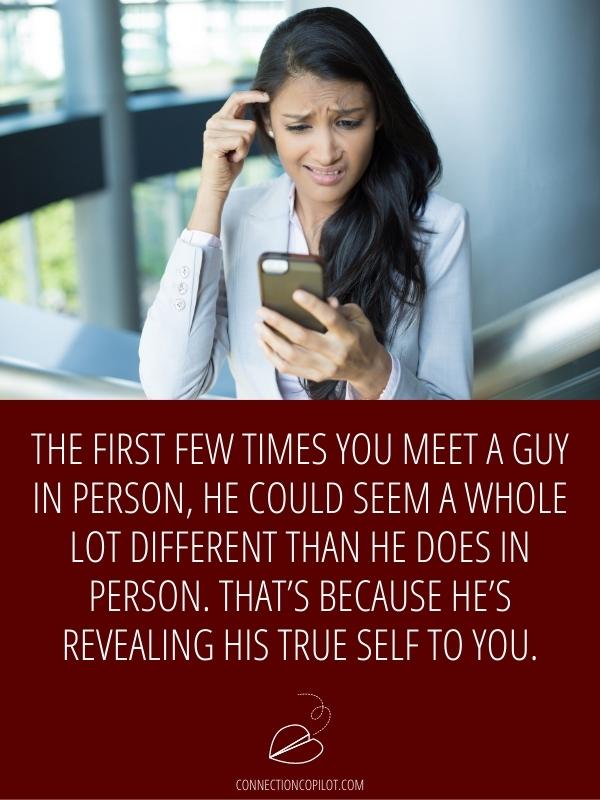 The first few times you meet a guy in person, he could seem a whole lot different than he does in person. That’s because he’s revealing his true self to you. After you’ve had a few dates/spent some quality time together, he should be more similar in text and in person. If he continues being different in person than in text, something doesn’t add up.

Talking through text gives guys a bit of breathing room, and the chance to talk bolder than perhaps they would to your face. Especially when a relationship is in its beginning stages, and he hasn’t quite warmed up to you completely(and vice-versa), it’s no shocker that he may act a bit different in person than in text. The good thing is that as soon as you get to know each other better, his comfort level will increase and he won’t seem so different.

3. He Has Something to Hide

When guys have something to hide, it’s easy to do so in text messages. In-person, however, is a much different story. Depending on what the nature of the secret is, his behavior may range from slightly different to seeming like he is a whole different person. Be prepared for some strange behavior, because depending on how long the secret lasts his behavior isn’t likely to change until things are resolved. 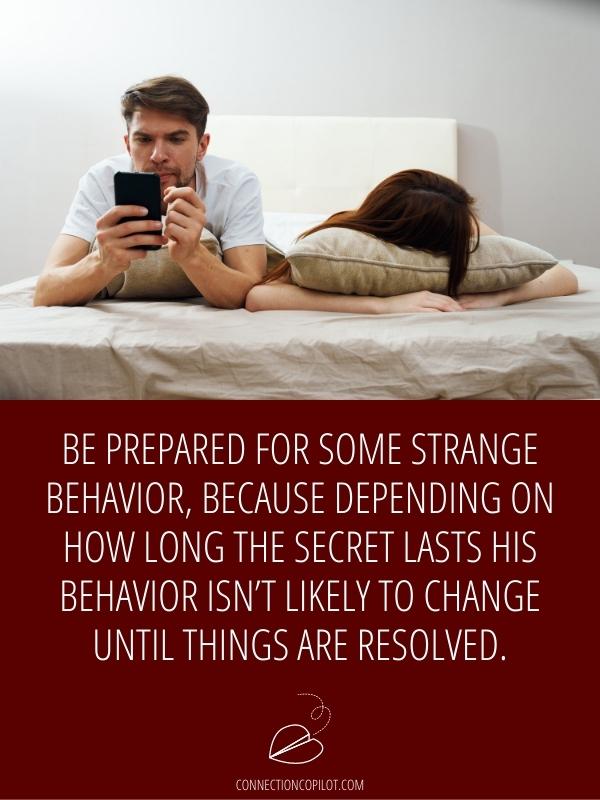 4. He’s Intimidated of You in Person

Sometimes the reason a guy acts differently in person than in text is that when he sees you up close and personal, and gets to know you a bit, you’re actually intimidating to him for some reason. It could be because of the car you drive, the school you attended, or even the place you work or the family you belong to. But, whatever it is, it’s more than enough to leave him feeling intimidating and therefore acting differently than in text(before he was intimidated by you).

5. He Has Little Experience Dating 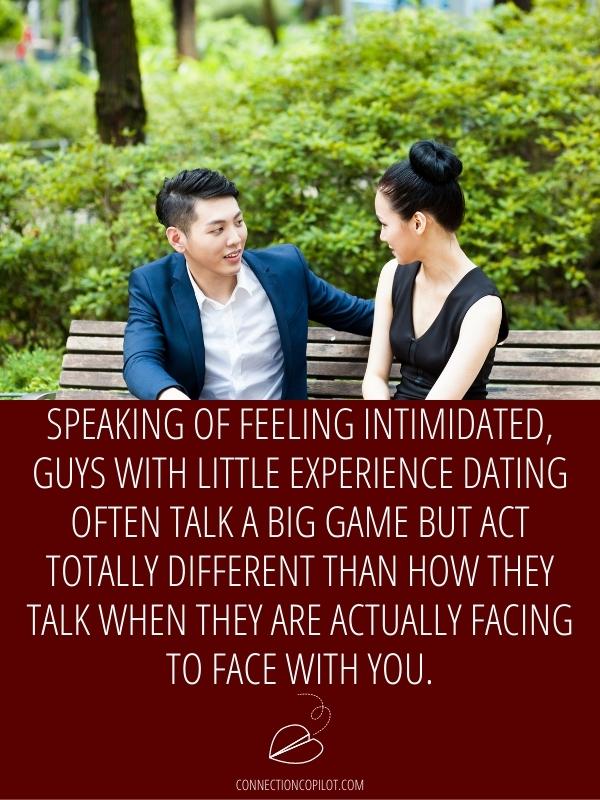 Speaking of feeling intimidated, guys with little experience dating often talk a big game but act totally different than how they talk when they are actually facing to face with you. The reasons behind their behavior are self-explanatory; they have no idea what to do, are intimidated, excited, and are turned on all at the same time.

6. You Aren’t What He Expected

If you aren’t what a guy expected from text messages and talking online or over the phone, he make act differently than you expected as well. Maybe he just wanted a hookup with a certain type, and you don’t fit the bill. Or, there could be something about you that you failed to mention that strikes him the wrong way(like being in a relationship or knowing his ex). Whatever the case is, he’s liable to act differently and possibly even cut things short as well.

7. He Just Wanted to Get in Your Pants 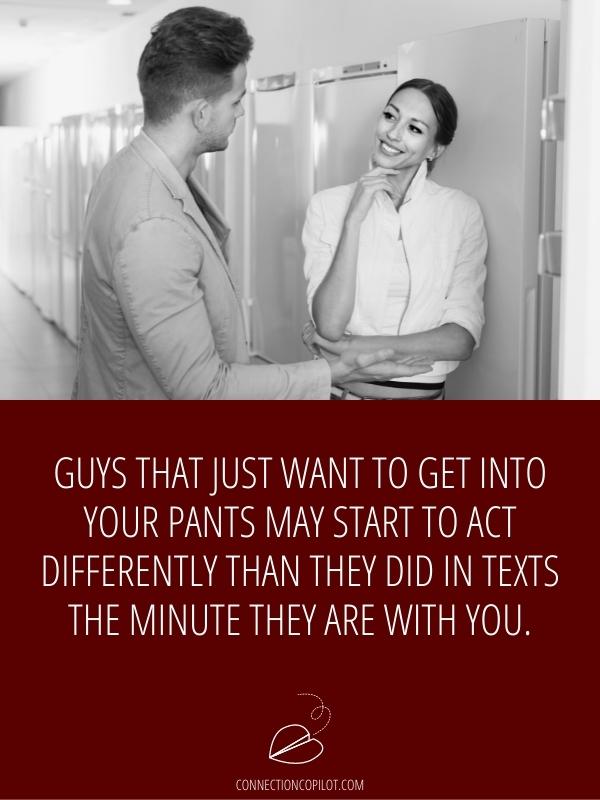 Guys that just want to get into your pants may start to act differently than they did in texts the minute they are with you. Whether they drop the nice guy act and go straight for the money, or they realize you aren’t going to sleep with them and they get upset, you wouldn’t be the first one a guy acted differently with than in-text just because he wanted in your pants or the last.

8. He’s Scared of Your Judgment

Guys may seem all macho, with bulletproof feelings(or no feelings at all in some cases), but that really isn’t the fact at all. Guys have feelings, and believe it or not, they can be just as deep, or deeper, than females. Case and point; when he’s scared of your judgment about something/some aspect of him, he’s liable to act differently the moment said thing is brought up in conversation or even thought of by him(while in your presence). 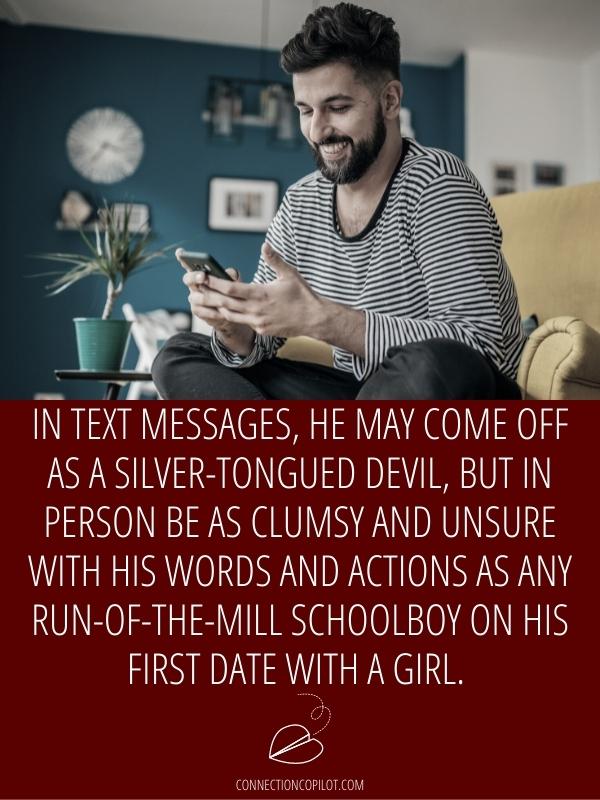 In text messages, he may come off as a silver-tongued devil, but in person be as clumsy and unsure with his words and actions as any run-of-the-mill schoolboy on his first date with a girl. So, if your guy isn’t known for being a casanova type, don’t be alarmed if he acts a bit different than text at first. Once he gets warmed up to you, and you to him, he won’t be so nervous and the real him will shine through.

When a guy doesn’t know what to do, especially when he’s in front of someone he likes, he tends to react like a deer in headlights on the inside. However different his outward appearances and actions may seem, you can trust that inside he is feeling more nervous and uncomfortable than everyone in the room put together. In this case, he’s acting differently because he just doesn’t know how to act or what to do. He’s probably not even aware of what he’s saying or doing. 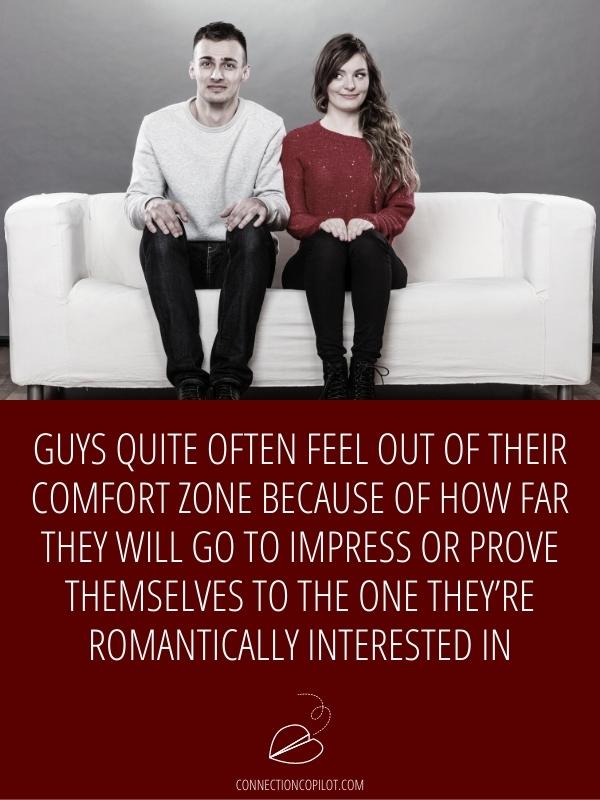 Last but not least, guys quite often feel out of their comfort zone because of how far they will go to impress or prove themselves to the one they’re romantically interested in. In these cases, it may be because of the venue, the other people with you, or even purely the level of attraction he feels towards you. Whatever the case, once he’s less nervous, and more comfortable with the situation, he’ll seem more like himself.

Now that you know some of the main reasons that guys act differently in person than in text, here are some pointers for how you can deal with it:

How do you know if a guy is not interested in you through text?

Guys can be extremely interested but not text much, if at all. There are numerous reasons including that they might not be good with words, they are scared of rejection, and you may not like them as much as they like you. Believe it or not, it could also be that they don’t have a very good phone at the moment.

Why do guys reduce texting?

When guys stop texting as much, there’s usually a reason behind it… but sometimes it’s just because they got busy. The most common reasons include that he’s gauging your interest, he wants to see if you will engage him in conversation, or if you’ll tell him you miss him.

100+ Flirty Texts To Make Him Laugh

What To Do When He Doesn’t Text You Back: 15 Responses

When a Guy Includes Your Name in a Text: 15 Meanings

101 Text Messages to Make Him Obsess Over You

When a Guy Takes Hours to Text Back (15 Reasons Why)

When a Guy Stops Texting You Everyday: 21 Meanings

75+ Texts to Make Him Think About You All Day

75+ Texts to Make Him Miss You (For Long Distance Relationships)

How to Get a Guy to Text You First – 30 Ways That Work Fast!

101 Sweet Goodnight Texts for Him

150 Flirty Texts for Him – Messages That a Guy Will Love

101 Flirty Goodnight Texts for Him

50 Secret Ways to Say I Love you in Text

101 Cute Goodnight Texts for Him

50 I Know You’re Asleep Texts for him

101 Thinking of You Texts for Him

25 You Make Me Happy Texts for Him

25+ Inspirational Good Morning Texts for Him

101 Sweet Good Morning Texts for Him

100 Flirty Good Morning Texts for Him (Send These To Your Crush, Boyfriend or Husband!)

75+ Funny Good Morning Texts for Him

75 Long Good Morning Texts for Him to Copy and Paste

75 Simple Good Morning Texts for Him

25+ Witty Good Morning Texts for Him

25+ Thoughtful Good Morning Texts for Him

25+ One Month Anniversary Texts For Him

How Long Should I Wait to Text Him Back After He Ignored Me? (ANSWERED)

How Long to Wait Before Texting a Guy Back (ANSWERED)

Double Texting a Guy You Just Met – Is It Okay?

Guy Hot and Cold Texting (What It Means)

How Much Texting Is Too Much to a Guy? (Answered)

Guy Uses Exclamation Points in Texts – What Does It Mean?

Should You Text a Guy When He’s on Vacation? (ANSWERED)

How to Not Be Boring When Texting a Guy (10 Tips)

Does Not Texting a Guy Back Make Him Want You More? (ANSWERED)

A Guy Stopped Texting Me Out of Nowhere: 10 Things to Do

35 Texts to Make Him Forgive Me

101 Sexy Text Messages That Will Make Him Crave You

53 Things to Text Him to Make His Day

50 Texts to Make Him Want You Back

15+ Texts to Make Him Feel Bad

45+ Texts to Make Him Laugh at Work

20 Texts to Make Him Ask You Out

15 Texts to Make Him Worry About Losing You

How to Show a Guy You Like Him Over Text

What to Text Your Boyfriend When He’s Mad at You

What to Text When a Guy Pulls Away (Without Seeming Clingy)

What to Text a Guy Who Keeps Blowing You Off

35+ Examples of What to Text a Guy First

What to Text a Guy First Without Seeming Desperate

20+ Examples of What to Text a Guy You Just Met

15+ Things to Text a Guy to Make Him Like You

40+ Dirty Things to Dare a Guy Over Text

What to Text Back When a Guy Calls You Beautiful

What to Text a Guy You Can’t Stop Thinking About

What to Text a Guy When Conversation Gets Boring

This is What to Text a Guy After Making Out