It is no secret that guys act differently around their friends. But, why exactly is that? Read on below and explore their answers.

Why Do Guys Act Different Around Their Friends?

So, you wanna know the most likely reasons your guy acts differently when he gets around his friends?

1. It’s Just a “Guy Thing”, and Nothing Personal 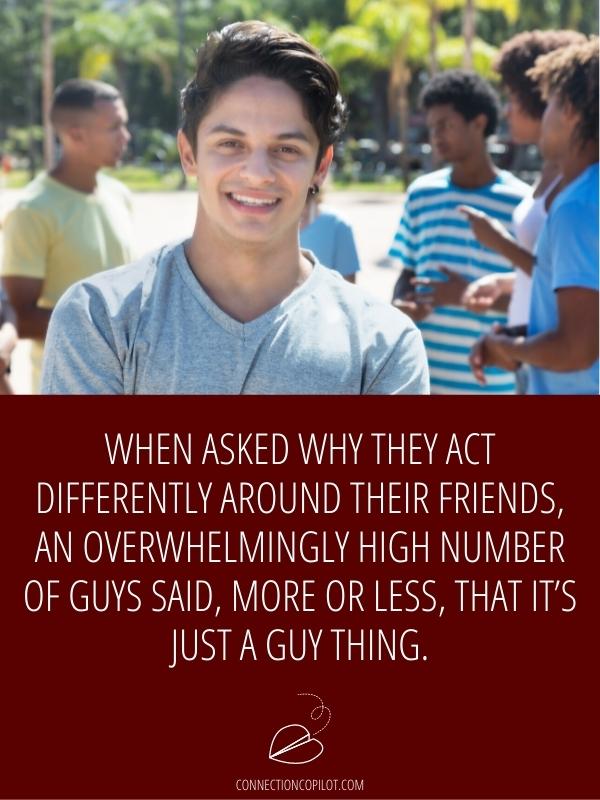 When asked why they act differently around their friends, an overwhelmingly high number of guys said, more or less, that it’s just a guy thing.

What that actually means, most of them didn’t elaborate. But, some of them did go on to say that their girlfriends and wives shouldn’t bother themselves about it, and that it’s really not a big deal.

Whether it’s genetic, written in guy-DNA, or a deep-rooted effect of modern social-engineered programming if a vast majority of men write it off as simply being a guy thing, who are the rest of us to question this answer?

2. Their Friends Were There Before You Were

Guys who have invested years of time into relationships with their friends will almost always act differently around friends.

That doesn’t mean it’s all bad or even bad at all. But, it does mean there is little chance of getting around it.

So, you might as well start warming up to the idea that he may always be one way when you’re alone and another when he’s with the guys.

This points back towards the number one reason on our list: it’s just a guy thing.

3. They Don’t Want to Reveal Their True Self

Believe it or not, for whatever reasons, many guys have admitted that the reason they act so different around their friends is that they don’t want to reveal their truest form of self.

It sounds terrible, but it’s not exactly what you think, or so they claim: they simply want their friends to keep liking them for who they think they are.

On a deeper level, there are numerous reasons why guys may want to reveal their true selves to their friends, especially anything remotely close to a lovey-dovey nature. 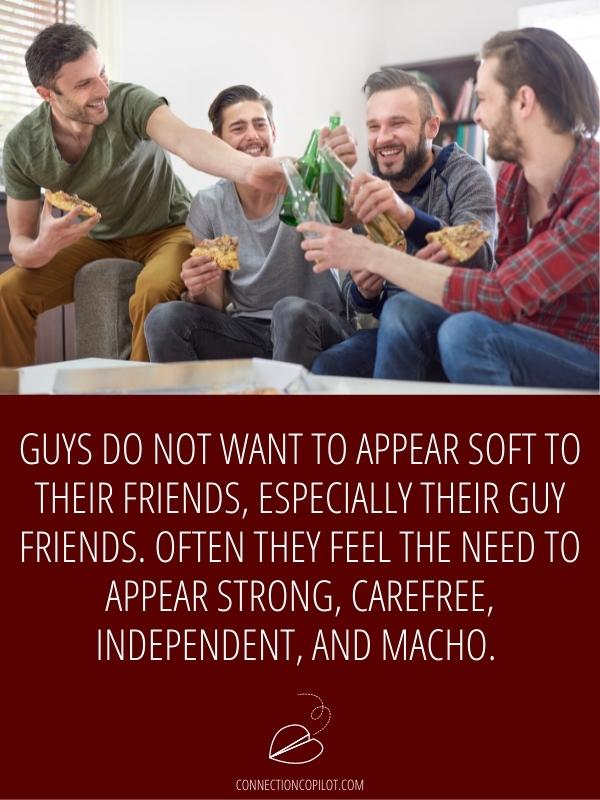 Guys do not want to appear soft to their friends, especially their guy friends. Often they feel the need to appear strong, carefree, independent, and macho.

4. They Are Not Yet Fully Mature (Mentally)

In the case that you are dating a younger guy, or a guy who acts younger than his age, he is likely not yet fully mature.

Don’t get us wrong, guys will always be guys, and perhaps even act a bit differently around their best group of friends.

But, once a guy is genuinely mature, mentally, he won’t continue to act as drastically different in front of different groups of people, including his friends.

5. He is “Showing Off” to Earn Respect

A lot of guys take every chance they get to show off in front of their friends.

Many times this is nothing more than macho bravado and attempts to earn basic respect from their pals. 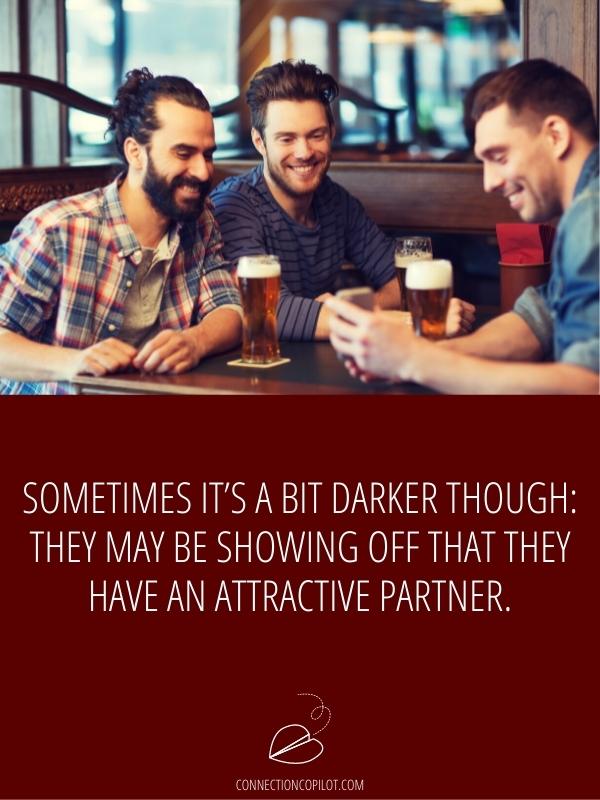 Sometimes it’s a bit darker though: they may be showing off that they have an attractive partner.

6. He Thinks It’s What His Friends Expect/Demand From Him

Guys can be one guy around you and the minute they are in the presence of their friends, blam, they’re someone totally different.

Sometimes the entire reason for this sudden and sometimes drastic shift is that it’s what he thinks his friends expect or demand from him.

He’s known his friend for a long time, probably much longer than you, and he believes they view him in a certain light.

What he is doing when he’s around them has nothing to do with you, he is simply ensuring they continue to see him as the same person he has always been. 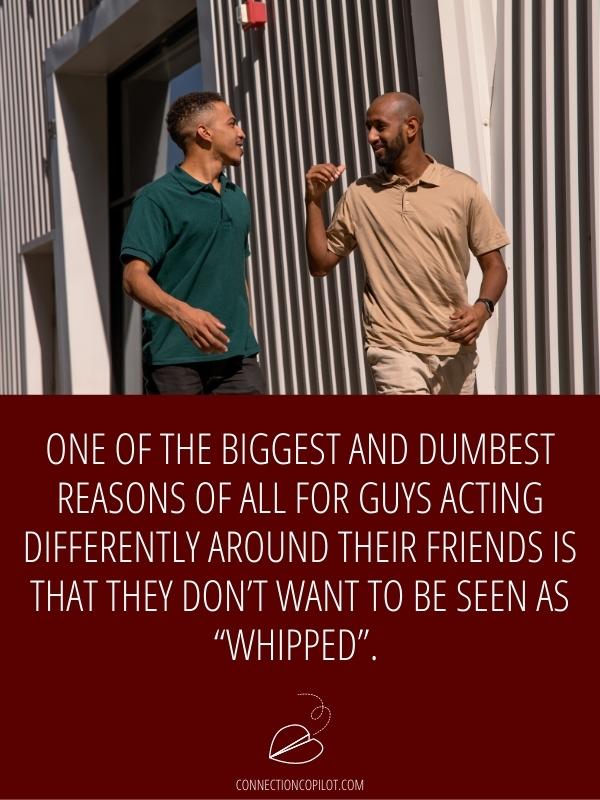 One of the biggest and dumbest reasons of all for guys acting differently around their friends is that they don’t want to be seen as “whipped”.

That’s right ladies: all that strange and/or macho behavior you deal with is simply so his friends won’t view him as whipped.

We don’t know whether to laugh or cry about it… but, hey! It is what it is.

Guys really just don’t want to be seen as whipped by their best buds.

8. His Friends Know Things He Doesn’t Want You to Find Out

When a guy has a close circle of friends, chances are they all have some “dirt” on each other. 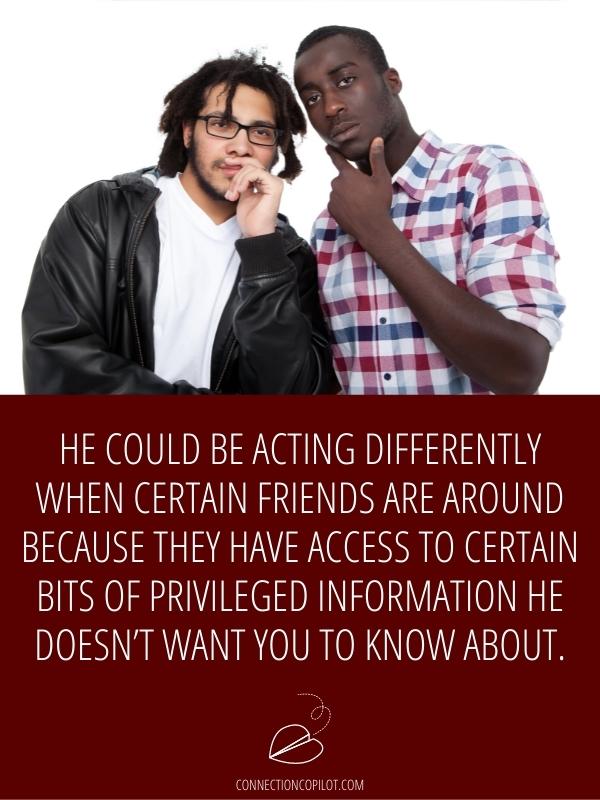 He could be acting differently when certain friends are around because they have access to certain bits of privileged information he doesn’t want you to know about.

In this sort of case, it’s hard to tell just how strange his behavior could get the more he worries about you finding out.

9. He is Secretly “Into” One of His Friends

If a guy is secretly crushing on a friend of his, it could have been happening since long before he even knew you.

At any rate, for however long he’s had a crush on said friend, whenever you’re both around he is liable to act differently even if he isn’t consciously aware of it.

Pay close attention to his behavior when the other friend is around, if you suspect this sort of reason for him acting differently. It may be telling as to which one of you he is actually interested in the most.

10. They Are Afraid or Nervous About Something

Sometimes when a guy is nervous about a situation he may act differently around his friends. The same goes for when he is afraid of some outcome he is anticipating.

What he is actually worried about, and why, you probably won’t know until after the fact.

He could be afraid of one of his friends piquing your interest, or nervous about how his friends will receive you into their circle.

11. He Doesn’t Respect You as Much as You Think He Does

There is also always the possibility that he doesn’t respect you as much as you perhaps thought he did.

We’re not suggesting that having a laugh or two and acting a bit macho with the guys is an indicator that he doesn’t care for you or respect you. 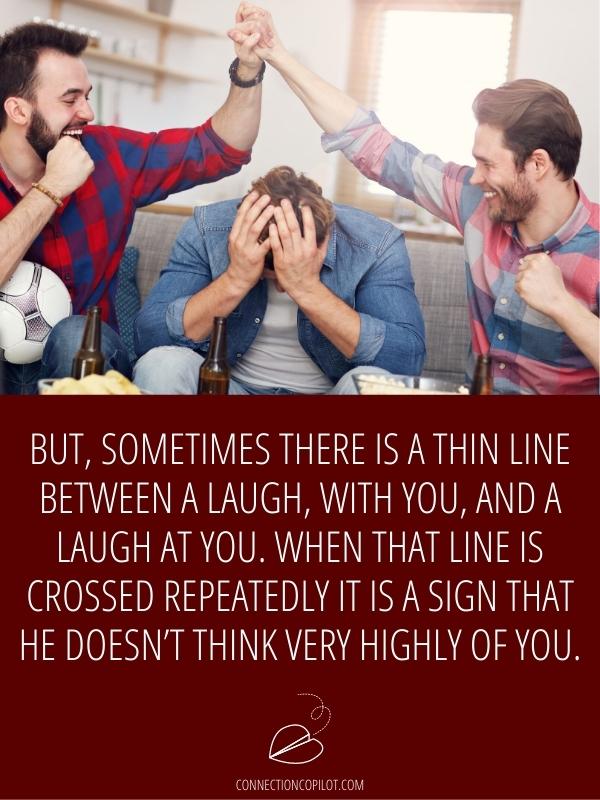 But, sometimes there is a thin line between a laugh, with you, and a laugh at you. When that line is crossed repeatedly it is a sign that he doesn’t think very highly of you.

Why Do Guys Act Tough In Front of Their Friends?

There is really an endless amount of reasons that guys tend to act tough when they get in front of their friends. Guys don’t want to seem weak in front of other guys, so it’s just a guy thing. They may also want to impress their buddies and make them laugh. Also, when you and your guy are around his guy-friends, they may act even more macho. In front of a mixed-sex group of friends, things could be different, but with less bravado.

Guys have a lot of ways to subtly let you know that they are into you. A few of the most typical include when guys try to stay in constant communication with you, are always looking out for you, and are genuinely interested in you and your life. Other hints include pokes, sarcasm, and the occasional red face/foot in the mouth sort of moments during casual conversation.

Why Do Guys Ghost You For Their Friends?

Ghosting their partners to go and hang out with the boys is unfortunately something a lot of guys are known for. As unflattering as it is, some guys would rather avoid contact with you altogether. Until they’re done doing whatever it is that they’re up to with their friends, you’re ghosted. Thankfully, if your guy is mature, you won’t have to deal with being ghosted for his friends!