Have you ever noticed how sometimes guys are sweet and caring and then, wham, in the next second they are a cocky and arrogant version of themselves? Read on below and explore some of the reasons why it happens!

Why Do Guys Act Cocky or Arrogant?

Here are 11 of the most common things it means when guys act cocky and/or arrogant: 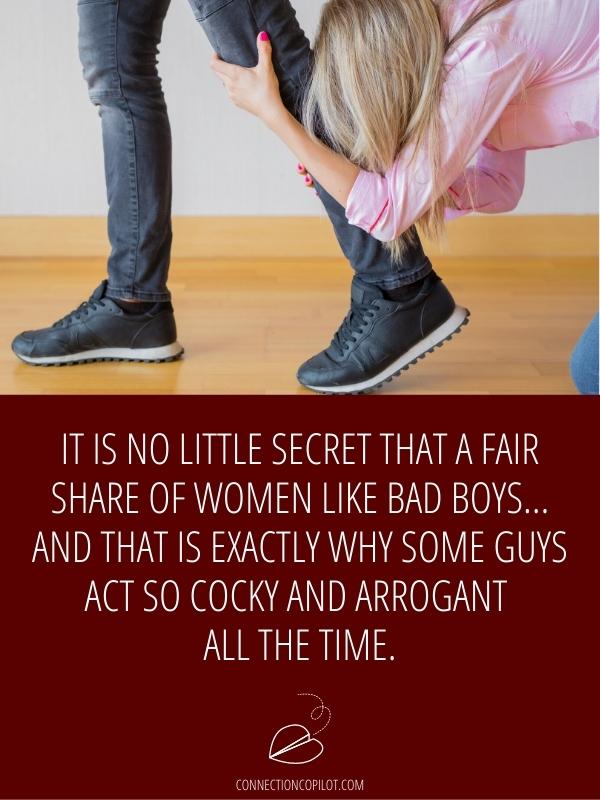 It is no little secret that a fair share of women like bad boys… and that is exactly why some guys act so cocky and arrogant all the time.

Go figure! The very thing that some women literally seek out is one and the same thing that repels others: arrogance and cockiness.

It’s as simple as A-B-C & 1-2-3: he believes you’re sure to naturally be attracted to the bad boy bravado even if you don’t show it.

If a guy is insecure about something, be it his relationship with you or how he looks to “the guys”, he is liable to act a bit cocky.

In his mind, he’s taking defensive measures ensuring his friends don’t smell his weakness and hiding his insecurity from you at the same time.

3. He is a Product of Bully Culture 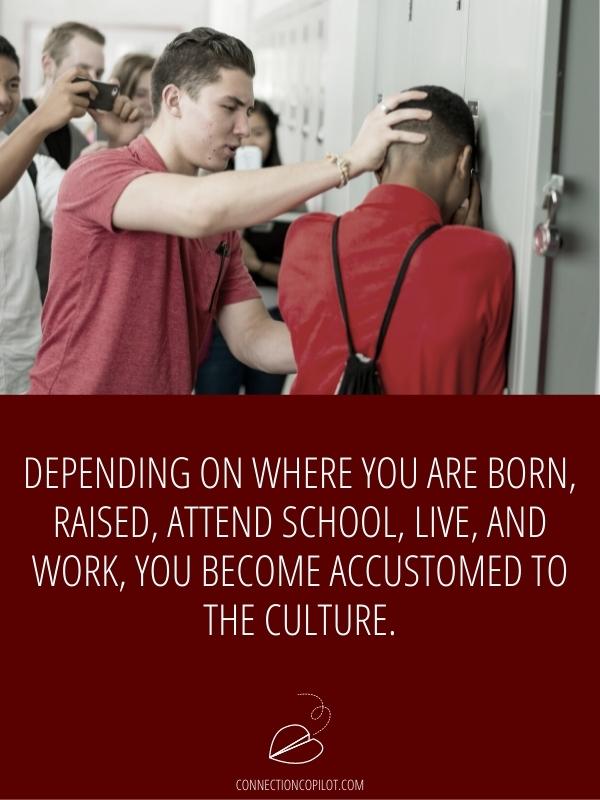 Depending on where you are born, raised, attend school, live, and work, you become accustomed to the culture.

Whether it is a mean older brother, cousin, a friend of the family, or the classic mean kids at school, pro-longed exposure to bully culture cab be the cause of your guys’ cocky nature.

That said; there is no excuse for someone who was bullied to bully other people… and if that’s what your guy is doing you should let him know it’s not ok.

4. Rough Childhood/Upbringing Made Him Cocky

Not everyone had a happy and carefree childhood, and sometimes guys who fall into this unfortunate category develop a cocky attitude.

For example, maybe he’s a mellow guy about most things, but then something reminds him about everything he’s endured, and, boom, he transforms into Mr. A-hole(a for arrogant, of course).

5. He’s Dealing with a Heartbreak 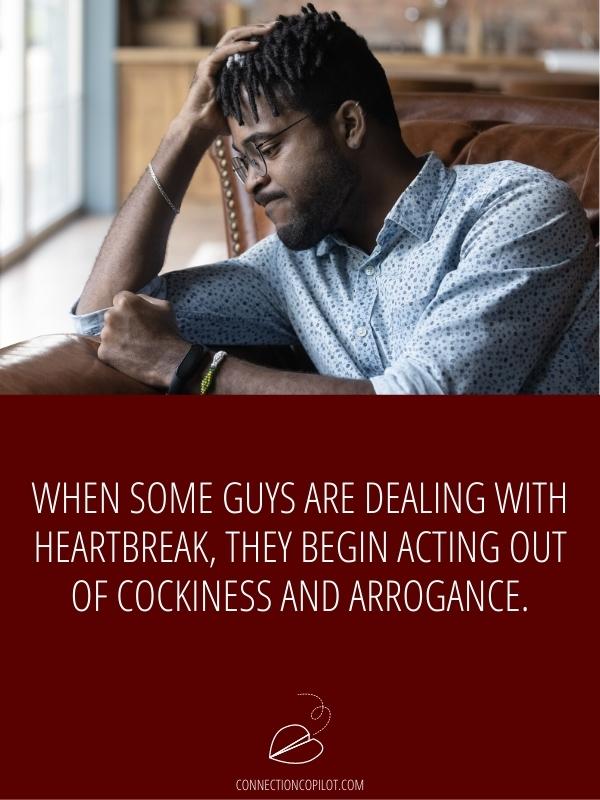 When some guys are dealing with heartbreak, they begin acting out of cockiness and arrogance.

The reasoning behind it is that they are reasserting their importance, and reinflating their self-worth.

Once their self-confidence is back on par, they’re very likely to drop the cocky attitude and get back to normal without further incident.

6. He Has Abandonment Issues

Some guys are sweet and genuine enough… but then they remember that they have abandonment issues and start to fumble everything up in their heads.

When his abandonment issues come to the surface, he may start acting cocky as a sort of self-guard against being left behind again.

7. He Has an Ego the Size of Texas

There may come a time that you find yourself dating an outwardly caring and genuine guy, only to find that he actually has an ego the size of Texas. 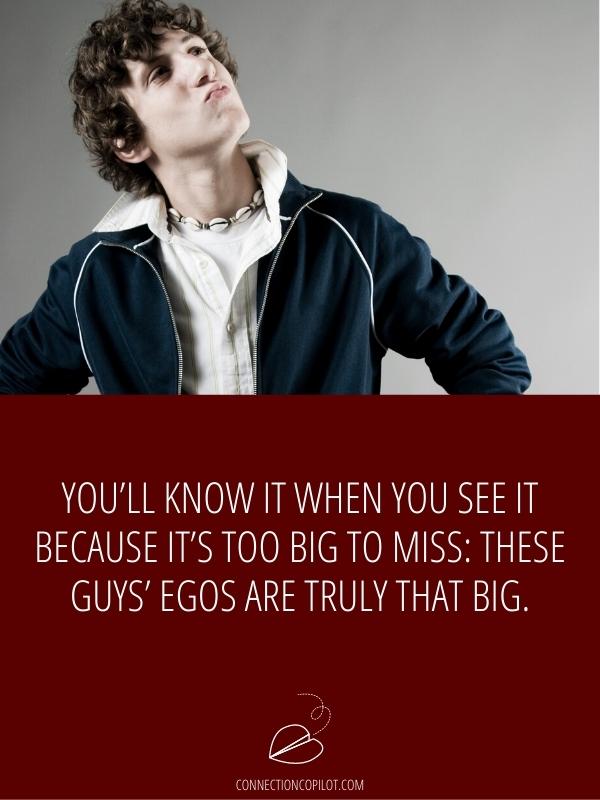 You’ll know it when you see it because it’s too big to miss: these guys’ egos are truly that big.

At first, he’ll be prince charming… but sooner or later the fangs come out and you realize him for what he is: a blood-sucking egotistic and cocky man-child out for one thing, and one thing only… a fan for the fire that is his ego’s internal flame.

8. He Thinks a Girl is Out of His League

When a guy thinks that a girl is way out of his league, but he just can’t quite help himself but try to gain her affection, he may become cocky and arrogant in ways he never even imagined.

He could try to impress her by putting his friends down, making jokes at someone else’s expense in an attempt to create common ground or any number of similarly underhanded strategies. 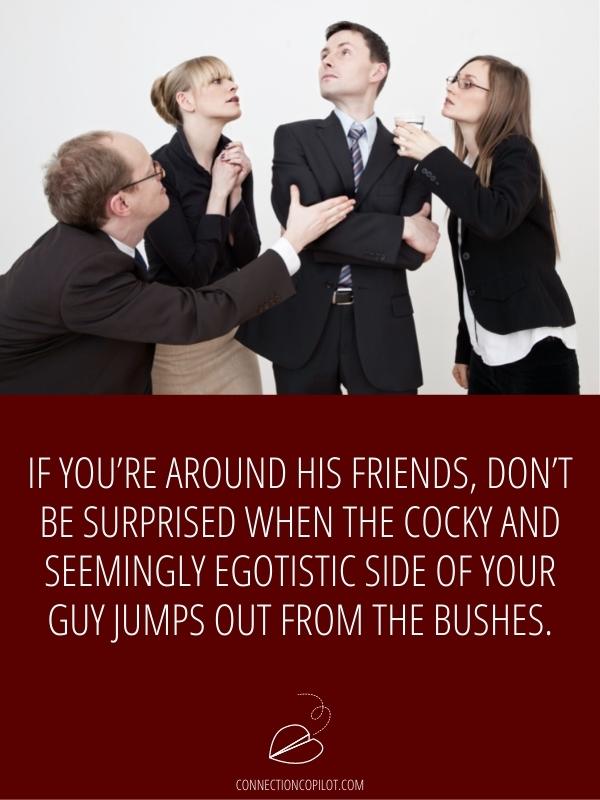 If you’re around his friends, don’t be surprised when the cocky and seemingly egotistic side of your guy jumps out from the bushes.

The good thing is that once the gathering of friends disperses, so will his arrogant attitude.

When he just really doesn’t have the foggiest clue what else to do a guy may start acting cocky all of sudden.

Whether it’s peer pressure, personal issues, or plain old nervousness at being around someone he likes, it’s more than enough to make him a bit cocky even without him realizing it.

In these scenarios, you can hardly hold it against them for puffing up their chests and clucking around!

Last but not least, pun semi-intended, is the sentiment of nice guys finishing last. 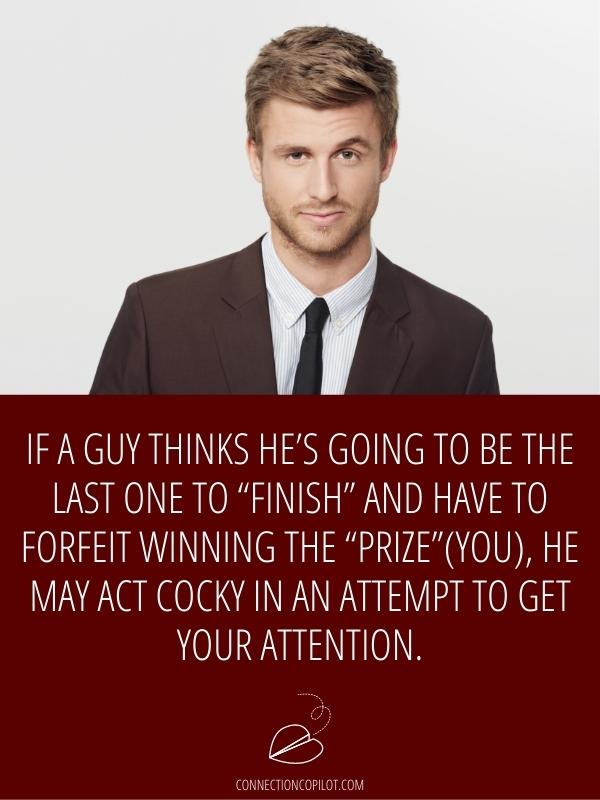 If a guy thinks he’s going to be the last one to “finish” and have to forfeit winning the “prize”(you), he may act cocky in an attempt to get your attention.

It may not be unequivocally true that nice guys always finish last… but tell that to the nice guy sitting back patiently watching you give the lion’s share of your interest to the bad boys.

What Does It Mean For a Guy to Act Cocky?

When a guy gets “cocky”, it means that he is displaying egotistical and conceited behavior. Typical guys who are cocky act out of egotistical and self-centered motives, not out of true self-confidence.

Why is Cockiness Attractive?

Gals may mind guys who are cocky attractive because they associate the cocky nature of the guy with confidence. Sometimes a cocky guy may even be viewed as more intelligent than a more reserved guy. However, there’s no data to show that that’s the case at all.

What is the Difference Between Cocky and Confidence?

Cocky is when guys are conceited, brash, and egotistical rather than merely being self-confident. Confidence, on the other hand, is when a guy has genuine trust in his qualities and ability to make good judgments and take the right actions.