Guys adjust themselves in public, sometimes unaware, other times not-so-unaware.

But, what does it actually mean when a guy adjusts himself in front of you?

Read on below and discover the full truth of the matter!

When a Guy Adjusts Himself In Front of You, What Does It Mean?

Guys aren’t as graceful as women, generally speaking, but, sometimes they are even less graceful than usual.

Why do men fix their junk in front of women?

Here are 10 of the most common meanings:

1. His “Boys” Are in an Uncomfortable Position 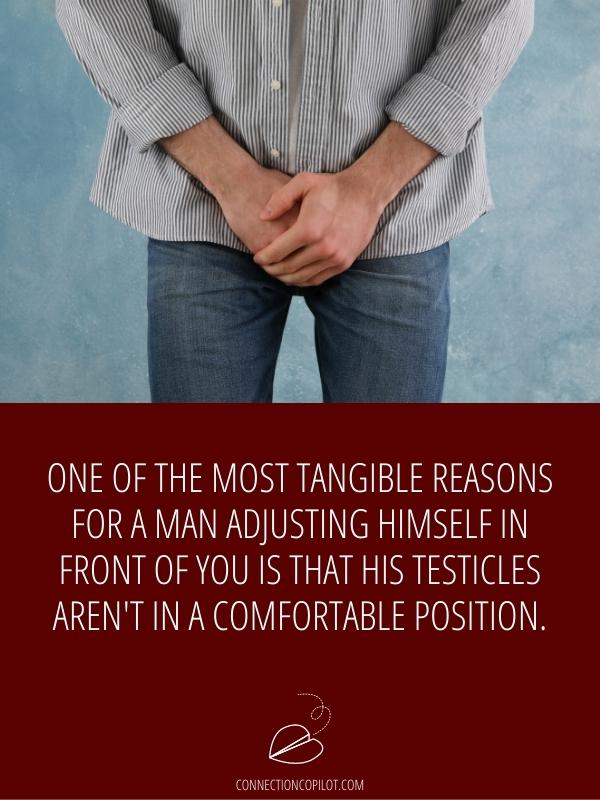 One of the most tangible reasons for a man adjusting himself in front of you is that his testicles aren’t in a comfortable position.

Depending on how uncomfortable his boys are, he may or may not even know he’s adjusting himself in front of you (or care, for that matter!).

2. It Is His Reaction To Your Intense Stare

Another common reason that a guy adjusts himself in front of you is that you’re giving him an intense stare.

He may be interested in you, or in pleasuring himself in front of you. He may also just be messing with your head for staring at him.

3. He’s Sending Signals To Other Guys 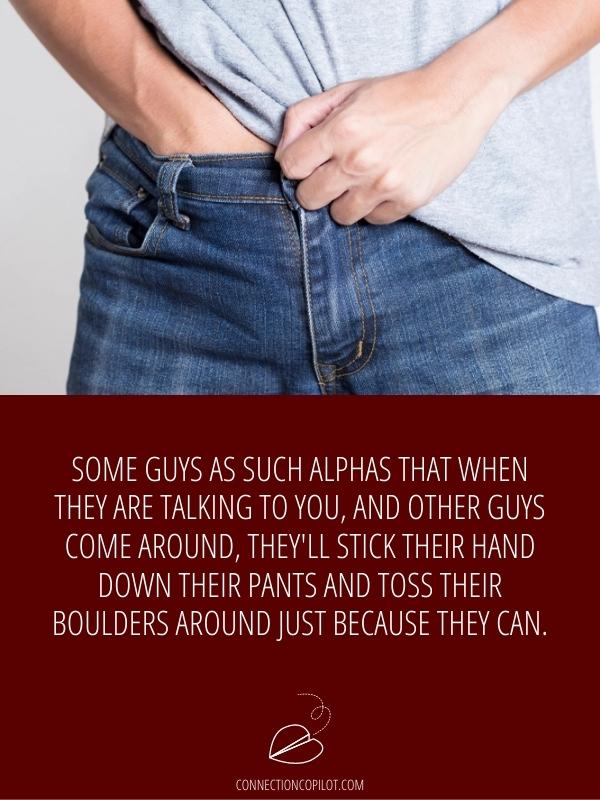 Some guys as such alphas that when they are talking to you, and other guys come around, they’ll stick their hand down their pants and toss their boulders around just because they can.

That’s right ladies, sometimes the reason he’s adjusting himself in front of you is simply to throw other would-be suitors off their game with his macho body language (which obviously means he totally digs you!).

4. Jock Itch Is Bothering Him

If jock itch is bothering your guy, he’s very likely to adjust himself in front of not only you but anyone who’s around when the infamous itch starts to make his boys twitch.

Jock itch, for those unfamiliar, is a fungal infection that causes the skin around his private parts red and itchy (extremely uncomfortable stuff).

5. He’s Fantasizing About You (Or Other Women) 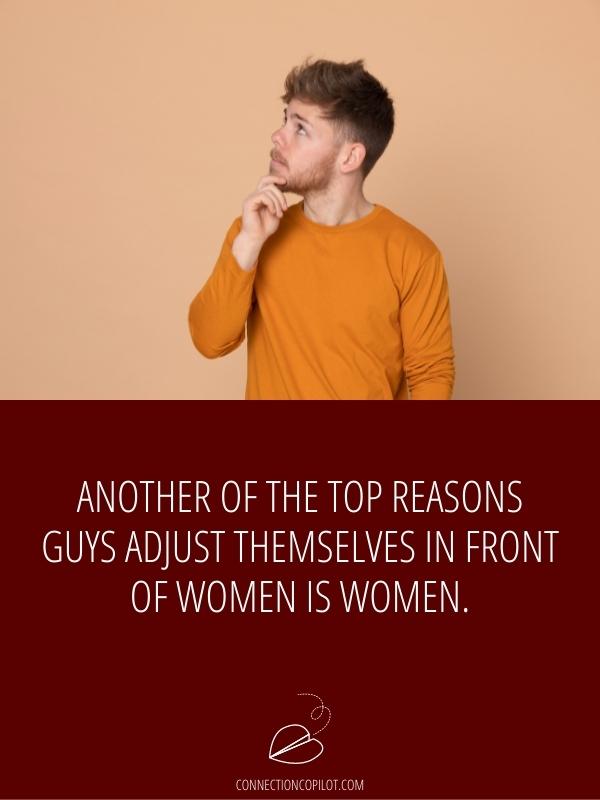 Another of the top reasons guys adjust themselves in front of women is women. Rather, it is their fantasies of themselves with other women that make them reach down there.

The real question in these situations (with hand-down-there type body language) is whether he’s fantasizing about you, another woman, or you and other women at the same time!

6. He Wants You To Think About Certain Parts of His Body

Sometimes guys just want to force your hand. Unfortunately, one of the ways they try to do this is by forcing their own hand down their pants right in front of you.

If he is smiling, rather than looking uncomfortable, or in the other direction, and he doesn’t avoid eye contact, theirs a really good possibility he’s just attempting to give you body language signals that make you think about (or picture) his you-know-what. 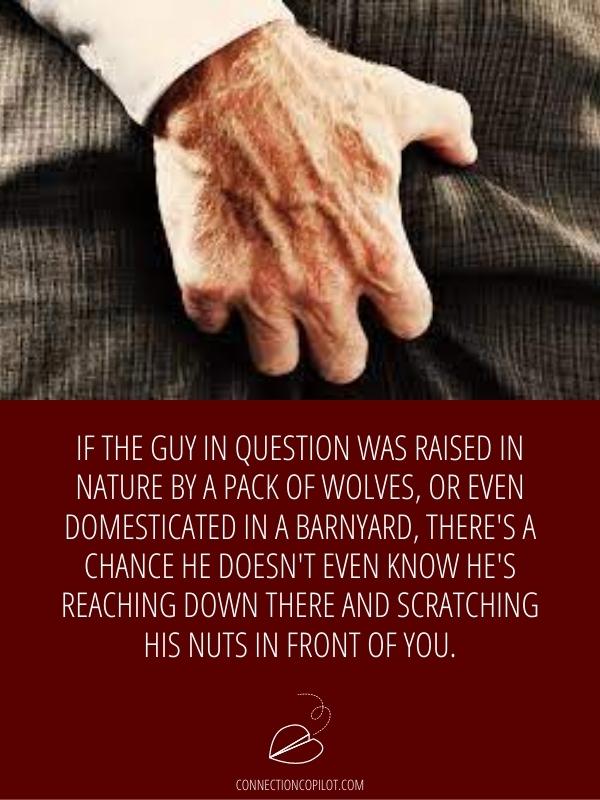 If the guy in question was raised in nature by a pack of wolves, or even domesticated in a barnyard, there’s a chance he doesn’t even know he’s reaching down there and scratching his nuts in front of you.

That said, if he was raised by wolves, he’s likely to like himself clean in front of you, rather than adjusting his boys.

8. He Doesn’t Know It’s Wrong To Touch Himself in Front of Others

This common reason for guys adjusting their dong in public is similar to number 7 on our list, yet it is distinctly different; the possibility that he actually doesn’t know he shouldn’t touch himself in public.

In this case, you have the perfect opportunity to educate him yourself or be an enabler and teach him that touching himself in public is A-ok any old day.

9. He Wants To Change the Topic of Your Talk 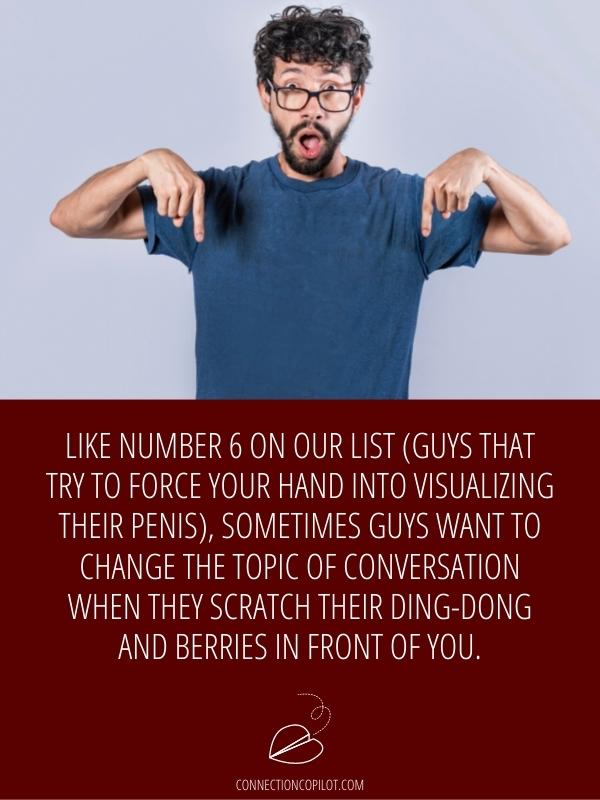 Like number 6 on our list (guys that try to force your hand into visualizing their penis), sometimes guys want to change the topic of conversation when they scratch their ding-dong and berries in front of you.

Whether they think you’ll find it rude, repulsive, or simply send you an “I don’t care what you’re saying” type of vibe.

10. He’s Sticking Something In His Pants

Believe it or not, it happens more than you might imagine; he’s actually sticking something down his pants (not adjusting his penis).

Whether he’s shop-lifting or smuggling plums in his fruit-of-the-looms, is a completely different story.

When a guy uses body language signals like adjusting himself in front of you, there’s likely a good reason behind it (in his mind), but, how you respond to the guy when he does so sets the tone of future conversation (and what you think is ok, and what’s not ok).

Here are a few ways to consider responding to guys that adjust themselves in front of you: 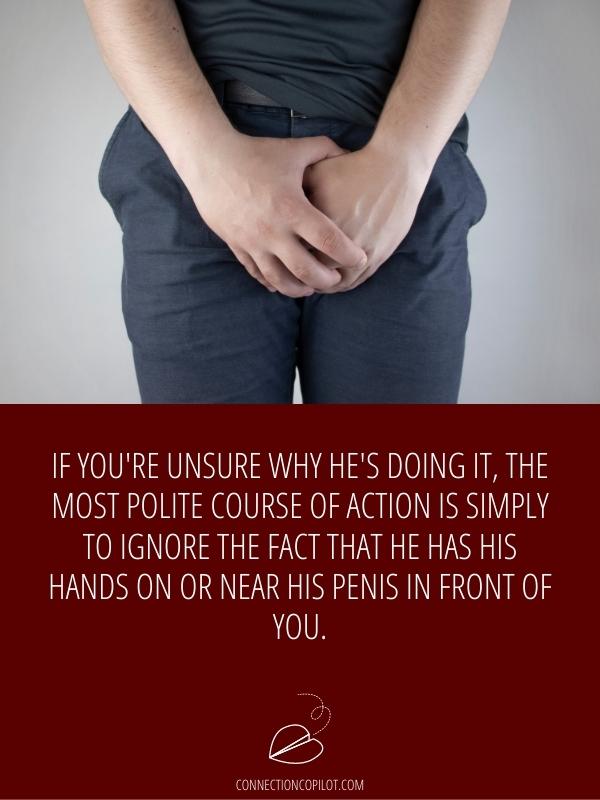 If you’re unsure why he’s doing it, the most polite course of action is simply to ignore the fact that he has his hands on or near his penis in front of you.

He could simply be dealing with an uncomfortable case of Jock Itch… but he could also be fantasizing about you! So, choose your reaction carefully.

Speaking of choosing your reaction carefully, if you don’t like what he’s doing then let him know! Never hide how you feel, even if it seems weird.

Don’t be afraid to address the issue if you are uncomfortable with his action or feel like he is disrespecting you.

Whether their attraction is offensive because they know you have a partner, or you just don’t have a physical interest or romantic feelings towards the guy, let them know!

3. Ask Him If He Needs Help 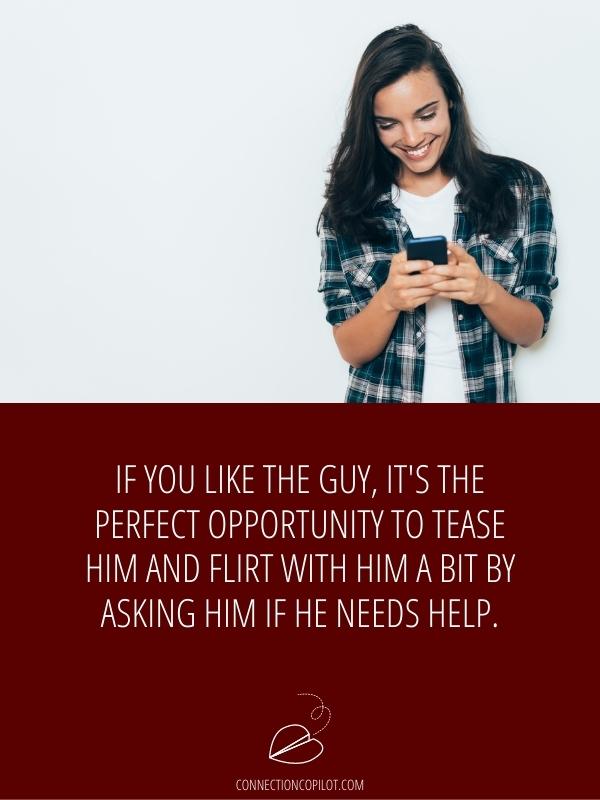 If you like the guy, it’s the perfect opportunity to tease him and flirt with him a bit by asking him if he needs help.

Chances are if he is already showing you body language signals (like putting his hand on his junk while you can see him doing it), he probably won’t mind you asking if he needs help (to say the very least).

4. Look in the Other Direction

You can always simply look in the other direction. This lets him know you don’t want to see him adjusting himself.

Whether you say anything directly, or show any other reaction at all, is absolutely up to you. That said, if you leave them with a shred of doubt about how you feel, it may turn into hope for them and fuel similar behavior.

Why Do Guys Pull On Their Junk?

Guys pull on their junk all the time. That said, half the time they aren’t even aware they are doing it because it is simply a reaction to itching, discomfort, or nervousness. Sometimes, however, guys are touching themselves in front of you to show you they are excited or to tease you.

Why Do Guys Adjust Their Pants in Front of You? 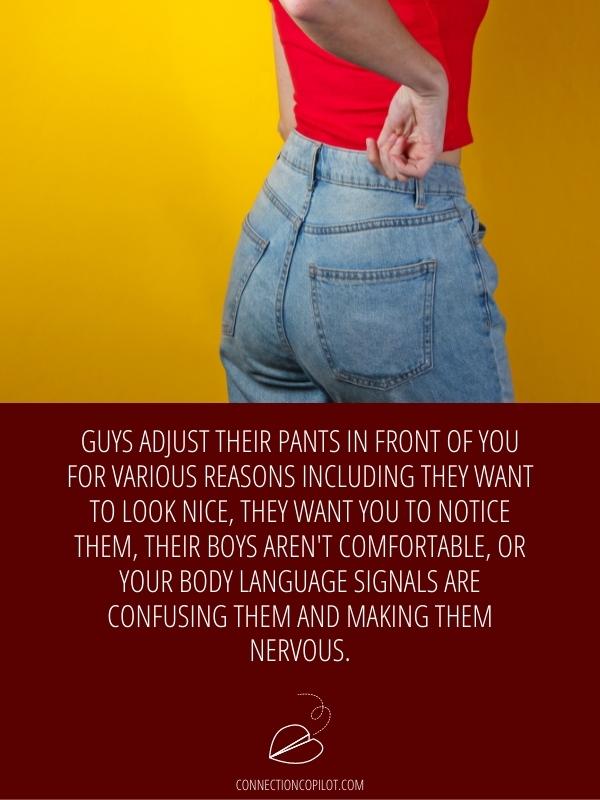 Guys adjust their pants in front of you for various reasons including they want to look nice, they want you to notice them, their boys aren’t comfortable, or your body language signals are confusing them and making them nervous. Even more, sometimes guys are really adjusting their boxer briefs or tighty whities underneath their threads.

What Does It Mean When a Guy Touches You Alot?

When a guy touches you a lot it usually means that he is attracted to you. How attracted he is to you, and why, are the more important questions. It’s possible that the man likes you for who you are as a person, just as it’s a possibility that he’s only interested in a physical relationship with you.

Editor’s Note: If you are under 18 years old, and an adult man touches you or himself on the crotch, it is important to stand up, tell them to stop, and let another adult (like your parents, or teacher) know exactly what happened the moment it is possible.