It has been said for longer than most of us have been alive that men prefer blondes. But, that might not exactly be the truth after all. Read on below and learn why guys don’t like blondes as much as they used to!

Studies have recently discovered that men’s sexual interest in blondes may indeed be teetering. But, according to polls, at least 30-percent of men still prefer blondes over all other hair colors. Men also find blondes healthier-looking and more promiscuous than women of other hair colors.

Special note: it isn’t really hair color that matters to guys. In the end, it’s your personality and who you really are that guys get to know and love!

Beauty is in the eye of the beholder, and so it is with guys and what hair color they like the best. Unfortunately for blondes, and those who dye their hair blonde, that ship may be setting sail for all of the following reasons:

1. Blondes DONT Have All the Fun (And Guys Know It)

The old saying goes, blondes have all the fun… except the old saying is B.S., and just about everyone knows it these days. In days gone by, blondes got all the attention, especially in Hollywood and the media. Men are wise to the fact that a lot of girls dye their hair blonde exclusively for the attention it brings them. 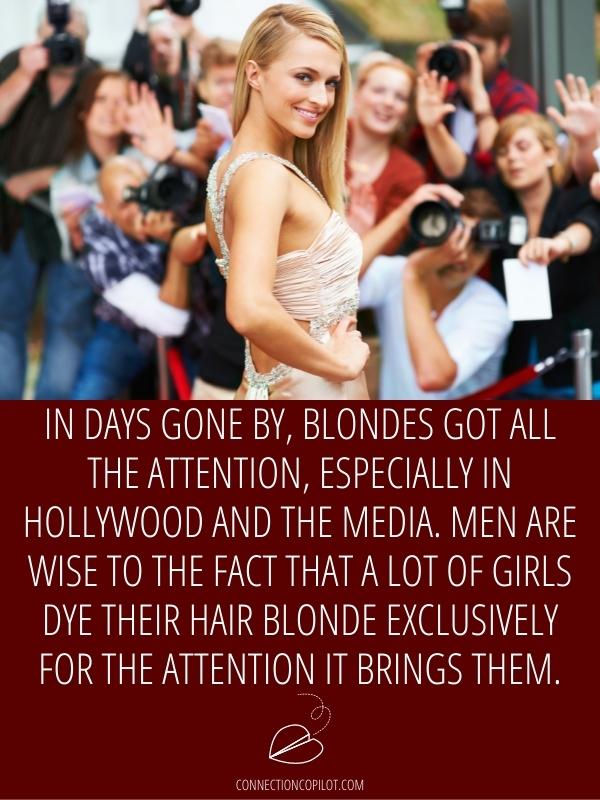 2. Brunettes Are Cuter and Sexier

Today, men are speaking up for themselves, rather than letting society do it for them, and what they’re saying is that they only find blondes equally attractive to darker-haired women, but not more attractive. According to recent polls, over 60-percent of guys preferred women with brown or black hair over blondes.

3. Dark Haired Women Are the Most Sexually Attractive

Not only do men seem to find darker-haired women more attractive in general these days than they supposedly used to, but they also find them the most sexually attractive out of all women. Look out blonde girls, your dark-haired friends just become enemy number one. 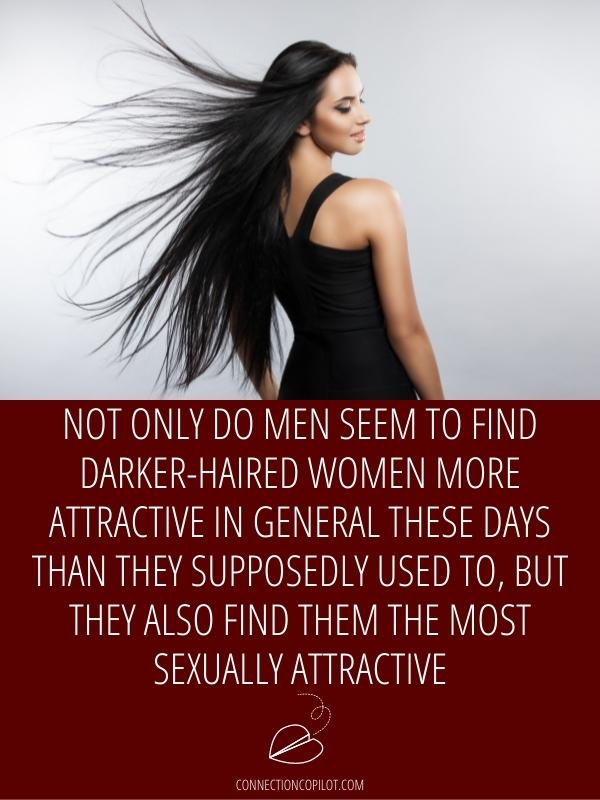 4. They Think Blonde Girls Are Shallow

Guys often find blonde girls as easy marks because they think of them as shallow females who are attempting to play on men’s supposed weakness for blondes. The funny thing is that they simply end up marking themselves as “easy” dates to pick up… which is exactly why you see men flock towards blondes in public… not necessarily because they are seen as more attractive, but because they are seen as easier to get with.

5. They Want Something Different

A lot of guys are downright bored with blondes, especially if they grew up around the turn of the century when every news anchor, movie star, and every other musician was blonde or dyed their hair blonde. They want something different, like brunettes, redheads, and women with raven hair.

Reminder: there is much more to you than your hair color, and any guy who can’t see past that (whether you’re blonde, brunette, or rainbow-haired) doesn’t deserve your attention anyhow!

What Color Hair Do Guys Find Most Attractive?

Do Guys Prefer Blondes or Brunettes?

The long-standing saying is that blondes have all the fun and that guys prefer them. But, lately, the tide is changing in favor of the brunettes. Recent polls suggest blonde hair is losing popularity with the guys, and that brunettes and women with black hair are gaining favor.

What is The Prettiest Hair and Eye Combination?