There is a never-ending plethora of reasons why people act flaky. But, why do guys do it, and how exactly do you deal with flaky men?

Read on below and discover 11 reasons guys act flaky and ways to deal with it!

Why Do Guys Act Flaky?

We’ve all been there before: we’re at the meeting location, we’re waiting, time goes by, and he never shows up. He’s flaked out on us.

Here are some of the main reasons guys say they act flaky:

1. He’s Not Sure About His Feelings 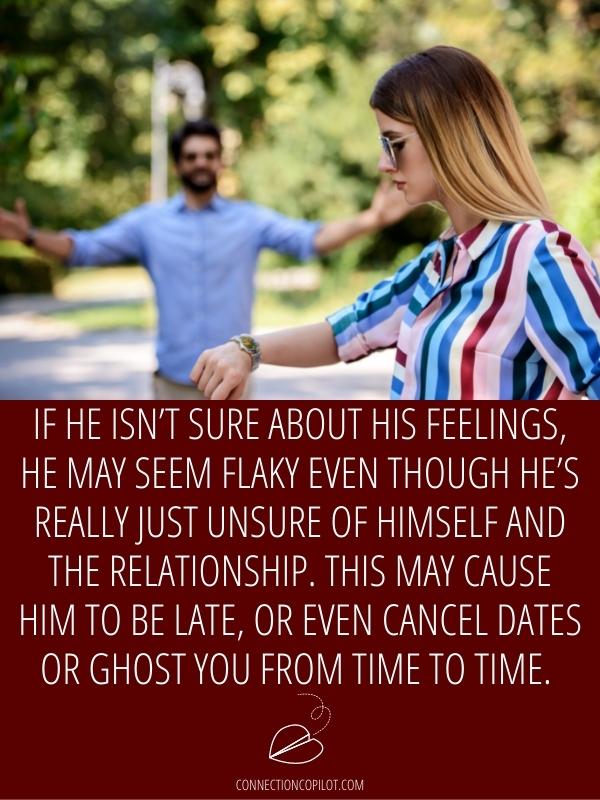 If he isn’t sure about his feelings, he may seem flaky even though he’s really just unsure of himself and the relationship. This may cause him to be late, or even cancel dates or ghost you from time to time. Until his feelings are made up, he’s liable to continue with flaky behavior.

It sucks to even think about it, but the reality is that sometimes people are flaky because they are dating someone else. When they cancel at the last minute, ghost you, or are otherwise acting flaky out of the blue, it’s usually because their other significant other has sprung something on them and now they can’t make it to the engagement/date you had planned.

3. He Wants to Date Another Person 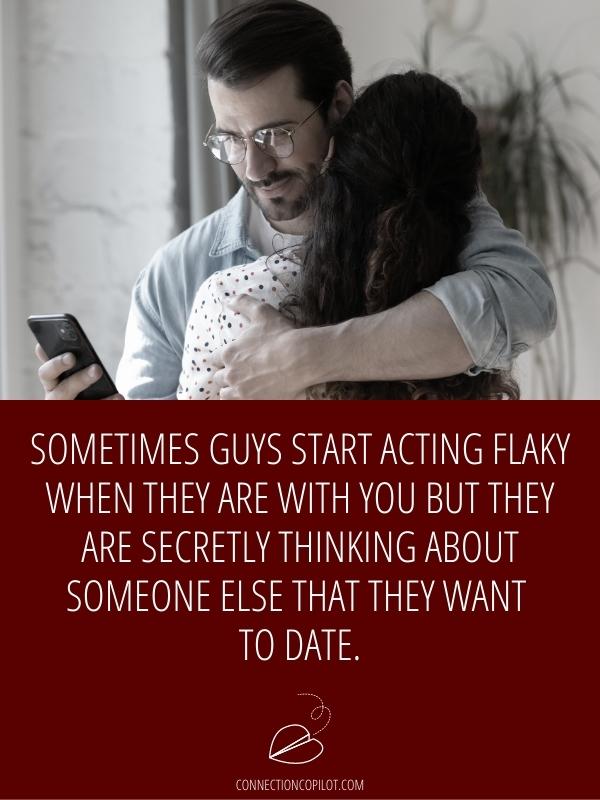 Sometimes guys start acting flaky when they are with you but they are secretly thinking about someone else that they want to date. If they think they may have a chance with said person, they may act even flakier. The sad thing is if the person shuts them down, and you don’t find out about it, they’ll more than likely stop acting flaky and continue on like nothing ever happened.

4. He’s Paying You Back for being Flaky on Him

As the old saying goes: karma is a b, i, t, c, you know what. That’s not always the case, but sometimes it very well may be. If you’ve been flaky with someone before, there are great possibilities there may come a time that they decide to repay the favor by flaking out on you. Moral of the story? Don’t start nothin’, won’t be nothin’!

5. He’s Really Just Not That Into You 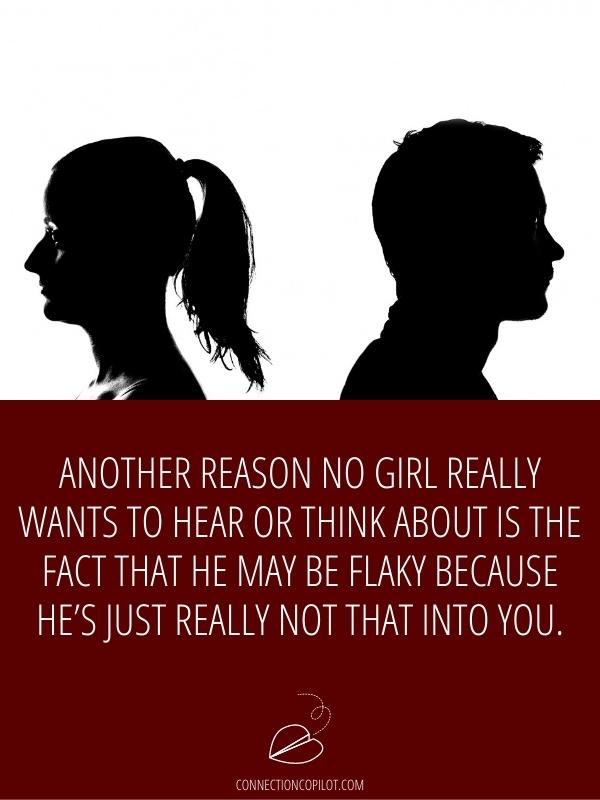 Another reason no girl really wants to hear or think about is the fact that he may be flaky because he’s just really not that into you. It’s sad, and sometimes downright painful, but in the end, there’s nothing to do about it except give it time and see if his feelings change. If he never comes around, well maybe things weren’t meant to be after all anyhow!

6. He Thinks He’s Doing You a Favor

Guys who think they are doing you a favor by hanging out, dating, or being seen together in public, first of all, are jerks, and secondly, tend to be extremely flaky characters. Further, if you find yourself in a relationship with a guy like this there is only one thing to do and that’s run.

7. He Doesn’t Respect Your Time

Flaky guys often don’t respect much, including the time and consideration of other people. It doesn’t even cross their self-ish minds that you could be doing something else rather than waiting for them to show up to a date they forget to tell you they canceled. The thought never even occurs to them that they could possibly waste someone’s time. 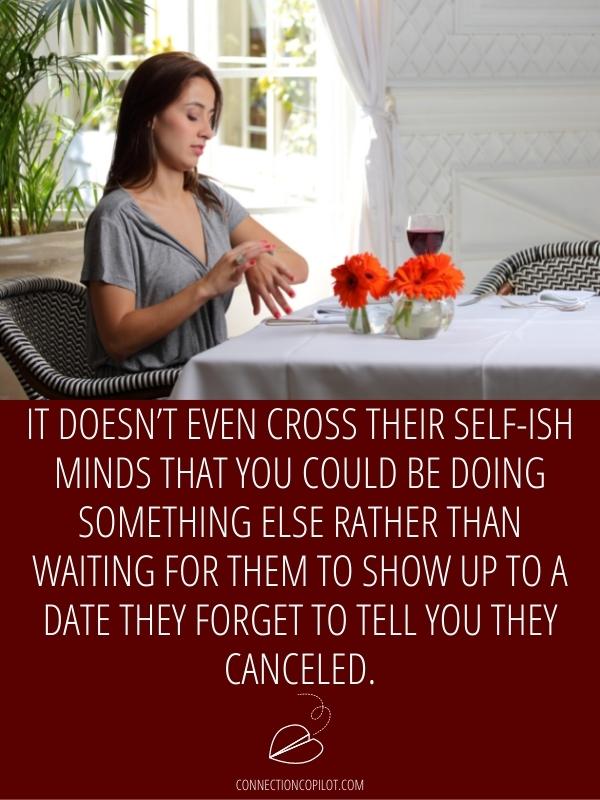 We’ve all heard it: all he wants is sex. Sadly, sometimes it’s true. Thankfully, most of the time it’s not. But, if he starts acting flaky after a while, and you’ve not hooked up, or it’s been some time since you did, it’s a red flag that all he really cares about is getting a piece of that booty.

Believe it or not, ladies, gentlemen, and people of all sexual orientations, some guys really are genuinely shy people. We know, we know, it seems to be getting less and less of a thing but it does indeed still exist: shy guys are really real, and they tend to get flaky when things get too real for them! 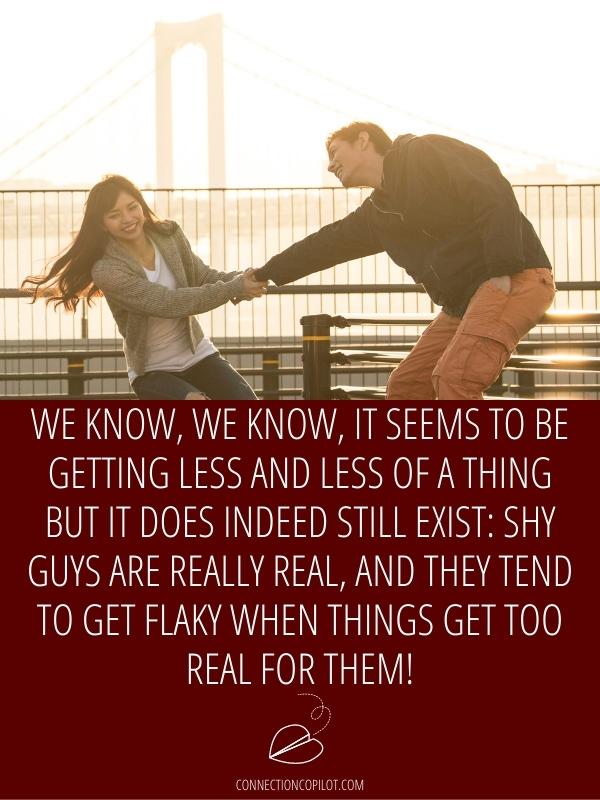 10. He Has Little to Zero Self-Confidence

Speaking of shy guys, there is also a class of guys that exist that have little to absolutely no self-confidence at all. These poor souls often come off as shady flakes thanks to their inability to believe in themselves or that anyone could possibly be interested enough in them to want a relationship. Anytime things progress in a relationship, they are likely to jump ship and ghost you.

11. He Doesn’t Believe You’re Into Him 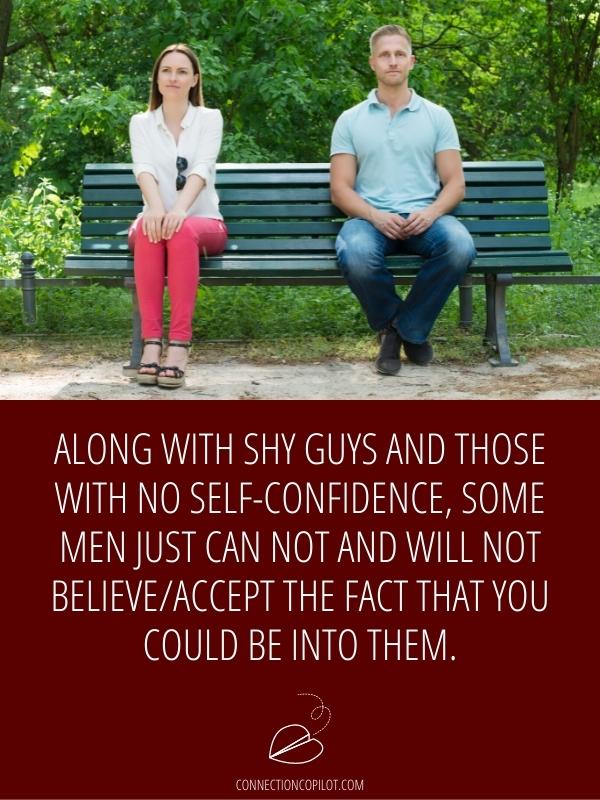 Along with shy guys and those with no self-confidence, some men just can not and will not believe/accept the fact that you could be into them. It doesn’t matter how much you try to convince them otherwise. The only thing that helps is giving them time and continuing to be there and support them. Otherwise… prepare for a bunch of flaky action from them.

What to Do When Guys Act Flaky

When a guy gets flaky with you, there are several standard ways you can respond:

What is a flake in dating?

“Flaking” is when someone backs out of the promise/commitment to do something/go somewhere with you. Typically it happens at the last moment with little to no warning, or reasons. Flaking may also refer to avoiding questions, failing to engage into meaningful conversation, and other similar behavior.

What does it mean when a guy is flaky?

A guy who is flaky will often drop you for his friends or other activities, miss calls, fail to text back, and disappear for hours, days, even weeks or months at a time. They also tend to avoid talking about the future, listening to your plans, or being supportive of your goals/life.

Why do guys keep flaking on me?

There are numerous reasons a guy may keep flaking on you. The real question is how will you deal with it? Continue to allow him to behave in such a way, or demand that he explain himself and begin respecting your time and your shared future? The truth is that guys who are flaking on you may be cheating, interested in others, or just not that into you.